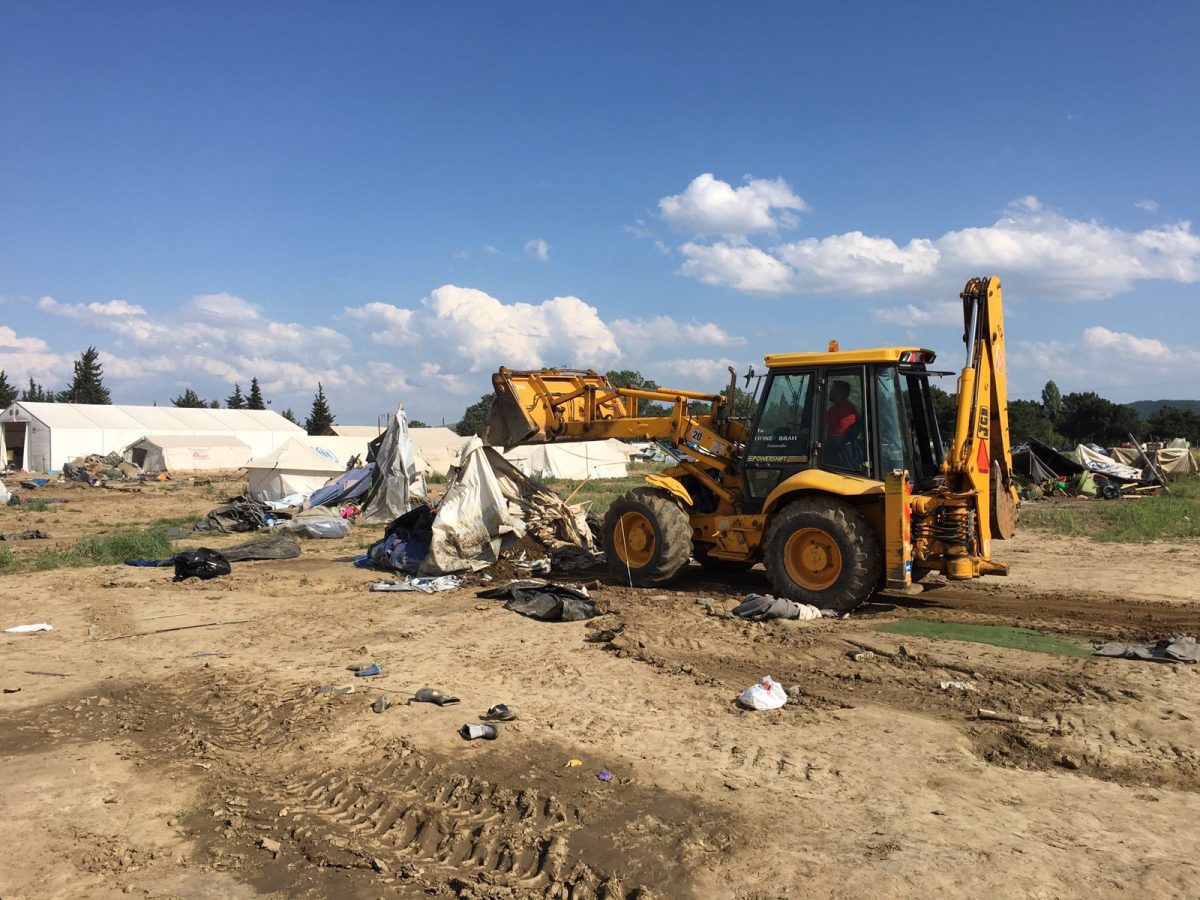 A bulldozer at the site of the former Idomeni refugee camp. (Photo credit: Amir Karimi/MSF)

Greek authorities have emptied the Idomeni refugee camp near the Macedonian border. The operation to move thousands of refugees out of the camp began on Monday and involved hundreds of police. Journalists except for Greek state-run media have been prevented from witnessing the operation up close.

The humanitarian aid organization, Doctors Without Borders – also known by its French acronym, MSF – has been providing services to refugees at the camp ever since Macedonia shut its border with Greece, effectively sealing a key Balkan migration route for those headed to Austria and Germany. At its largest point, the camp housed as many as 11 thousand refugees in tents without fixed infrastructure. The former inhabitants are part of a larger number of some 54 thousand refugees trapped within Greek borders. FSRN’s Shannon Young spoke with Katy Athersuch, MSF Emergency Communication Manager in Greece, who is currently in Idomeni.

Shannon Young: Can you start by explaining where things currently stand with the situation at Idomeni?

Katy Athersuch: As of today, the camp is now completely emptied. This evacuation started on Monday. A large, very, very large  — more than hundreds, in fact, I think there were thousands of police that were deployed in Idomeni camp. So the camp became completely under police control. Around four or five police people were going from tent to tent, telling people, “Pack up your things and get on a coach.” They weren’t given information about where they were going, what was happening next, and the atmosphere was definitely one where people didn’t feel that they could ask questions or argue.

So, it proceeded incredibly quickly, I mean, we, ourselves, were very kind of shocked and taken aback at how quickly the camp emptied, and how it did so without any resistance, really, from the population. There’d been clashes before, where people had protested and different things, but the sheer number of police, and the fact that these weren’t just regular police people, but some of them were special forces, meant that the evacuation happened in a way where people were just very quiet, very calm, but were also coming to us to express a lot of anxiety and a lot of fear and concern.

SY: Greek authorities themselves have used rather optimistic speech about the operation went, saying it’s gone better than anticipated. Was there any on-the-ground warning or coordination with frontline humanitarian groups prior to the start of the relocation?

KA: No, and that for us was a massive concern. I mean, the first we really knew about what would happen was on Monday morning when the police arrived. And, at that point, our numbers of staff that could enter into the Idomeni area was drastically reduced. It was very tense, and also, we had lots and lots of people coming to us and saying, “Where are they taking us? What will happen? Will you be there?” Really, really anxious people who built up relationships with MSF staff of the number of months that they’ve been trapped here since the borders completely closed. But we did not have any information to provide them with. We were very much not involved in the planning of this evacuation.

SY: And of course, the big question remains: where will the thousands of people that have been moved out of the camp go now?

KA: That is a big question. The Greek authorities have announced the names of a number of camps which will be in this area of northern Greece, the Thessaloniki area. They’re moving people by nationality, so there is a Syrian camp, a Kurdish camp, for example. We heard reports, just a few hours ago actually, that two buses of Afghan refugees had been returned to the kind of Idomeni area, at a petrol station or gas station nearby, where some other people, other refugees, are already living. There’s maybe around 1,000 refugees — no, probably more like 3,000 refugees — living in this gas station. And two busloads of Afghans will return there today, because apparently they refused to enter the new facilities.

SY: In light if the EU/Turkey deal and since people are being divided up by nationality, is it looking likely that people who are not Syrians, may in fact be deported?

KA: That is absolutely the fear of non-Syrians. For a number of weeks now, people — non-Syrians — have been coming to us and expressing a lot of concern about what they perceive to be very discriminatory policies. People from Afghanistan in particular are very upset by the fact that at the moment they’re not considered to be refugees in the same way. And, the papers they are given, the allowances that they’re given, as compared to Syrians, are very much reduced. And for them, they really feel discriminated; they feel that the offices they’re supposed to interact with only speak — they’ll have Arabic translators, but not Farsi translators or Persian translators. So, there’s a deep feeling of discrimination among the different groups, and that’s also very unhelpful because it ferments tensions between the groups, because there’s a real perception that, you know, if you’re from this nationality then you’ll be treated in this way, if you’re of another nationality then you won’t be listened to and you won’t have your voice heard. We did interviews interviews with a number of Afghan families, and they really have fled violent conflict, you know, they’re running, really in fear of their lives. And Europe is dealing with them in this really inhumane and unfair way.

SY: Ironically, the emptying of what was one of the largest — if not the largest — refugee camp in Europe came as government representatives and humanitarian aid organizations were meeting in Istanbul as part of the first-ever World Humanitarian Summit. Your organization, Doctors Without Borders, announced it was pulling out of the summit just weeks before it opened. Can you explain more about the overarching reasons?

KA: Basically, we’re talking about a summit that’s being hosted in the context of really increasing violence against medical staff, patients, you know, from Syria, to Yemen, to South Sudan. We’re also talking about a context where we have blocked borders so that civilians who are fleeing from conflict are trapped and not able to access safety and to get out of the way of bombs that are literally falling on their heads. And we’re also talking about what’s happening in Greece right now, with the inhumane treatment of refugees. And, in the midst of all of this, a World Humanitarian Summit that seeks to put nongovernmental organizations and the UN, on a par with member states and say governments and nongovernmental organizations should all make commitments — non-binding commitments — to humanitarian norms and principles, it just seemed to us too much of a fig leaf of good intentions when these basic principles are being violated on such a large scale. And there’s nothing, there’s not enough that was strong or binding, that would actually be able to improve the humanitarian situation, and the functioning of the humanitarian system, which we do see to be in crisis.

Katy Athersuch is with the Greece-based office of Doctors Without Borders. She spoke with FSRN’s Shannon Young by cell phone from Idomeni.