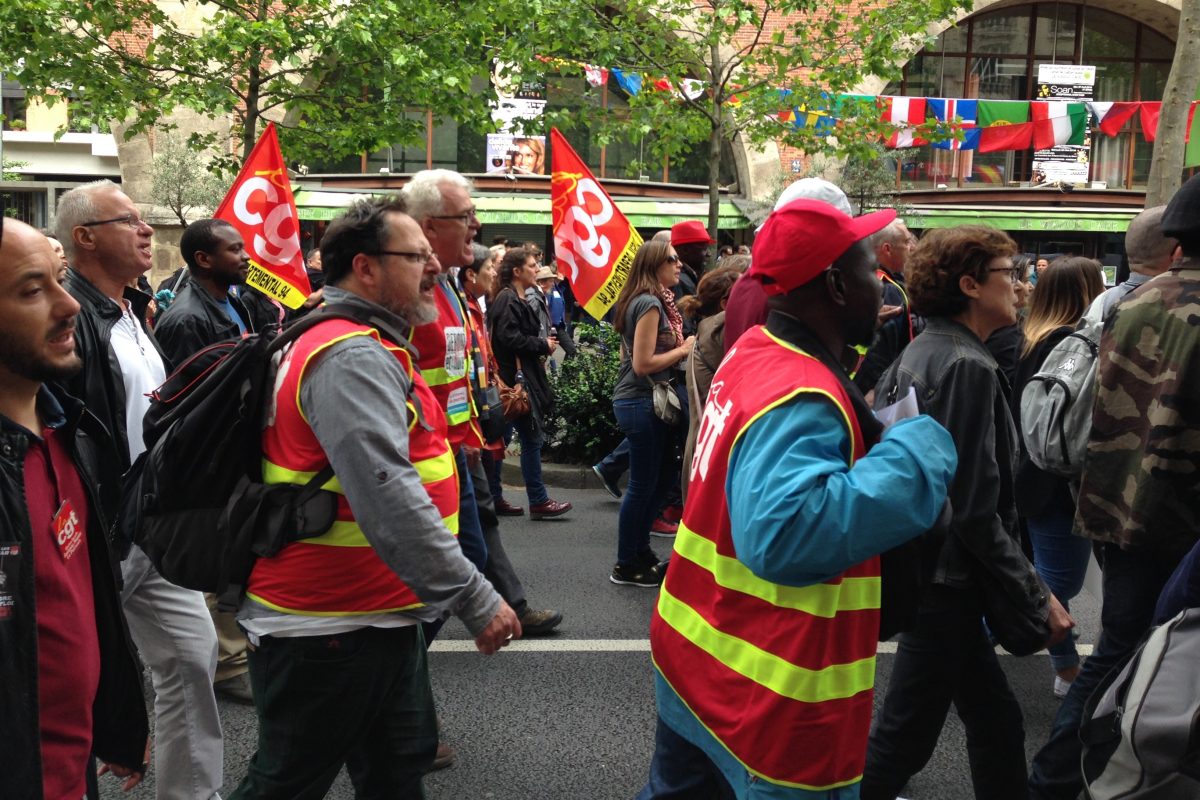 After more than two months of regular demonstrations across France, opposition to a new labor law has intensified. Strikes and blockades at petroleum refineries began last week; this week they spread to nuclear plants. The new wave of protests began after President François Hollande made a constitutional end-run around Parliament and enacted the labor reform by decree. Tens of thousands took the streets of Paris again this week. Raphaël Krafft was there.

“All together, general strike!” chant the demonstrators at a rally in Paris. They belong to the Confédération Générale du Travail, or CGT, the largest trade union in the country. The French government accuses the CGT of radicalization for organizing most of the ongoing blockades at refineries and more recently, at nuclear power plants. But the CGT is not acting alone, they are joined by Force Ouvrière, another trade union.

Manuel Valls, the French prime minister, says the blockades are illegal and justifies the use of force to evacuate them: “Demonstrating is legal, but blockades of fuel depots pose security and legal problems. Enough is enough. It’s unbearable to see that happening. That’s why our answer to the union’s behavior will be extremely firm. We will continue to evacuate the fuel depots that are blocked by this trade union.”

Police using water and canons and tear gas are breaking up the blockades, while demonstrators are burning barricades and persist in protest.

They say “the real vandals are the state and the bosses.” It’s a real arm wrestling contest between a government not willing to change a single comma in the law, and trade unions that seem ready to bring the the country to a halt at the eve of the month-long European soccer cup set to begin here in early June.

“We are not radicalizing the movement,” says Noël Le Chain, a representative of the Confédération Générale du Travail. “We have been calmly demonstrating for two months, with very limited strikes, to ask the government to come back to the negotiating table with trade unions. The government refused. So we just moved to a higher stage with the strikes and blockades, so we will be heard. And if this doesn’t work, we’ll go even higher ahead of the European soccer cup.”

Le Chain did not wish to be precise about what this “higher stage” might be.

On Thursday, as many as one-third of France’s filling stations were reportedly either out of gas or running low, and officials say they have dipped into strategic fuel supplies. But so far rail transport has suffered little disruption and strikes in nuclear plants will probably not provoke power cuts.

According to recent polls, a majority of the French population supports either abandoning or revising the labor law. More than 60 percent hold the government responsible for the current blockades. And while voices inside the government indicate that the most controversial clause in the law undermining national agreements might be changed, Prime Minister Manuel Valls has rejected any such move.