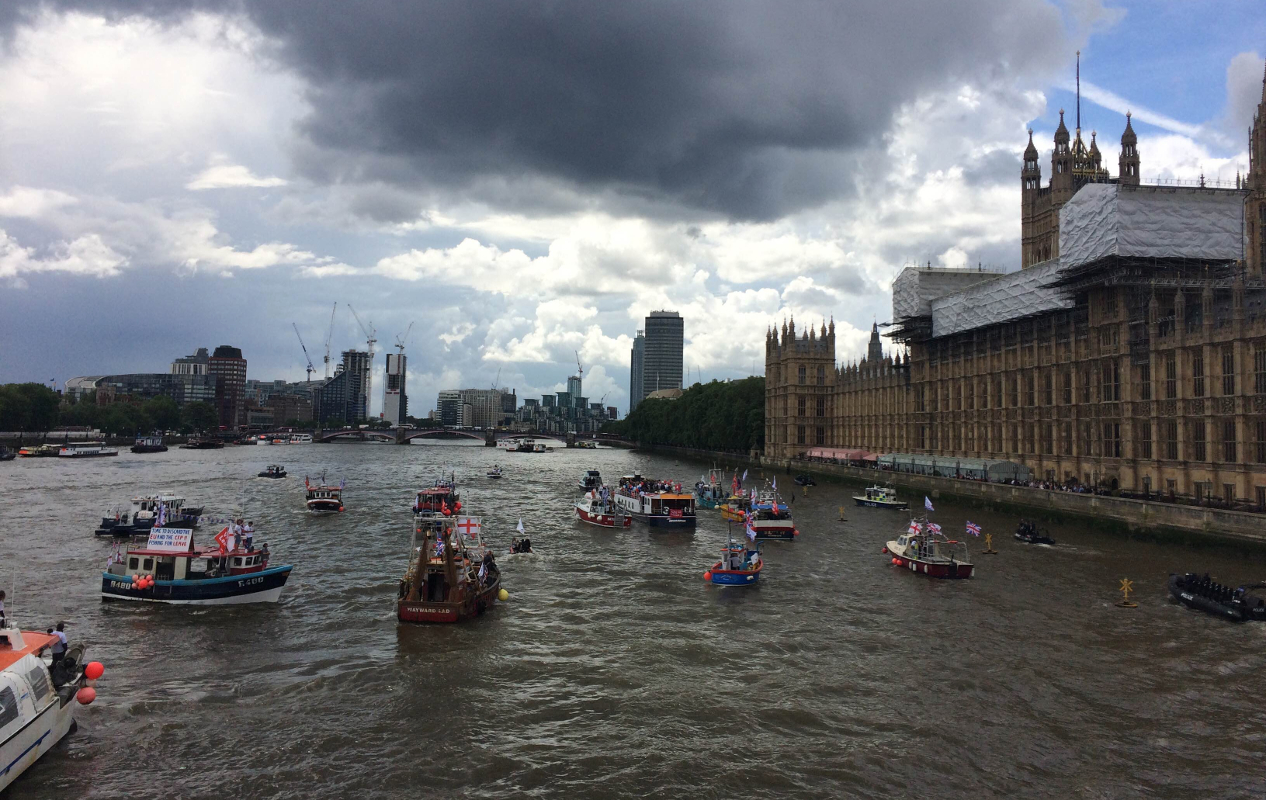 Political shockwaves are coursing through the UK after a member of parliament was killed Thursday. MP Jo Cox was both shot and stabbed while walking to a meeting with constituents. Cox had been actively campaigning ahead of Britain’s upcoming referendum in which voters will decide whether the country should remain in the European Union. An advocate of the ‘Remain’ vote, ­it’s unclear if her position on the referendum was in any way linked to her murder. Election officials have suspended campaigning ­­just days ahead of the vote. But until the somber turn of events, the lead up to the vote had been spirited, to say the least. Andrew Connelly reports from London.

The campaign for Britain to leave or remain inside the European Union turned into a media spectacle Wednesday with a naval skirmish on the River Thames. For months the polls between remaining and leaving the 28 nation bloc have been tight, though in recent days the Brexiteers have lurched forward by a few points.

The demonstration, which included a flotilla of dozens of fishing vessels from gigantic mackerel trawlers to little wooden tugboats, was organized by commercial fishermen who are also militant Brexit supporters – they claim that EU fishing policy has decimated their industry with punishing enforced quotas.

“We’re not allowed to catch certain species, unable to supply our local towns and villages with what lives on our seafront and our areas, which has cost jobs and changed people’s lives forever. Small fishing communities have completely collapsed,” says 50-year-old Matthew Smith, part of a contingent of fishermen standing on the Westminster Bridge outside the House of Parliament, supporting the flotilla.

Smith operates fishing boats between Leigh on Sea in the south east of England and Norfolk in the north, a job he’s been doing since childhood.

“The other European vessels catch and fish most of our stocks in our waters, which has destroyed the fishing ports and infrastructure to the fishing industries, which is thousands and thousands of jobs related which have gone since we joined Europe,” says Smith. “And we are facing absolute disaster if we don’t get out. We need to leave and we need to take our quotas back.”

One of the standard bearers of the Brexit movement is Nigel Farage, leader of the right-wing populist group the United Kingdom Independence Party, or UKIP. Never one to miss a publicity stunt, Farage stood aboard one of boats in the armada. But what started as a protest, descended into a full scale nautical battle as a large boat piloted by Irish rock icon and former Boomtown Rats singer Sir Bob Geldof loomed into view carrying a deck full of Remain campaigners.

Equipped with a deafening sound system, Geldof chased Farage and the fisherman down the river screaming epithets and insults.

“You are no fisherman’s friend,” Geldof says, denouncing Farage as a hypocrite for barely attending any meetings on the fisheries committee in his role as a member of European Parliament, and claiming that the British fishing industry gets a good deal from the European Union.

But what’s the truth? Over to some more sober analysis from Dr. Bryce Stewart, a fisheries biologist at the University of York.

“Most of the fish that are caught around Europe are very mobile, so they are swimming between different countries’ waters constantly. They might be breeding in one country, growing up somewhere else and then migrating through several different countries’ waters,” Stewart explains. “So shared management of the fish stocks was always going to be essential and it would continue to have to happen, even if we left Europe next week.”

Diverse, migratory, flourishing in other European countries – all terms that could equally apply to the British, as well as the fish, qualities that may be imperilled post-Brexit. But the fishermen will not be convinced otherwise.

Robert Butters is a fisherman from Felixstowe. He’s 33-years-old, but the economic pressure makes him wonder if his family’s fishing tradition will stop with him.

“I would be ludicrous if I had any kids and you wouldn’t want to pass it on to them as it wouldn’t be viable,” Butters says. “We throw back hundreds of pounds of fish a day when we go fishing because we don’t have the adequate quota. It costs us money to go fishing, to try to make a living. We do it for our life because we enjoy doing it. We work hard and get treated not as fair as what prisoners do.”

The afternoon draws in but the aquatic hijinks continue with rival campaigners exchanging carefully chosen music reflecting their political aspirations, from the Brexiteers dreaming of a great escape and the Remain side pleading for them not to go.

But whatever lighthearted absurdity the Thames stunt brought to the Brexit debate quickly evaporated Thursday afternoon, after the murder of Member of Parliament Jo Cox. The 41-year-old Labor Party MP was a vocal supporter of remaining in the EU and had floated on a raft down the Thames the day before with her husband and two young children. Both sides suspended their campaigns after a man fatally shot and stabbed Cox on her way to a meeting with constituents.

Jo Cox was a widely respected figure, with a strong human rights background and compassionate and inclusive beliefs. In a campaign defined by increasingly hostile rhetoric over immigration, her tragic death may provide the briefest of moments for Britain to reflect on what kind of society it wishes to be.