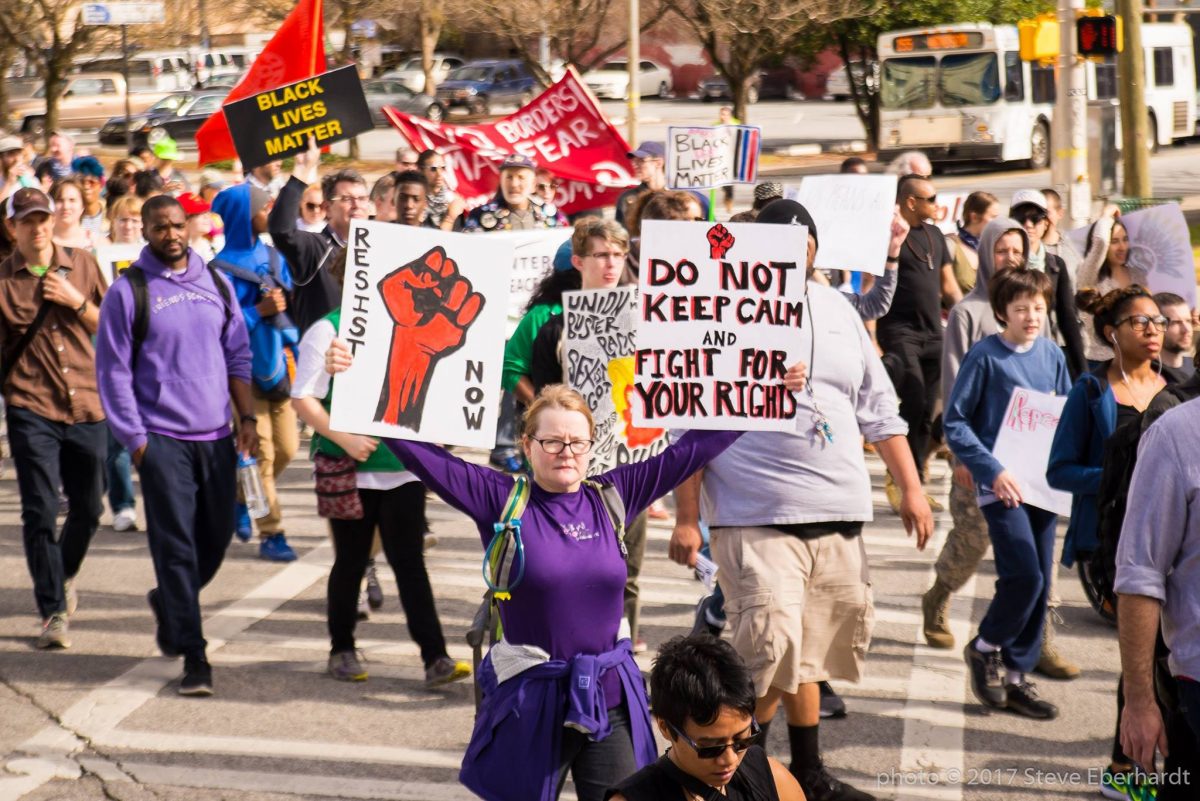 Georgia has become the latest state to take up legislation seemingly designed to have a chilling effect on First Amendment rights. Georgia’s State Senate passed SB1 earlier this month and the bill is now before the lower house of the state’s General Assembly. It goes further than many of the other so-called ‘anti-protest bills’ introduced in other states, by expanding the legal definition of domestic terrorism and creating a state-level Department of Homeland Security with surveillance and intelligence sharing capabilities.

For more on SB1 and its implications, FSRN’s Shannon Young spoke with Azadeh Shahshahani, legal and advocacy director at Project South, a grassroots social justice organization based in Atlanta.

Azadeh Shahshahani: It widely expands the definition of domestic terrorism in a way that would allow law enforcement to target groups of citizens who demonstrate in public places. So, for one thing, it vaguely suggests that efforts to advance any belief could be categorized under a new definition of domestic terrorism. It also broadens the definition of terroristic threats to include actions “with the purpose of otherwise causing serious public inconvenience.” The concern is there is no clear definition of a public inconvenience and there’s no clarity on who or what agency gets to define what this entails. Obviously, we are concerned that this bill will be used as a mechanism to further crack down on the rights of people who want to exercise their First Amendment right to protest.

SY: Thrown in at the end of one of the sections of the legislation is quote: “This Code section shall not apply to constitutionally protected speech or lawful assemblies.” Do you find that reassuring?

AS: No. That language is there, but if there’s some type of an activity – potentially violent activity – at one of the protests, the other people at the protest who may not be really involved or behind the violent action could similarly get targeted. That language, in the context of a broad bill that is designed to crack down on freedom of speech, provides to assurance to us.

SY: Now, you’ve outlined your concerns about peaceable assembly and the right to protest, what about due process concerns?

AS: Right, exactly. Agencies under this bill will be required to share information about known or suspected terrorists, and SB1 provides no access to the right to due process for anyone on this list to appeal mistakes or to be removed from this list. Already, we’ve seen what has happened with the No Fly list and the various watchlists on the federal level, where there was zero to minimum due process for people who were often mistakenly placed on this list, and how really their lives are wrecked on multiple levels. And so now we’re seeing a copying of this at the state level.

SY: The bill also has lengthy sections on surveillance and subpoena powers. Can you sum up some of the broader points?

AS: Right, so this new Department of Homeland Security that is going to be established on the state level has been empowered with monitoring and sharing information about people who could be suspected of engaging in acts of terrorism. Already, we’re seeing, on the local level especially, a move towards monitoring of free speech activities. Just a few weeks ago, we heard reports about Muslim activists being approached by local police and interrogated for half an hour about their political beliefs. And then, when we followed up with them, the local police mentioned that this is part of an outreach effort, which very much sounds like massive surveillance efforts to us. The concern is that this new legislation, with this new Department of Homeland Security, with the new commissioner, all of the new officials that are going to be based there, are going to have even more power to surveil our immigrant, Muslim and activist communities.

SY: Some have painted this legislation as an anti-hate crimes bill. This comes as Jewish Community Centers and mosques around the country have reported incidents ranging from bomb threats to arson to vandalism. There have even been cases of violence used against South Asian immigrants, who have been targeted by perpetrators who are mistaking them for Muslims. Do you see the political will in Georgia to really go after hate crimes and is this bill conceivably part of that?

AS: Well, unfortunately I don’t think this bill is going to do anything on that front. I think the hate crimes and unfortunate hateful rhetoric that we’re seeing targeted by hate groups in our communities, is very much tied to the hateful and racist and Islamophobic rhetoric that has been coming down on the federal level since before the elections. You can’t divorce the two… We have a president who has made it a priority to target, both in terms of rhetoric and in terms of policies, Muslim communities and communities of color and queer and trans people, and so there should be no surprise when our communities are actually physically attacked.

SY: On a personal level – as an immigrant from one of the Muslim-majority country on the travel ban list – did you ever imagine seeing something like this transpire in the United States?

AS: We’ve seen this happen before. We saw the internment of Japanese-Americans in relatively recent history. We’ve seen the murder of black individuals by the police. We’ve seen the crackdown against indigenous communities that are claiming their right to their natural resources. We have seen evidence of this trend of repression coming. Most disturbing was a comment by an adviser to Trump after the elections, saying something to the effect that internment of Japanese-Americans was okay given the circumstances. I don’t ever remember hearing anybody legitimize that in recent history. So, I think we should really look back closely at the history of this country and the repression that has happened and learn from the resistance that has been able to fight back. And so not be surprised, but be prepared to fight back.

Azadeh Shahshahani is the legal and advocacy director at Project South. She joined FSRN by phone from Atlanta, Georgia.