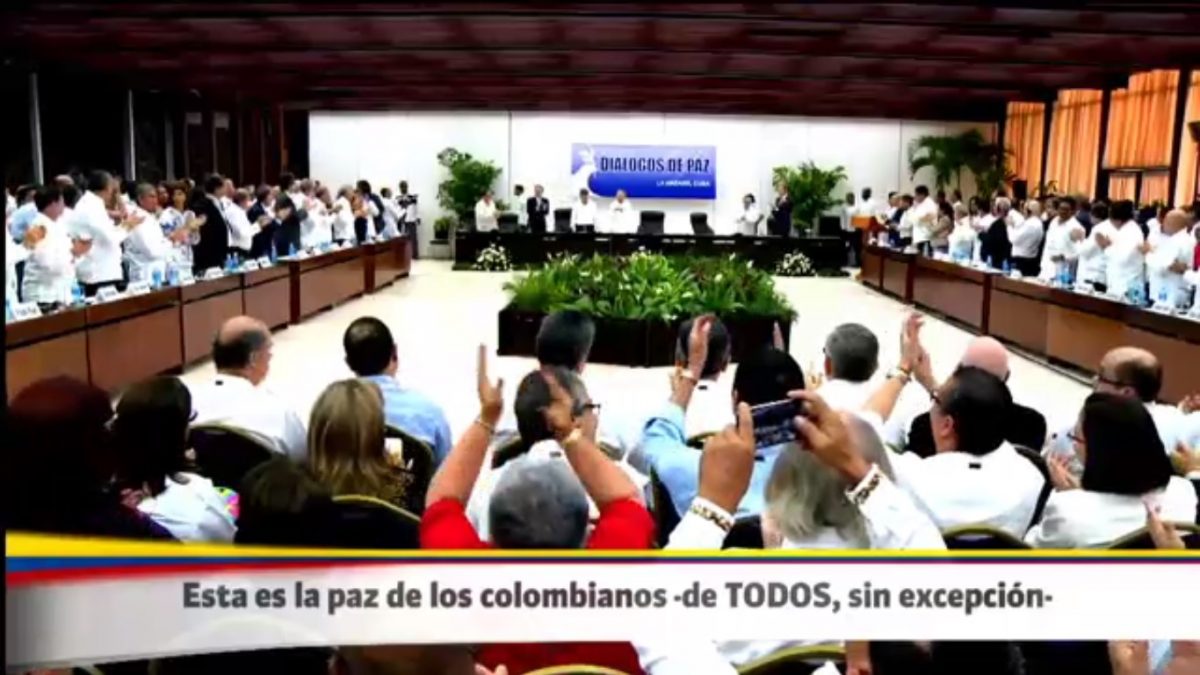 Colombia's government and FARC rebels signed a bilateral ceasefire in Havana, Cuba in a ceremony attended by regional heads of state. (Screenshot of live feed via es.presidencia.gov.co)

Heads of state and high-ranking officials from across Latin America gathered in Havana, Cuba today to witness a historic moment; the signing of a bilateral ceasefire between the government of Colombia and the FARC rebels. The ceasefire is being celebrated as an end to the longest-running civil conflict in the Western Hemisphere. Robert Packard has more.

Raucous applause filled a meeting hall in Havana as lead negotiators from the Colombian government and the FARC guerrilla army signed a bilateral ceasefire agreement. After more than three-and-a-half years of peace talks, the deal contains multiple points and conditions that – if satisfactorily met – will lay the groundwork to end the country’s 51-year-old armed conflict.

“This is not a capitulation of the insurgency, as some stubborn opponents would like to see it, but rather the outcome of a serious dialogue between two forces that confronted each other for more than a half century, each without being to beat the other,” FARC leader Timoleón Jiménez – known by his nom de guerre as “Timochenko” – told signing ceremony attendees. “Neither the FARC nor the state are defeated forces thus what has been agreed to cannot be interpreted by anyone as the product of an imposition of one party upon the other. We’ve been in discussions for a long time, and even arrived at what seemed like dead ends, but we were able to work through them thanks to the fair-minded and effective intervention by mediating countries – Cuba and Norway – and well-timed and wise suggestions of creative spokespersons on both sides or of their astute advisors.”

As part of the cessation of hostiles pact, the hemisphere’s oldest guerrilla army has agreed to a UN-monitored disarmament timeline while the government has vowed to create a program to help demobilized FARC members re-enter civilian society. Both sides say there are more details to hammer out before they can draft and sign a final deal to end the conflict, but that they expect to have a working agreement by next month.

Colombians will be able to vote on whether to accept or reject the final peace deal in a nationwide referendum.