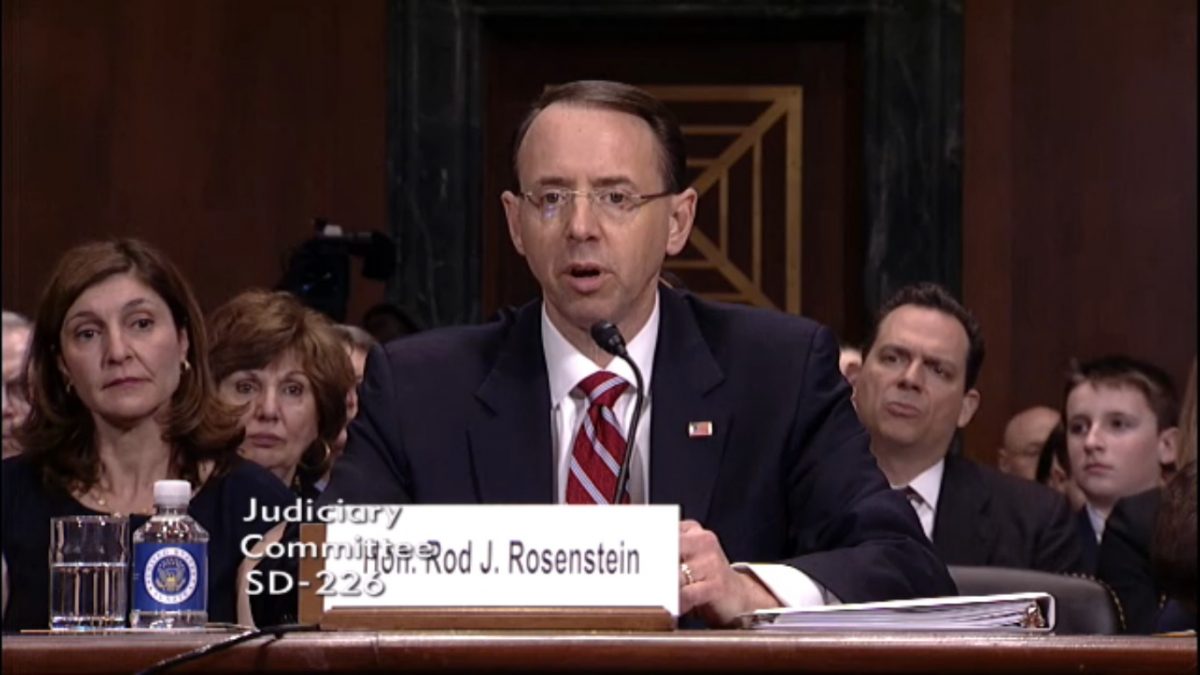 The Senate Judiciary Committee continued the confirmation process for high level posts in the U.S. Department of Justice Tuesday, with a joint hearing for Deputy Attorney General and Associate Attorney General nominee. The hearings come amid calls for an independent investigation into Russian interference in the U.S. presidential election, and into apparently false statements made under oath by Attorney General Jeff Sessions during his confirmation hearings. FSRN’s Reaux Packard has more.

If confirmed, Maryland U.S. Attorney Rod Rosenstein would be responsible for leading any investigations into Russian interference in the presidential elections, after Attorney General Jeff Sessions recused himself last week.

Senator Diane Feinstein quickly voiced concern about Justice Department actions already taken under the Trump Administration, including the about face on the Texas Voter ID case and guidance for schools regarding how best to provide equal access to facilities for transgender students.

But what the California Democratic Ranking Member of the Senate Judiciary Committee, and Chair of the Senate Intelligence Committee, seemed most interested to know was if Rosenstein was prepared to appoint a special counsel to probe allegations that Russia manipulated the recent electoral process to swing the outcome in Trump’s favor.

“Now, given the recusal by the Attorney General and the intense political interest in this matter and the strong potential that the investigation will, in fact, involve individuals that are associated with the White House, it would seem that this situation also rises to the level of extraordinary circumstances, that warrant a special council under the regulations. Given all of this, and the heightened level of distrust on all sides, do you support the appointment of an independent special counsel to look into these matters?” Feinstein asked.

“Senator, my understanding of this, and again, it’s been based solely on media accounts at this point, my understanding is that at least one of your colleagues called for a special counsel for something related to this matter while Attorney General Lynch was in office in early January, and she rejected the requested. Based on the media accounts, I believe she said exactly what I said, that she had confidence in the career professionals in the department. But she had an additional piece of information; she presumably knows the facts, and I didn’t. And she rejected that request,” replied Rosenstein. “Currently, senator, we have an acting Attorney General for this matter, Dana Boente, he was appointed U.S. Attorney by President Obama and if there were need for special council, he currently has full authority to appoint one, so I don’t know, if at this point, if Attorney General Lynch or Acting Deputy Attorney General Boente are right or wrong, but I certainly wouldn’t be in a position to overrule them without having access to the facts that are the basis for their decisions.”

“So, I’m trying to figure out what your bottom line is. I interpret that as a ‘no.’ Is that fair?” Feinstein followed up.

“Well, I don’t know, senator,” Rosenstein answered. “The answer is I’m simply not in a position to answer the question because I don’t know the information that they know – the folks who are in a position to make that decision – and when I am in that position, I don’t presume Attorney General Lynch and Acting Deputy Attorney General Boente are correct. I have a lot of respect for them, but if I determine that they’re mistaken, then I would overrule them.”

“Thank you,” said Feinstein. “ I understand.”

Attorney General Sessions recused himself from any campaign related probes after revelations that he held two meetings with a Russian envoy while serving as a campaign surrogate for then-candidate Donald Trump.

During his confirmation hearings, then-Senator Sessions denied any such meetings, though later claimed that he misspoke.

The Deputy Attorney General oversees the daily operations of the Justice Department, including the Solicitor General’s office and the office of Legal Counsel, as well as law enforcement agencies like the FBI, the DEA and the AFT. Rosenstein is a three-decade civil servant who has served under both Republican and Democratic administrations.

The Bush appointee recently garnered headlines in Baltimore when he announced corruption charges against seven police officers on charges of racketeering, including extortion and robbery.

Rachel Brand also took questions from the committee. Brand is the nominee for Associate Attorney General, and if appointed would be in charge of civil litigation at the DOJ, overseeing the Civil Rights Division, the Environmental and Natural Resources Division and the Office on Violence Against Women.

The Senate Judiciary committee is widely expected to advance both nominees.