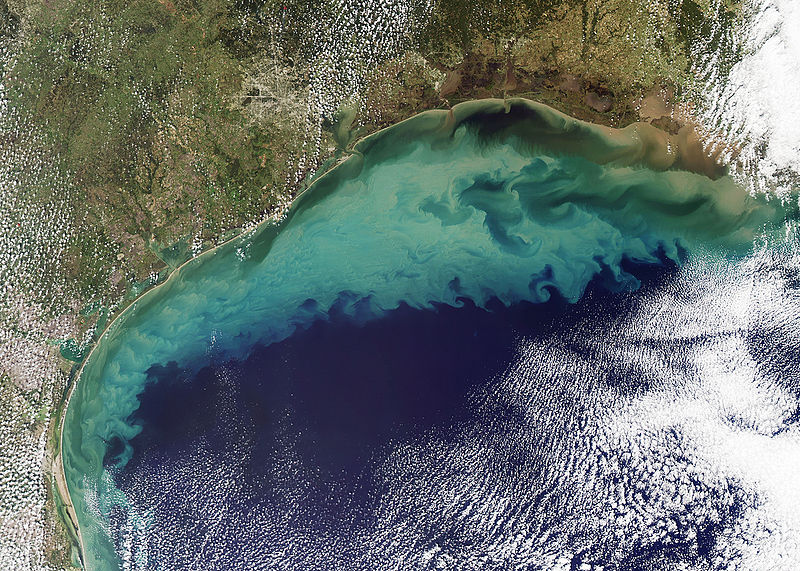 Scientists are estimating that there will once again be a large “dead zone” in the northern Gulf of Mexico this summer. Dr. Nancy Rabalais, executive director of Louisiana University’s Marine Consortium, is co-author of a new paper estimating the size of this area of low oxygen. FSRN’s Seán Kinane spoke with her and found out that the hypoxic zone that is ultimately caused by pollution from runoff from states bordering the Mississippi River could be about the size of Connecticut this summer.

Seán Kinane: What’s the northern Gulf of Mexico “dead zone” and how is it formed?

Nancy Rabalais: The area of, primarily, Louisiana, but also Mississippi and Texas, is an area that is devoid of oxygen in the lower water column near the seabed in the summertime. It’s due to the Mississippi River; basically, the fresh water creates a two layer system, and the nutrients that come from the rivers stimulate the growth of small phytoplankton, which are generally good for the system, but if there’s too many they fall to the bottom, and the decay depletes the oxygen in the bottom waters.

SK: And what happens to the marine life in this hypoxic zone?

NR: Normal, dissolved oxygen is around five to six in the summertime, and it gets down to two or below two, to one or sometimes zero. And, at about two, most of the things that can swim out of the area will try to leave the areas. Sharks and rays will go at three. And then the remaining organisms, if the low oxygen stays and is really low, then the animals that live in the sediments will die off.

SK: Can you just paint a picture for our listeners of what the area on the bottom there might look like before there’s a dead zone there and compare that with what it might look like afterwards?

NR: The seabed in the northern Gulf of Mexico is pretty uniform, doesn’t have a lot of structure to it; there’s no rocks, it’s just a mud bottom. We have oxygenators on an offshore oil platform that we maintain, and so we know the oxygen levels at all times. So we do a lot of diving and when you’re in the surface waters, you see lots of fish, you can usually see some sort of plankton bloom. And as you go down through the water you will see fish, and then when the oxygen starts to change to below two, you don’t see any fish anymore. And you swim down to the bottom and most of the time it’s usually pretty dark and it’s hard to see anything, but you definitely don’t see any fish. And if you swim out over the seabed then you may see some dead organisms laying on the surface.

SK: And you’re predicting the size of the hypoxic zone – or the dead zone – this summer. What are your predictions?

NR: We are predicting that it’s going to cover about 6,800 square miles. And that could be higher or lower, depending on whether we have a storm or anything. That’s about three times higher than the hypoxia test for a scale of 200 square miles.

SK: And how does that compare to previous years?

NR: It’s called average this year, because it’s within the range of the last five years. But average is not acceptable when you have a huge area that does not have enough oxygen in the bottom.

SK: There is a hypoxia action plan. What is it and can you tell us if it’s being met?

NR: A hypoxia action plan was approved in 2001, and reviewed and re-approved in 2008. And the goal was still 5,000 square miles with a 5 year running average by the year 2015. And you can see we’re not in 2015 anymore, we’re in 2016, and the hypoxia task force changed the time to reach those limits in 2014 and extended it 25 more years. So, with an intermediate goal of reducing the nutrients in the river by 20 percent, how effective the task force has been, it’s been mostly in education issues for the states that produce most of the nutrients. Working with the USDA and conservation services and just to teach the farmers better nutrient management. But until it changes on the whole scale, it’s not going to make much of a difference.

SK: And one of the reasons that plan isn’t being met is because the nitrate loading that’s in the water coming out of the Mississippi, that’s not going down. Isn’t it going up and why would that be?

NR: It’s about level right now. It’s gone up three times since the 1950s. We can’t ever expect to get back to the 1950s, but we figure with about a 30 to 40 percent reduction, we can get back to that would meet the 2,000 square mile high. The high nitrate levels are a concern in the Midwest as well because of drinking water standards. And cities like Des Moines and Columbus have to put on tertiary treatment. They have lakes and reservoirs that have harmful algae blooms because of too much nitrate. So it’s not just a Gulf of Mexico issue, it’s a whole watershed issue.

Dr. Nancy Rabalais is the executive director of Louisiana University’s Marine Consortium. She joined FSRN by phone from Louisiana.