Questions linger a year after the murder of Honduran indigenous leader, Berta Cáceres 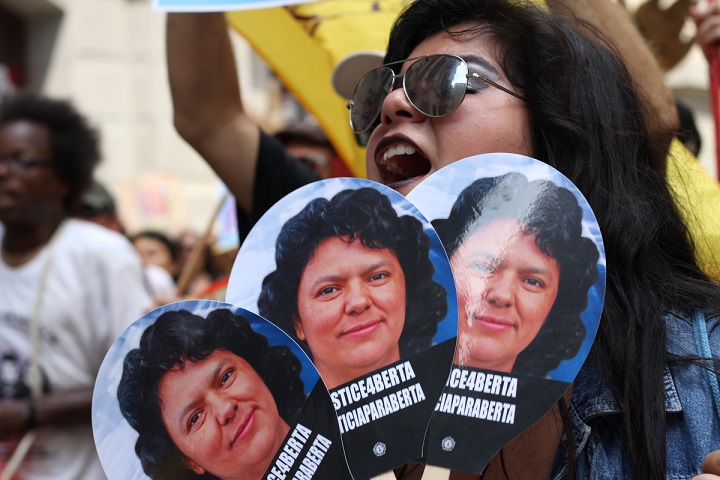 Activists demand justice for Berta Cáceres, an indigenous activist who was murdered in Honduras and criticized Hillary Clinton's support for the country's coup in 2009 when she was Secretary of State. (Photo Credit: Andalusia Knoll)

Thursday marks the first anniversary of the murder of the prominent environmentalist and indigenous rights activist Berta Cáceres in Honduras. The crime sparked international condemnation and a reconsideration of U.S. military aid to the country. While the investigation into Cáceres’ murder is ongoing, many believe the motive was linked to her high-profile activism and leadership of COPINH, the Civic Council of Popular and Indigenous Organizations of Honduras.

Shannon Young: First, let’s start with the status of the investigation into your aunt’s murder. What has been uncovered thus far, and what does your family think about the official investigation?

Silvio Carillo: What’s happened thus far is that it’s been a completely bungled investigation by the Honduran authorities. As soon as it happened, they went into the house, they destroyed evidence, they stomped all over the house. There were people who were unknown to us and to them that were in the house. And then they held the main witness, they didn’t let him clean up; he had blood all over his clothing. They held him, questioned him, for about 36 to 48 hours and didn’t give him any legal representation. And then there were rumors that they started – that the police themselves started – talking to the media and saying that this was a crime of passion, and then later on that it was a robbery attempt, and then a myriad of things to create this confusion that, really, I mean, we all know the truth and this was – we now know that some of the people arrested belong to and worked for DESA, the company that was building the dam. And the links go higher up, because some of these men were also in the army and part of Honduran intelligence in the army that were trained by the U.S. This is never ending story, but it’s clearly not an appropriate – Honduran authorities are not the appropriate people to be conducting this kind of authority, especially in a country with a 95 percent impunity rate, which means only five percent of the crimes get solved. In such a high profile murder, how is this government, in reality, going to solve this crime? They don’t have the capability or wherewithal to do so, considering they may be linked.

SY: The military men who have been arrested as part of the case, the information about their backgrounds and U.S. training, has that been more of an investigation by the family or has it been communicated by the government?

SC: The government has not been communicating with us. My grandmother – the poor woman has to stand by the radio every day and listen for news of the murder. What’s happened is some of this information been leaked, conveniently leaked. And through pro-government media outlets, and then we know some of these people that have worked there, there have been run ins with them from before, that my aunt has had, threats from them, from some of them, so she’s familiar with these and has lodged complaints against a few of these men. These guys are familiar to us, we knew their background already, a lot of this is not new for us except for the random people, the other gentlemen that they arrested. We still don’t believe that these are the criminal masterminds, the people that paid for this murder, although the U.S. Embassy here in Honduras is saying it is. There’s no way that’s true, because these links clearly go way up higher, into the army and into army intelligence, which would lead you to the government itself.

SY: Global Witness describes Honduras as the deadliest country in the world for land defenders. What factors drive this and who specifically are the victims?

SC: This is going on around the world. Unfortunately, Honduras has become a focal point for it because, with the help of the U.S., Honduras has “opened up for business.” The oligarchy here, the business interests, which are aligned with the national party and the current government, and the government since the coup in 2009 that the U.S. supported has simply just said, alright, we’re going to bring in all this money and we’re just going to take all these lands and we’re going to create mines and dams and energy projects that really aren’t necessary or even that efficient for Honduras in this time and place. There are many other ways to invest in these lands or invest in electricity and power for Honduras, but they chose to do this because it’s basically a get-rich-quick scheme for the establishment. The victims are the rest of us, who are these poor people who don’t have land, who aren’t educated, they don’t have water, and the price is the life of leaders in places like Honduras where we don’t have leaders to look up to. Little boys and girls in Honduras have no heroes here; they just assassinated one. That’s what the U.S. should be doing, is helping to foster more and more heroes, like this woman who has created a movement, and clearly it had an impact worldwide.

SY: As you mention, the violence targeting land defenders in Honduras has been parallel to a rise in U.S. military aid to the country’s government and to outright presence of U.S. military personnel. The former head of U.S. Southern Command – the military office that oversees Pentagon operations in Latin America and the Caribbean – is now the Secretary of Homeland Security. Do you see a risk of certain aspects of the militarized war on drugs coming to the U.S.?

SC: Absolutely. I mean, I think it’s already been happening previous to this. We see militarized police forces in small towns all over the U.S. and they’re cracking down on protesters, and it’s really scary to be talking about this in a place – you know, you kind of expect it here in Honduras, but not in the U.S. and, lo and behold, it’s starting to happen in the U.S., and very frequently. Last year was a horrible year for these kinds of incidents and it’s, I expect, with this current administration, with this heightened fear mongering, I think it will continue, of course. I think the current administration almost seems to take pleasure in creating chaos, and sadly I think the police and the military are obviously going to be getting a big boost in financing.

SY: Silvio Carrillo, anything else you’d like to add?

SC: I wanted to add that my aunt Bertita, Tia Tita as I called her, was this very large presence, this woman that you had to listen to when she spoke. But also, Berta was a mother, she was a mother to four children, she was a daughter, she was an aunt, and she was like a sister to me. We were only two years apart. She’s not just this figure that is now gone, she was a human being – should could have been anybody’s aunt, she could have been anybody’s daughter or sister. But she was just fighting for survival and trying to help do what’s right. It’s not just about politics or whatever, it’s about what it is to be human.

Silvo Carrillo is a freelance journalist and filmmaker who lives in Oakland, California. He joined us by phone from the family hometown of La Esperanza, Honduras.