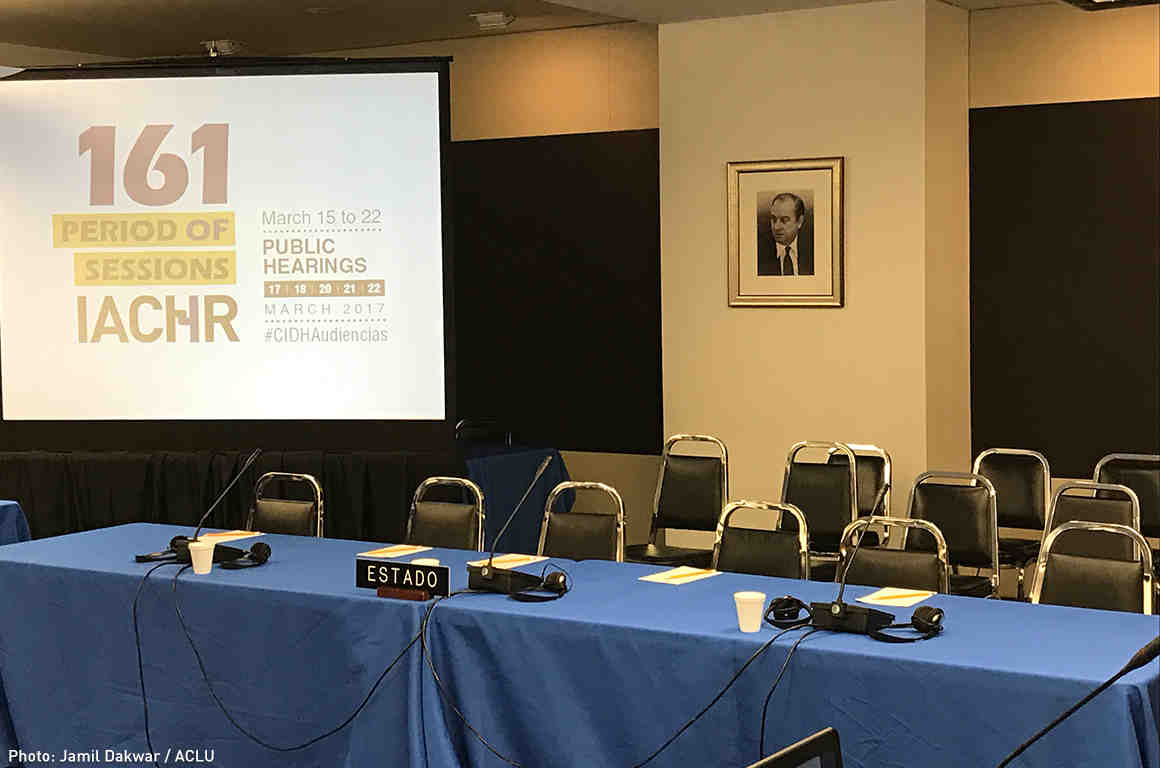 The table reserved for the U.S. delegation sat empty at the IACHR hearing. (Photo credit Jamil Dakwar/ACLU, used with permission)

U.S. government policies and practices on immigration, indigenous rights and the treatment of asylum seekers were the subject of hearings today at the Inter-American Commission on Human Rights, a body of the Organization of American States. But, for the first time in organization’s history, the U.S. government didn’t even send an official representative to the hearings. Shannon Young has more.

Hearings at the Inter-American Commission on Human Rights Tuesday included topics like ramped-up restrictions on admissions of asylum seekers at the southern border, advancement of the Dakota Access Pipeline despite indigenous opposition and President Donald Trump’s travel ban and executive orders on immigration. But the U.S. defense team was not only silent – it was absent.

In a departure from past protocol, the U.S. government did not send a single delegate to represent its positions before the hemispheric human rights accountability body. The American Civil Liberties Union called the absence ‘an unprecedented no-show’ and warned it ‘sets a dangerous precedent that mirrors the behavior of authoritarian regimes and will only serve to embolden them.’

In the past, U.S. snubs of IACHR hearings involved sending low-level officials – but showing up nonetheless.

Immigration policies – particularly regarding asylum seekers – took up the bulk of Tuesday’s session.

“The right to refuge is being undermined worldwide and the United States is no different,” says Nicole Ramos, an attorney with El Otro Lado, based in the Mexican border city of Tijuana. “Over the course of the last 15 months, I have escorted 68 asylum seekers to the San Ysidro Port of Entry, which borders Tijuana, where I have personally witnessed CBP officers, CBP supervisors, and private security guards contracted by the U.S. government attempt to turn away asylum seekers seeking refuge and denying them access to the credible fear interview process.”

Ramos describes what immigration advocates are calling ‘turnbacks.’ Others who gave testimony in the hearing say it’s part of a trend to shut down ways of legally seeking asylum or refuge at U.S. ports of entry. After ‘turnbacks’ at the border, desperate people may attempt to enter the U.S. illegally, which can trigger detention, and even criminal charges.

Theodora Simon of the Hope Border Institute explains: “Systematic, prolonged detention is to become express policy. More aggressive prosecution of unauthorized entry, for example, a trend we’re already witnessing on the border, will criminalize and incarcerate a greater number of asylum seekers in a direct violation of the Refugee Convention and other international norms.”

“Prolonged detention, coupled with harassment, abuse and family separation, forces asylum seekers to withdraw their claims and be deported, despite legitimate claims to protection,” Simon explains. “As one detainee put it, ‘They treat us like animals. I try to stay strong and keep my head up, but this place breaks you down.'”

Under standard protocol for these hearing, U.S. government representatives would have a chance to explain official rationale behind policy decisions and practices. But the empty chairs at the U.S. table made their own silent statement.

The U.S. State Department later cited ongoing litigation as a reason for not attending the open session.

Commissioner Margarette May Macaulay, the IACHR’s special rapporteur on migration seemed both sympathetic and at a loss for a plan of action.

“The problem is so huge. What, exactly, do you think we can do immediately, as a commission? And which would be effective?” asks Macaulay. “Because the Commission can use its mechanisms and so on and do all sorts of things if you press releases, we can make our recommendations to the state, that’s the federal state, and by and large that may be the end of the matter.”

Attorney Jamil Dakwar, Director of the ACLU’s Human Rights Program, pointed out that a case on indefinite detention is now pending before the U.S. Supreme Court. He suggested that commissioners feeling stonewalled could turn to diplomacy.

“It’s important for the Commission to be able to engage directly with some of the state authorities that are willing to engage on some of those issues,” Dakwar says. “Even if the federal government, executive branch, is absent or doesn’t want to participate, it doesn’t mean that the Commission cannot find other ways to engage, with the help of civil society, including in situations where you can actually engage other third countries that have international obligations vis à vis the United States.”