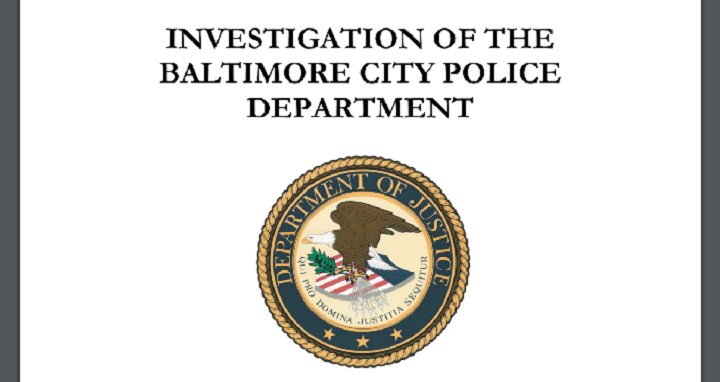 The Department of Justice has released a report on its civil rights investigation of the Baltimore Police Department – finding officers routinely engage in unconstitutional and illegal practices, most often against people of color. FSRN’s Nell Abram has more.

Detailing what people in Baltimore have long known, the U.S. Department of Justice released a scathing 163-page report, saying policing patterns in the city are unconstitutional and violate federal anti-discrimination law.

During a 15-month span, DOJ investigators conducted a broad probe engaging both law enforcement and Baltimore residents. At a joint press conference Wednesday the head of the Department’s Civil Rights Division, Vanita Gupta, summarized the findings.

“BPD engages in a pattern or practice of making unconstitutional stops, searches and arrests,” Gupta explained. “Using enforcement strategies that produce severe and unjustified disparities in the rates of stops, searches, and arrests of African Americans, using excessive force, and retaliating against people engaging in constitutionally protected expression.”

Police Commissioner Kevin Davis said upon reading the report, he immediately fired a number of officers.

“I am very, very concerned by some of the information contained in this detailed report,” Davis said. “I have no tolerance for anyone who is privileged enough to wear this uniform if they choose to engage in racist, sexist, discriminatory or biased-based policing.”

But according to the findings, longstanding complaints about the BPD’s inherently biased Zero Tolerance policing – which is not dissimilar to New York’s broken-windows model – went without department response. In fact, the DoJ found that the department failed to even collect data to see if there was basis for the claims.

“We are revamping our approach to officer accountability – including the way that the use of force by officers is reviewed and how officers are disciplined,” Rawlings-Blake said.

The Mayor expects the annual cost of compliance to reach between $5 and 10 million.

The report comes just two weeks after the city’s state’s attorney, unable to secure a conviction against three of the officers involved in killing Freddie Gray, dropped all remaining charges.

When asked how the DOJ findings relate to police accountability in those cases, Mayor Rawlings-Blake said: “One has nothing to do with the other.”

The report establishes an outline from which the city and the federal Justice Department will craft a legally binding agreement for reform known as a Consent Decree.

“When we get to an agreement, it will be a court enforceable agreement which helps sustain the commitment to change regardless of who’s in any of our positions and will be independently monitored by a monitoring team and I think that just helps build in and ensure sustainable reform over the long haul,” Gupta said.

Gupta says that each police department the DOJ has investigated has unique challenges. In Ferguson, Missouri issues centered on aggressively citing residents with petty violations and even serious crimes to raise city revenue.

“Our hope is that with all the resources that the Justice Department puts out, including through findings reports and consent decrees, that these are resources that major city police departments, small and mid-size, can actually learn from and do self-evaluation,” said Gupta.