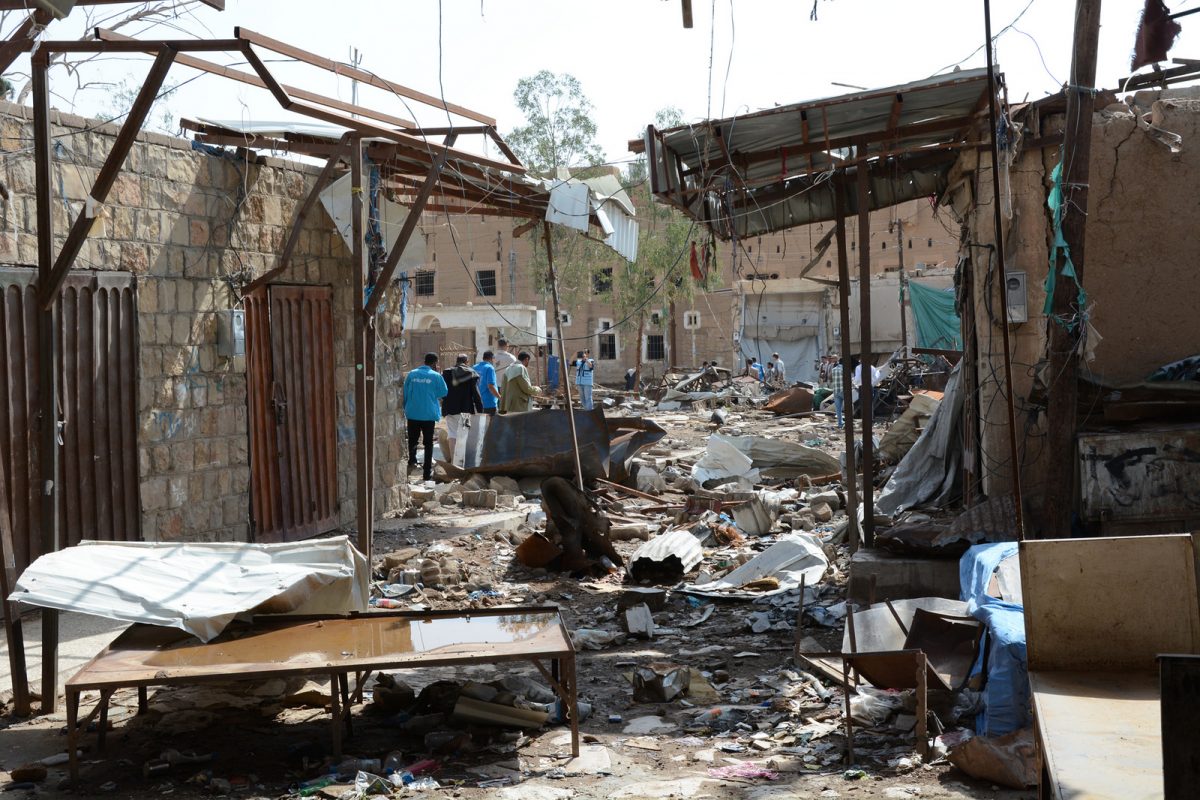 Destruction in the Yemeni city of Saana after airstrikes in March and April, 2015. (Photo credit: United Nations OCHA via Flickr / Creative Commons)

Human rights groups are reacting with alarm to a proposed $1.15 billion dollar transfer of U.S. battle tanks and other weapons to Saudi Arabia – a day after the Gulf country resumed bombing Yemen’s capital city. FSRN’s Jacob Resneck has more.

“It’s a factory producing children’s foods and cookies. The airstrikes killed 15 male and female workers and injured 8 others,” Almrah said. “Other employees now have no jobs, no source of income. There was no ammunition or weapons in the plant, nothing. It’s just a civilian factory run by a Yemeni businessman.”

The Saudi-led airstrikes resumed the same day the U.S. State Department announced it was green lighting a $1.15 billion arms transfer to Riyadh.

Included in the package is at least 130 M1A1/A2 Abrams battle tanks and more than 400 heavy machines guns. The Saudi-led military coalition has killed more than 6,000 people in Yemen, many of them children – mostly through airstrikes but also in ground operations as it seeks to prop up Yemen’s government-in-exile.

The renewed airstrikes led reporters in Washington to quiz State Department spokeswoman Elizabeth Trudeau about the cause-and-effect of transferring more heavy weaponry to the Saudis.

“Is the State Department concerned that U.S. weapons that have been sent to Saudi Arabia will take part in the killing of civilians?” a reporter asked Trudeau.

“So, what I would say is we regularly talk to our partners and our allies around the world. Civilian causalities are obviously of grave concern to us,” she responded.

Congress has 30 days from Monday to block the deal. Already Sens. Chris Murphy of Connecticut and Rand Paul of Kentucky – a Democrat and Republican respectively – have vowed to oppose the transfer. But the political clout of General Dynamics, the deal’s main benefactor, makes Capitol Hill approval almost certain.

And rights groups are concerned.

She says the U.S. role in the Saudi-led campaign in Yemen is much bigger than many realize: “The U.S. not only is providing intelligence support to the Saudi-led coalition it’s also providing refueling of their jets. So because of all this and because of things that are within the public record, we do know that the U.S. in fact is itself a party to the conflict in Yemen which means that it itself has an obligation to investigate any unlawful strikes in which it may have been involved. And there has not been nearly enough transparency to the U.S. people or writ large about what the U.S. is doing in Yemen and what the U.S. is in fact doing in Yemen to ensure that protection of civilians is paramount and ensured doing ongoing fighting.”

If approved, this latest weapons transfer to the Saudis would be the second deal valued more than a billion dollars since November. And it’s part of a larger pattern of massive U.S. arms exports around the world. The Defense Security Cooperation Agency reports that weapons deals facilitated by the Pentagon topped $47 billion during the past fiscal year making the U.S. far and away the largest arms dealer in the world.