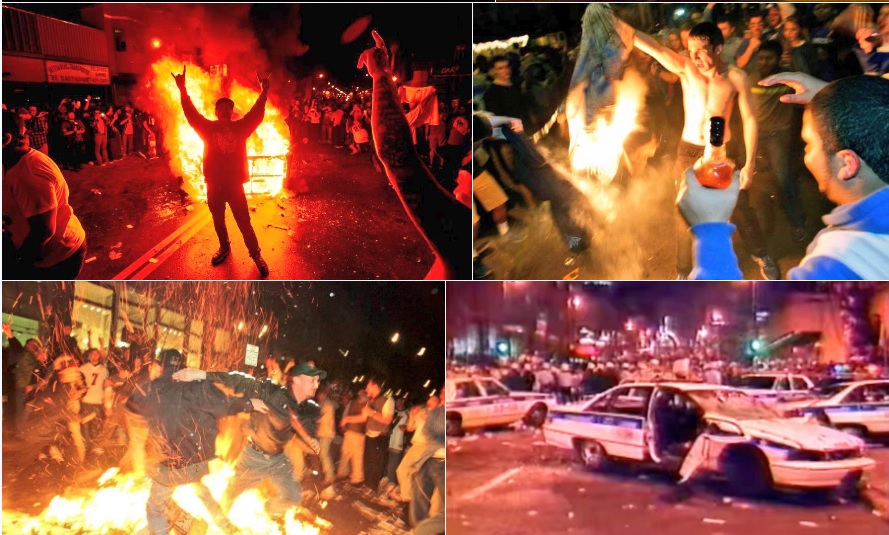 Milwaukee is imposing a 10 p.m. curfew for teenagers in an effort to quell a third night of rioting. An uprising sparked in the city after police killed a 23-year-old black man. The northern neighborhoods of the city were rocked with shops looted, arson and at least one person shot and injured. The Wisconsin National Guard has been activated but not deployed. FSRN’s Jacob Resneck has more.

Milwaukee’s northside erupted overnight Saturday in an apparently spontaneous rage following the killing of resident Sylville K. Smith, who police say was armed with a handgun when he was fatally shot.

Confusion and chaos reigned as gunfire broke out and in the early hours.

Milwaukee police said the officer is a 24-year-old African-American whose name has not been identified is on paid leave and left the city for his own safety.

As neighborhood businesses burned in the Sherman Park neighborhood, Sedan Smith, who said he was the slain man’s younger brother, told a Milwaukee TV station the violence was a reaction to oppressive law enforcement.

Milwaukee Mayor Tom Barrett held a news conference Sunday, saying he’d seen a still from the officer’s bodycam that clearly showed that Sylville Smith was armed and facing the officer when he was shot by police.

He says the loss of life was tragic for the family and Sherman Park community: “But what I want our residents and anyone who is watching this to understand that what that police officer encountered was an individual running who had a gun in his hand.”

Khalif Rainey, Sherman Park’s elected city councilor, said the circumstances of the shooting aren’t as important as the unaddressed realities of racial tension and inequality that have existed in the city for years.

“What has happened tonight may not have been right, I am not justifying that. But no one can deny the fact that there’s problems, racial problems here in Milwaukee, Wisconsin, that have to be closely, not examined, but rectified,” Rainey said. “Rectify this immediately. Because if you don’t, this vision of downtown and all that – you’re one day away… you’re one day away.”

Milwaukee police said Monday that 14 people were arrested and 4 officers injured. The police chief said officers exercised restraint and pointedly did not use any force despite the unrest. Wisconsin Governor Scott Walker sent National Guard troops to Milwaukee, but the city says they will not be deployed to the streets unless requested by the police chief.

Mayor Tom Barrett said Monday the city is imposing a 10 p.m. curfew for teenagers and hinted it could be extended.

Parents, after 10 o’clock your teenagers better be home or in a place where they’re off the streets,” Barrett said. “We’ve been in conversations with the city attorney’s office in case we need to do more than that for a more widespread curfew.”

In the meantime, both the state governor and city mayor are calling for the Wisconsin Department of Justice to release police body camera footage of the shooting as long as it doesn’t impede the investigation.

Residents in communities from Milwaukee’s Sherman Park and across the nation are also awaiting answers as tensions remain high between law enforcement agencies and many communities they are sworn to protect.