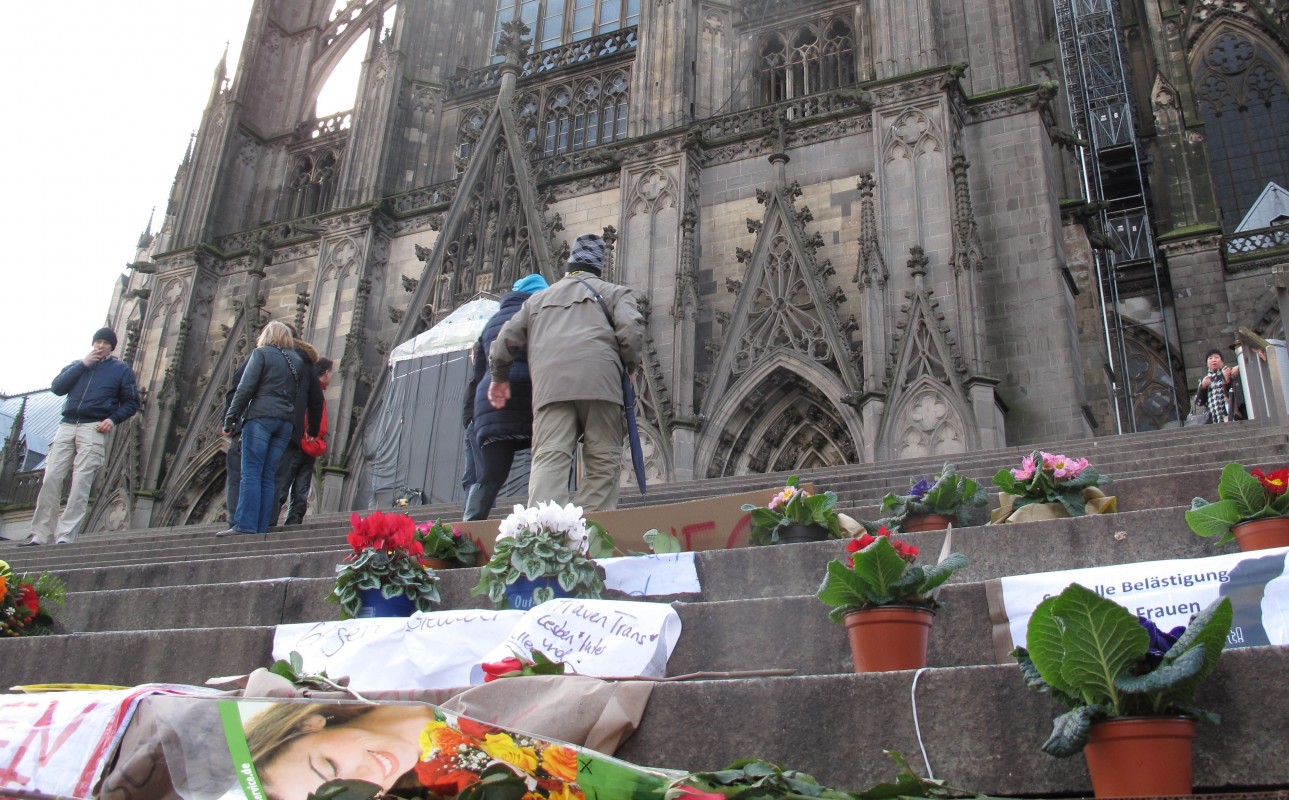 Flowers left for the victims of New Year's Eve sexual violence on the steps of Cologne's cathedral just steps away from the central railway station. (Credit: Jacob Resneck)

Germany is cracking down on asylum seekers two weeks after hundreds of women complained of being harassed, groped and sexually assaulted outside Cologne’s main train station during a chaotic New Year’s Eve in which police apparently lost control of the city’s main square.

Ever since, far-right groups like PEGIDA, which campaigns against Muslim immigration in Europe, have held demonstrations across Germany. Last weekend, Cologne was against the scene of chaos as PEGIDA sympathizers clashed with police and counter-demonstrators from anti-fascist groups. FSRN’s Jacob Resneck reports from Germany.

Download Audio
The city’s central train station lies in the shadow of the city’s Gothic cathedral. It was here on New Year’s Eve where thousands of people – mostly young men and many of them migrants and asylum seekers – took over the square shooting bottle rockets, roman candles and fire crackers in a chaotic atmosphere that quickly spiraled out of control.

By many accounts pickpocket gangs groped and harassed young women, stealing their valuables and leaving many scarred and humiliated. More than 600 complaints were filed in the first days of 2016, the lion’s share here in Cologne.

This has caused a scandal in Germany. The police chief was sacked. And right-wing politicians – long hostile to the German government’s welcoming about 1.1 million refugees in 2015 alone – are seizing on the New Year’s Eve chaos to push for a cap on new arrivals.

“We’re coming to the point where we say it would be okay if nobody came anymore,” said bookstore owner Dierk Stoetzel whose shop is around the corner from the train station. “We’re fine with the people who are here and they should have the right to stay here. It’s going to be a problem if another million coming this year.”

This is a common feeling and shows that the attitude toward refugees in Germany is changing. War and chaos in the Middle East seems to be getting worse, not better. Refugees in Germany say they can feel the mood shift.

“I’ve noticed a big difference,” said 28-year-old Syrian refugee Ahmad Alian, a lawyer from the city of Raqqa. “When I’m on the train, people sometimes stare at me for two or three minutes in a very bad way. It’s really hard when people glare – it’s shocking really.”

It’s not his imagination. The country’s anxiety makes room for right-wing forces long hostile to immigrants to seize the initiative and xenophobes are getting bolder with Muslim community organizations like the German Council of Muslims reporting an unprecedented rise in hate mail including threats.

Police acknowledge the treat is real. Last Sunday there were four separate attacks against Middle Easterners and an African outside Cologne’s train station.

“We will do everything we can to clearly show the limits to potential criminals, and those who think they can take the law into their own hands,” senior police official Michael Temme told reporters following reports of the attacks on refugees.

Authorities have also charged 32 men accused of harassing and robbing women on New Year’s Eve. Of those, 22 were asylum seekers. Police are even offering cash rewards in excess of 10,000 euros ($10,860) for information leading to more arrests.

Germany’s politicians continue to express their outrage about the attacks against women. But feminists say they’re wary of becoming a foil for anti-refugee sentiment.

“Cases of sexual assault are not a new or imported phenomenon. They’ve existed and they’ve been something that the feminist movement has been dealing with for years,” said Mackenzie Nelson of the Heinrich Boell Stiftung North America, a US non-profit affiliated with Germany’s Green Party. “On the one hand we should not say that this kind of misogyny can be justified or tolerated or dismissed – these are very real allegations and they need to be taken seriously.”

But she notes that feminists inside and outside of Germany are alarmed that right-wing movements are using the outcry over sexual violence as cover to demonize refugees and Muslims as a whole.

“This attention has been hijacked by right-wingers in Germany,” Nelson told FSRN. “The PEGIDA movement has instrumentalized feminist arguments to push their anti-refugee and xenophobic agenda and this is also something that we can’t tolerate.”

Meanwhile, the German government is vowing to pass laws making it easier to deport refugees convicted of serious crimes, including sexual assault.

Refugees like Ahmad Alian, whose hometown is now the de facto capital of ISIS, says most refugees fled to Germany seeking a peaceful existence, not to stir up trouble. In his case, he’s working on construction sites and helping support two younger brothers and a nephew who are still in middle school.

“Syrian people fled war, from a lawless country, where anyone can commit crimes,” Alian told FSRN. “Why would you come to Germany to commit crime? Syrian people came here to build a new life in this country.”

The problem is not going away. The International Organization for Migration reported this week that more than 24,000 migrants and refugees crossed the Mediterranean to Greece and Italy in the first two weeks of January. That’s on top of the more than a million who arrived in 2015.

Many European countries are reacting by tightening their borders and reinstating passport controls.

Yet peace initiatives for the conflicts in Syria, Yemen and Afghanistan remain stalled. That means the enormous influx of people fleeing war, poverty and turmoil will continue as hundreds of thousands continue to seek the relative safety and security in Europe.