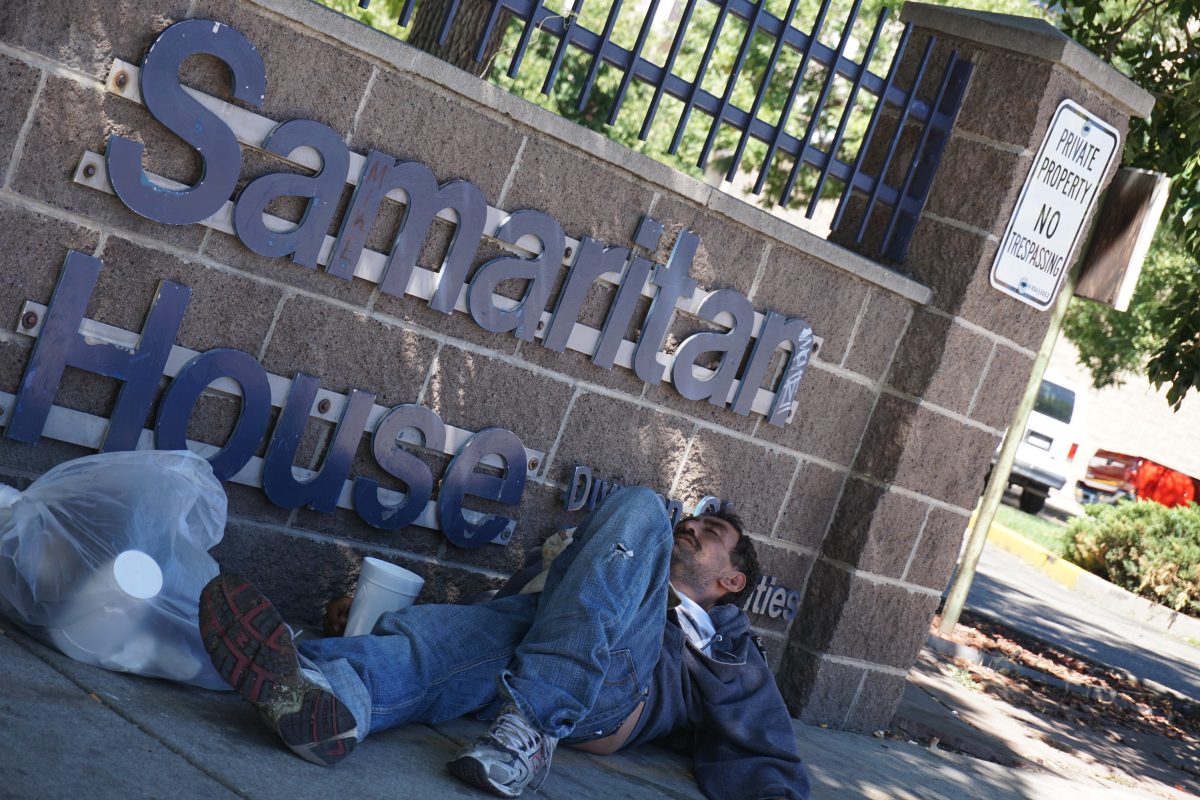 Homeless individuals and advocates in Denver have filed a lawsuit against the city after a dramatic increase in homeless “sweeps” that the suit claims violate constitutional rights. New reports from organizations like the National Coalition for the Homeless show that cities like Washington DC, Dallas, Saint Louis, Seattle, San Francisco and Los Angeles are also trying to deter homelessness by criminalizing it. The Denver lawsuit is getting national attention as a potentially precedent setting example of how the homeless can assert their rights. Hannah Leigh Myers reports.

During a so-called “sweep” city workers forcibly clear and clean a public area where the homeless congregate. They’re told to move along and any items deemed abandoned are relocated for pick-up or destroyed.

“They are taking people’s belongings and literally putting them in trash bags and trash cans,” said a homeless person in an excerpt of a video taken during the first major sweep in Denver in early March of 2016.

Since then, police data shows an uptick in enforcement of the city’s urban camping ban by as much as 500 percent. The video was posted by Denver Homeless Outloud, the advocacy group behind a recently filed lawsuit which argues the city is violating the constitutional rights of its homeless population with a series of municipal ordinances.

“Unfortunately Denver, which in a lot of ways is a progressive city, has led the cutting edge of treating people as expendable units with these homeless sweeps,” says Attorney Jason Flores-Williams, who represents the homeless plaintiffs in this class action, civil rights lawsuit. “Denver has decided to inflict this severe mass constitutional deprivation on the people that we need to be protecting and serving the most.”

The lawsuit specifically claims that an aggressively enforced city-wide urban camping ban systematically violates the Fourth Amendment’s protections against unreasonable search and seizure, the Eighth Amendment defense against cruel and unusual punishment right and Fourteenth Amendment rights to due process and equal treatment under the law.

“Possession is nine-tenths of the law. Those are people’s possessions. So what legal reign do you have to say ‘those are no longer your possessions. Even though those are your possessions, I’m going to take them and throw them away?’” asks twenty-six-year-old Porsche Buttom, who has been homeless in Denver for the last year.

Shelters are constantly full and by some reports only meeting 10 percent of the city’s need.

The city has defended the sweeps and enforcement of the urban camping ban citing health and safety concerns. It claims citations and fines are rare.

Thus far city officials have shied away from making specific statements about the lawsuit, but are instead highlighting new efforts and increased spending on homeless aid programs.

“Today the city invests nearly $50 million to address homelessness each year and we’ve been able to help thousands of people stabilize their lives,” said Denver Mayor Michael Hancock in his State of the City address in July. “We will bring a coordinated and comprehensive approach to the policies, programs along the full homeless-to-housing spectrum. We will knock down silos, refocus our city agencies and create a unified and forceful effort to help those who need a home find a home. This is some of the hardest work we do and we can do better.”

Denver officials have taken numerous steps to address the crisis, acknowledging that the city’s lack of affordable housing is a key part of the problem and creating a new city department dedicated to reducing homelessness. But Eric Tarz, a senior attorney at the National Law Center of Homelessness and Poverty, says coupling aid programs with policies that criminalize homelessness wastes money.

“As UC Denver reported last year, in Denver itself enforcement of these laws cost both the public and homeless individuals much more than simply providing housing would cost. It was estimated that three-fourths of a million dollars just for one year of enforcement of several ordinances in Denver and that’s not including the cost of the lawsuit Denver has just brought upon itself,” Tarz explains. “We know that this is a prevalent problem. This is a costly problem but the solution is providing adequate housing. But the communities that actually have solved it, places like Utah where we’re seen a 90 percent drop in chronic homelessness by providing housing and their finding time and again that it costs less.”

But while Denver officials try to come up with answers, the city’s homeless struggle to meet their basic human needs, like sleep. This homeless woman, who didn’t give her name when addressing a crowd at a Right to Rest protest on the steps of the Colorado capitol building earlier this year, said Denver’s harsh enforcement policies are pushing the homeless to their physical limits.

“I have to get up every time a cop comes by and take my blanket from underneath me and make sure I’m not covered up. It is really cold. And I don’t want to be here and if I could get a job I would but I am so tired. I just want to sleep,” the unnamed homeless woman told the crowd. “That all I want to do and I can’t sleep no matter where I go. Deborah said earlier that’s it torture and it is! I can’t even think straight because I haven’t slept. No one thinks straight when they go hours without sleeping, days, and I can understand why some of these people turn to drugs just to keep them up. I don’t know what this is about but the Right to Rest sounds right to me.”

Soon after the rally, state lawmakers voted against a Right to Rest Bill.

The class action civil rights lawsuit against Denver is trying to force the city, the state of Colorado and the nation to acknowledge that the homeless have constitutional rights.

In recent years the departments of Justice, Education and Housing and Urban Development have all taken action openly opposing policies like sweeps that criminalize homelessness and, in conjunction with suggestions from the White House, continue to provide best-practice guidance.

With urban populations on the rise and the socioeconomic gap widening, cities and voters are having to chose where to focus their efforts to address increased levels of homelessness: to provide support, to criminalize – or both.

For now municipalities are watching the court’s reactions to lawsuits like the one filed in Denver to determine which paths they can and should take.