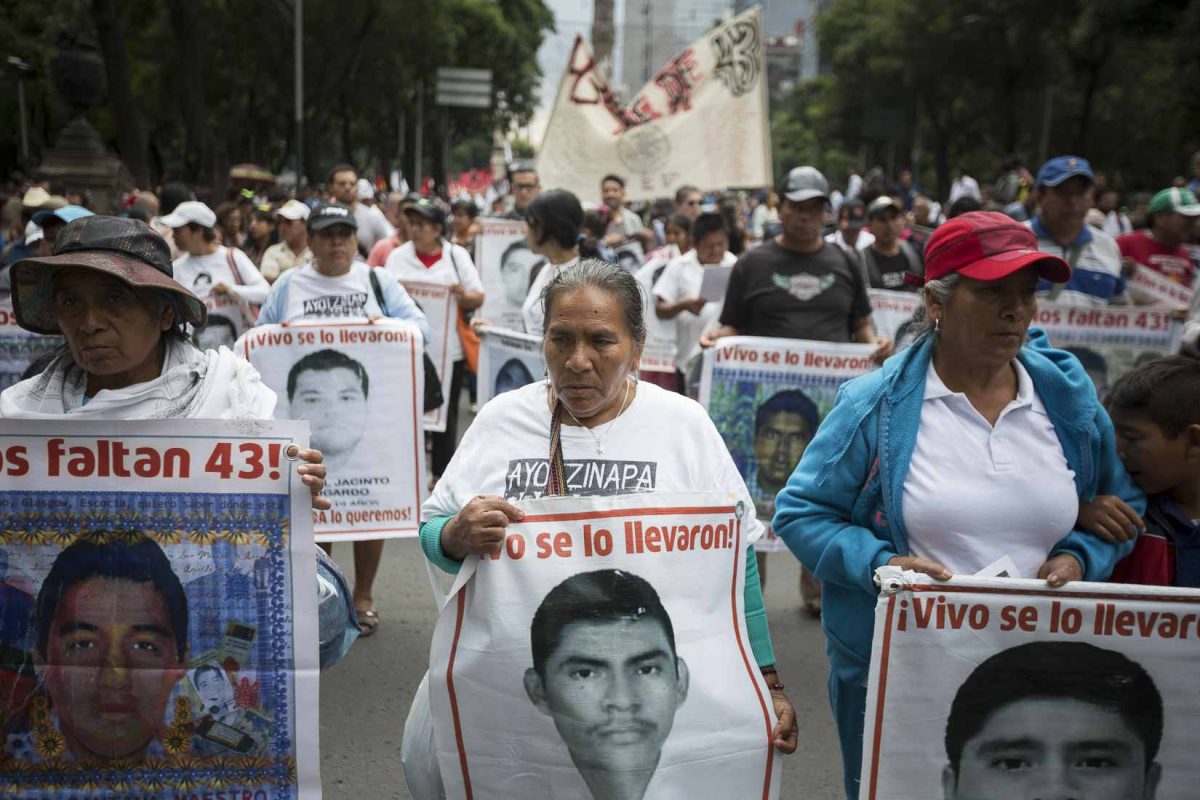 In Mexico thousands took to the streets throughout the country Monday to mark the second anniversary of the forced disappearance of  43 Ayotzinapa teacher training students. The case  brought sharp national and international criticisms to Mexico’s handling of human rights abuses, and its commitments to transparency and combating impunity. Clayton Conn has more from Mexico City.

The demand for justice in the Ayotzinapa case continues to echo loudly throughout many cities and towns in Mexico. For Berta Nava, mother of one of the Ayotzinapa students confirmed killed on September 26th, 2014, the stalled government investigation has deepened her frustration and anger. However, she says it does not affect the parents’ overall resolve to find the other missing 43 students.

“We do not get tired President Peña Nieto, you fool, you idiot! You better understand that,” Nava exclaimed. “Because as you see us marching, shouting ‘They were taken away alive, we want them back alive’ that is how you will see us searching for them, at all costs.”

Although Mexican authorities have arrested 130 individuals, including municipal police and presumed organized crime members accused of participating in the mass kidnapping, not one has been charged with forced disappearance nor has a single sentence been handed down. Yet in a statement  Monday, Mexico’s president Enrique Peña Nieto reiterated his confidence in the official investigation.

“Today is an occasion to reaffirm the strong commitment of the government of the republic to reach its ultimate consequences in the investigation that is ongoing and has had the participation of international organizations, especially the Inter-American Commission on Human Rights,” Nieto said. “Mexico opened the doors for the commission to get involved, to know the case, to contribute to the work that corresponds to the authority responsible in carrying out the investigation, which is the office of the attorney general of the Republic.”

However, in April of this year the Mexican government refused to extend the mandate of the Inter-American Commission’s team of specialists investigating the case. The panel of rights experts publicly decried that the government delayed or denied them pertinent information and resources. Analyst and investigative reporter, Jose Reveles, argues that the Mexican authorities sought to undermine the commission’s work.

“For the government, it turned out to be a bad calculation, like many of its others,” Reveles explains. “It thought that this was going to be like ‘honey on bread’ and it turned out that the panel’s work was very critical, because they worked seriously, they did their job well and because they discovered many holes and deviations in the preliminary investigation.”

Mexico’s relationship with the Inter-American Commission on Human Rights has changed in another fundamental way in the wake of the Ayotzinapa case. In May of this year, the Commission announced that it was in a severe financial crisis, due to the failure of member nations to provide sufficient funds for basic operations. Before 2014, Mexico was the third highest donor, contributing on average $200,000 annually. However in 2015 and most of 2016, Mexico failed to provide any funds to the commission’s operational budget.

“I would just state the obvious: there is a tension, there is even a conflict of interest, I think, in the fact that the commission has a mandate to supervise whether the authorities, whether the state, respects and guarantees human rights,” says Maria Isabel Rivero, a spokesperson for the IACHR.

This potential conflict of interest may be compounded even further, beyond the Ayotzinapa case. Last year, 73 percent of all the more than 1,000 complaints received by the commission from its members states came from Mexico.

Reveles underscores that this contrasts sharply with the image the country seeks to project internationally: “Mexico is famous for being, as the saying goes, ‘light in the street, darkness at home.’ Internationally, Mexico is always careful about its image, always, on any topic you can think of whether that be human rights, ecology, the country always seeks to be within international parameters or even to be more advanced than many other nations.”

Earlier this month, Mexico finally agreed to provide $150,000 to the Inter-American Commission on Human Rights, which has implemented a two person team to indefinitely monitor the advances in the Ayotzinapa case. But it’s a big step down from the level of investigation the specialists were carrying out independently and the official investigation seems to be on hold, despite continued cries for justice.