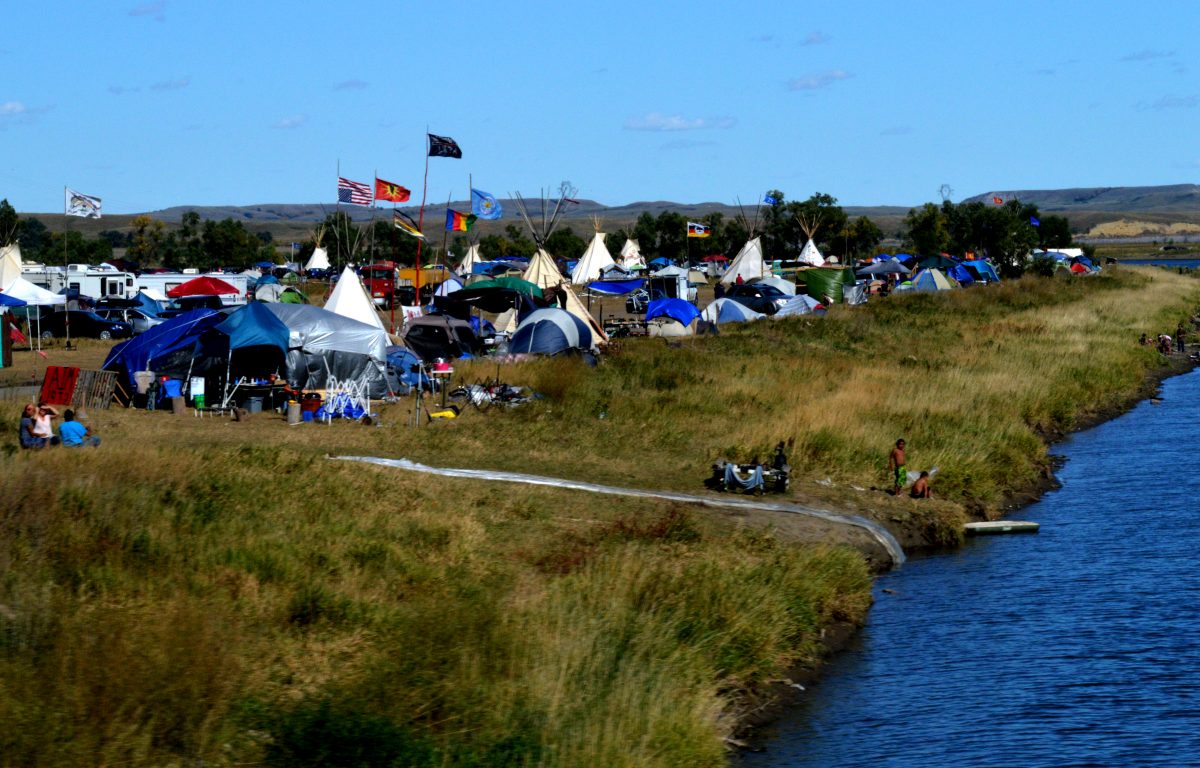 Along the Cannonball River at the northern section of Oceti Sakowin camp, just north of the boundary of the Standing Rock reservation. (Photo credit: Chris Geovanis)

This weekend, water protectors will begin their seventh month of occupation near the North Dakota banks of the Missouri River, a watershed for almost 20 million people and thousands of miles of land that opponents say is threatened by the pipeline and its potential for leaks. Wednesday, police arrested 21 people, re-escalating their targeting of people organizing to stop the Dakota Access pipeline, whose opponents have staged the largest multi-tribal mobilization of Native Americans in generations. Chris Geovanis reports.

Thousands of Native Americans – like Thomas Joseph – and their allies have come from across the Americas to the windswept plains near the Standing Rock Reservation – and they vow to tough it out through the region’s notorious winter months until the pipeline project is cancelled.

“If this pipeline goes through, it’s gonna damage our land and our water. Nothing can live in oil,” says Winona Gasteau of the Cheyenne River Sioux. She oversees the kitchens for the largest encampment of pipeline opponents at Standing Rock. This day, she taught children how to butcher a buffalo. “We’re only human and we have to work together to save our future generations.”

The response to the growing call for solidarity from people like Gasteau has exploded in the last six months, with multiple camps and literally thousands of people gathering near Standing Rock on any given day to oppose the pipeline construction route.

The Standing Rock Sioux and their allies accuse Energy Transfer Partners – the company building the pipeline – of desecrating sacred cultural sites and running roughshod over their rights – charges the company adamantly denies.

Opponents also argue that the pipeline – which the Brookings Institute says will create less than 50 permanent jobs – perpetuates fossil fuel exploitation and puts at risk a watershed that almost 20 million people rely on for clean water. The 1,100 mile pipeline would cross rivers, forests and farmland in four states, carrying roughly twenty million gallons of fracked Bakken crude oil each day – much more safely than by road or rail, according to the company.

But the disastrous Shelby County Alabama spill earlier this month has sparked growing public alarm about the safety of pipelines. And Standing Rock water protectors note that a major Dakota Access partner, Enbridge, logged more than 800 spills between 1999 and 2010 alone – including the largest inland oil spill in U.S. history.

“This is gonna affect everyone down the Missouri River, not only natives, but I mean black, white, yellow, green, purple, whoever, you know? We all drink water, damn it,” says Jasmine Hardin, a member of the Ho-Chunk Nation who came from Winnebago, Nebraska with her aunts and uncle, one of hundreds of family encampments making up the larger mobilization against the Dakota Access pipeline. “This is gonna be the ultimate change in America. And it’s gonna happen whether they like it or not.”

While lawyers for pipeline opponents continue to battle the company and the government in court – and the number of arrests near Standing Rock may soon top 100 – on the ground, thousands of people like Joseph, Gasteau and Hardin remain committed to waiting out – and pushing out – the pipeline, despite the company’s political clout and the coming winter cold.