U.S. and Russia again face off on Syria on heels of reported chlorine gas attack 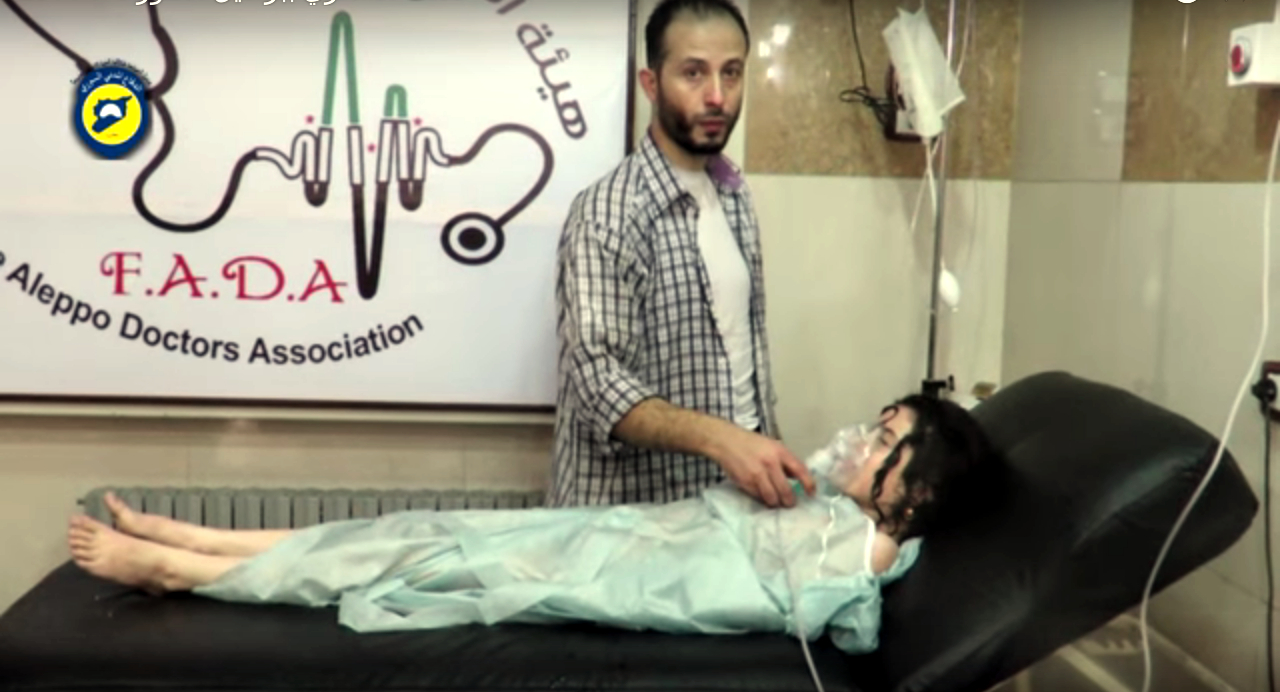 Screenshot of a video distributed by Syria's White Helmets showing the aftermath of an alleged chlorine gas attack on Sept. 6, 2016.

The U.S. and Russia are once again facing off over Syria’s Civil War. This, on the heels of what appears to be another alleged chemical attack by regime forces targeting civilians – this time in eastern Aleppo. FSRN’s Robert Packard has more.

After months of relatively fruitless Syrian ceasefire talks brokered by the United Nations, the U.S. and Russian officials are at another diplomatic crossroads.

Russia is reportedly stalling on the implementation of a ceasefire plan put forth weeks ago. Meanwhile, the humanitarian situation in the besieged city of Aleppo worsens.

A video published Tuesday by frontline volunteer rescue workers known as the White Helmets, shows doctors at an Aleppo hospital treating alleged victims of a chlorine gas attack. The chlorine was reportedly contained within three barrel bombs – a type of bomb favored by the regime of Bashar al Assad. Multiple children appear in the video, breathing through oxygen masks.

As the violence rages in Syria, various talks on how to end it are taking place outside the war torn country.

In the UK, the High Negotiations Committee of the Syrian Opposition, or HNC, met Wednesday to lay out a framework for a political transition in Syria.

Joined by foreign ministers from around the world – they proffered a six-month plan, at the end of which Syrian President Bashar al Assad would step down. The proposal then calls for Syria’s political and armed opposition factions to form an 18-month interim government that would rule until democratic elections can be held.

While the HNC proposal is the most specific crafted yet, it has little hope of realization. The plan begins with a ceasefire, and HNC negotiators say they won’t accept any proposal that emerges from US-Russia talks if it deviates from their vision for a future Syria.

At a Wednesday press briefing, U.S. State Department Deputy Spokesperson Mark C. Tone said Secretary of State John Kerry had spoken by phone with his Russian counterpart earlier in the day, but had no travel plans to announce related to Syria talks.

“I can say that the Secretary remains committed to continuing efforts to try and resolve the remaining, or outstanding, issues in order to reach an arrangement on Syria that will put in place a durable ceasefire, cessation of hostilities, provide humanitarian access to all areas and lead to a resumption of talks between parties in Geneva,” added Tone. “We hope to get there, but we won’t agree to an arrangement – as we’ve said before – that does not meet our core objectives.”

As talks continue to play out in parallel between opposition interests and global powers, the death toll in Syria climbs daily. Bombs reportedly targeted a market in eastern Aleppo Wednesday,

The Syrian American Medical Society, which operates healthcare facilities throughout Syria, says at least two people were killed and as many as 150 people were injured – in Tuesday’s chlorine-laced bombing in the same area. The group says the gas attack was the 167th use of chemical weapons within Syria since the start of the civil war five years ago.