Protesters shut down all tar sands oil pipelines coming into the U.S. 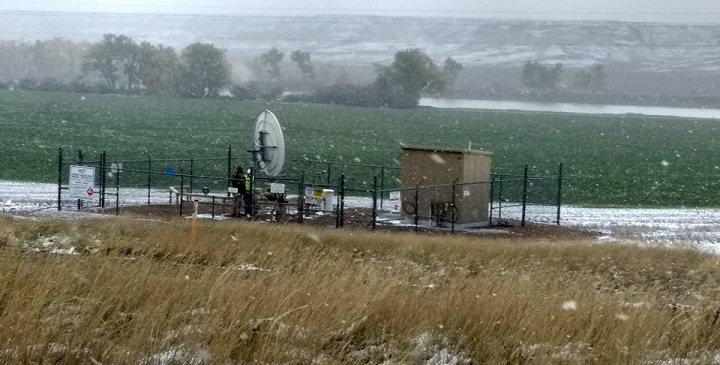 Leonard Higgins, one of five activists who shutdown all pipelines that transport tar sands oil into the U.S. as part of #ShutItDownToday, shut off Spectra Energy’s Express pipeline in Coal Banks Landing, MT.

Early Tuesday near the northern U.S. border with Canada, protesters shut down all five pipelines through which tar sands oil flows into the country; nine people were arrested. The actions came just two days after a federal appeals court denied another bid from the Standing Rock Sioux to block construction on the Dakota Access pipeline. FSRN’s Nell Abram has more.

Using bolt cutters, Ward removed the lock and chain from an orange valve wheel at Kinder-Morgan’s Trans-Mountain pipeline, turned the valve to shut off the flow, locked it shut with a new chain and padlock  and left a bouquet of bright yellow sunflowers, all while recording his actions with a body worn camera.

Ward is one of five parents and grandparents who shut down five pipelines across four northern states early Tuesday.

“We are acting in response to the call to action from Standing Rock, for escalated response and prayers and actions and this is in solidarity to them,” says Afrin Sopariwala with Climate Direct Action, the group that organized the coordinated shutdowns.

But even more than supporting indigenous water defenders fighting the Dakota Access pipeline, the shut downs are also meant to draw attention to what Climate Direct Action calls the inadequacy of global response to the climate crisis. Last week, the European Union approved the ratification of the Paris Agreement, reaching the 55 nation threshold required to implement the international climate deal.

Sopariwala says it’s insufficient: “We feel that even though 192 countries signed an agreement to cap climate increase to 1.5 degrees from the baseline, there isn’t a single plan that has been put forth by any government or climate organization that comes close to matching this target.”

The group is calling for President Barack Obama to invoke the National Emergencies Act to keep the tar sands pipelines from restarting, begin federal closure of all domestic coal and tar sands oil extraction and introduce a concrete, financed plan to reach the global 1.5 degree goal.

Just before locking down to a piece of heavy machinery, in a video posted by Unicorn Riot one of two Standing Rock allies taking the direct action explained why: “It’s my responsibility to take on violence, and take on the head of that violence, the head of that state oppression, so that folks of this land do not have to further suffer ongoing genocide that continues to happen.”

Protests near the Sacred Stone and Red Warrior camps spiked again after a three-judge panel for the D.C. Circuit Court of Appeals released a ruling late Sunday night, turning down a Standing Rock Sioux request for an injunction to extend a halt on construction inside a 20-mile radius of Lake Oahe.

Once again, the Justice, Interior and Army Departments responded almost immediately after the ruling came down, issuing another joint statement reiterating the call for Energy Transfer Partners to voluntarily continue the pause. But in a Tuesday statement, the Dallas-based company behind the four-state, nearly $4 billion crude oil pipeline said they “look forward” to quickly restarting construction on the highly contested portion of the project.