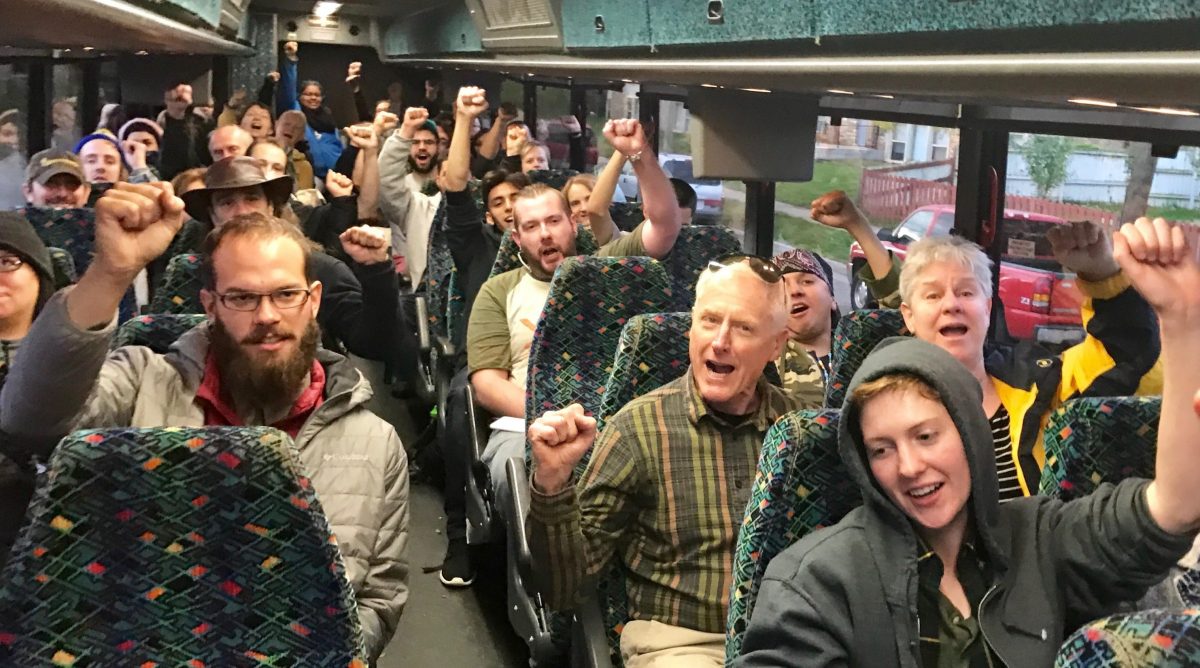 Tension grew near the Standing Rock Sioux reservation again Wednesday as indigenous opponents of the Dakota Access pipeline project faced off with riot gear-clad law enforcement. Tribe members were trying to cross the Cannonball River to reach sacred territory located on what water protectors say is Army Corps land; they were reportedly met by rubber bullets and pepper spray.

The renewed use of force came one day after President Barack Obama said the Army Corps of Engineers is reviewing possible alternative routes for the pipeline and call for law enforcement to exercise restraint.

Meanwhile, protests continue to grow around the country. In New York, solidarity events were held in two major banks and in Grand Central Station. And a busload of supporters boarded a coach this morning in Minnesota. Jared Goyette was there.

On a brisk fall morning, a small crowd began to gather by a community center in South Minneapolis before the break of dawn. They were waiting for a bus to take them about eight hours west, to the Standing Rock reservation, where they plan to join the growing movement against the Dakota Access Pipeline.

The trip, put together by anti-climate change group MN350, came in the wake of protests about a decision by the local Hennepin County Sheriff’s department to send deputies to assist North Dakota officers facing off against the “water protectors,” as those who oppose the pipeline call themselves. Hennepin County was one of three local jurisdictions to dispatch officers to North Dakota.

“It grew from about 400 on the first day, and then three days later had grown to at least a thousand and that’s a pretty rapid escalation in people’s outrage. So that, I think, has been as much as anything, to propel this trip to take place,” says Stan Stattinglet with MN350. The deputies have since returned from North Dakota, but the local movement in support of Standing Rock shows no signs of slowing down.

“I was at both of the rallies last week and I saw the ground swell of a movement – there were people of all nationalities, creeds, colors. It doesn’t matter where people are from or what they believe, they all understand that people are having their rights usurped and they are being damaged, in violation of their constitutional rights,” Stattinglet says. “That’s why I’m going.”

The bus and two vans with about 65 people all together left Minneapolis around 8:30 a.m. They were packed with donations, including warm clothes, sleeping bags and tents for those planning to stay at the reservation through the cold weeks and months ahead.