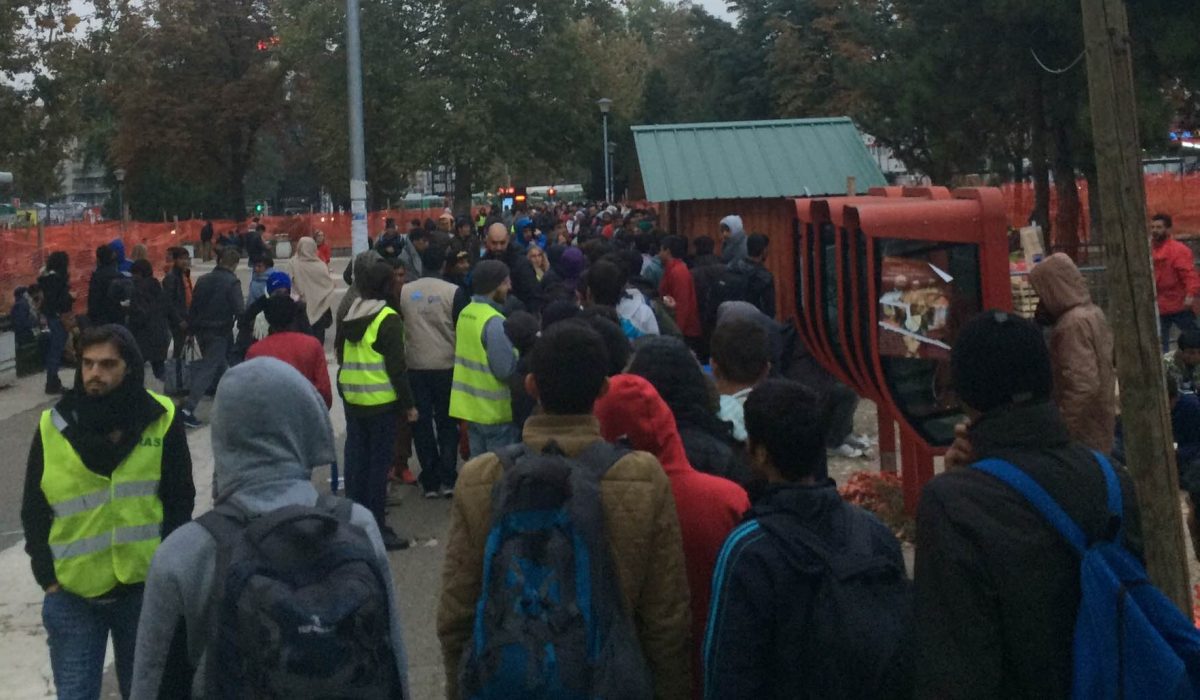 Despite the closure and militarization of many of Europe’s borders, hundreds of refugees continue to enter using transnational smuggling networks in the Balkans. Reporter Andrew Connelly has more from the Serbian capital Belgrade.

In a muddy stretch of land in the Serbian capital, colloquially termed Afghan Park, smugglers and potential clients rub shoulders and illicit journeys to northern Europe are bought and sold. The lucrative black market transactions occur, appropriately, in the shadow of Belgrade University’s economics department.

Hungary, to Serbia’s north, allows in only a handful of refugees per day through its border, and almost exclusively families, which means single men are left adrift in Belgrade seeking an escape route. Saboor is one of these men. Until recently, he was a crane operator for the NATO-led mission in Afghanistan, recovering U.S. military vehicles blown up by the Taliban.

“I put my truck there, the helicopter comes, they drop bombs. When they clear, I pick it up,” Saboor says.

Like many Afghans who worked with western forces, he became a target for the Taliban and with no legal avenue to gain a visa, he contracted smugglers to take him to Europe.

“Where do you meet them? How do you find them?” FSRN asks.

“How much does it cost to get to Italy?” asks FSRN.

Saboor keeps getting caught in Hungary and returned to Serbia. But after the treacherous journey he took through Pakistan, Iran and Turkey to get this far, he’s not giving up. Even when Saboor arrived in Europe, his ordeal did not end. He rolls up his shirt sleeve, exposing an arm bent crooked.

“My arm, broken in Bulgaria, police hit me,” Saboor says.

Cafes near Afghan Park have morphed into smuggling saloons, where the traders of souls smoke, drink brandy and arrange journey itineraries with huddled refugee families. The UNHCR estimates 200 refugees arrive in Serbia each day, and that approximately 6,300 are currently stranded across the small country. The smugglers don’t like to talk with journalists, but based on the average price quoted for a journey like Saboor’s, they could be making up to more than $360,000 per day, or $11 million per month, just for Serbia. Motassam and Mohammad, both from Pakistan, say families back home liquidate their assets to pay for these expensive, risk-filled journeys.

“They sell their properties,” says Mohammad.

“For a good future,” adds Motassem. “For example, smugglers tell him, ‘Europe? Oh , man you go to Europe you make big property, a little property you sell and triple property you make there. One hour you do a job, maybe 20 euro or 50 euro.’ And everybody [responds] ‘Ah, yes, good.’”

Back in their homeland, some migrants fall prey to the dreams of Europe sold by smugglers and some refugees who go broke in Serbia end up working in the smuggling trade. At Miksaliste, a nearby shelter for refugee families, volunteer co-ordinator Albert Grain confirms how the industry sucks in the destitute.

“Well over half the people we have in every day are unaccompanied minors. A lot of the people can’t afford to go on, so they work for a couple of months instead of paying for their next bit of travel,” Grain points out. “It’s a very common way to do it.”

But this poses a huge threat as the smugglers ensnare refugees in their other, far more dangerous, side businesses.

“So they [unaccompanied minors] are testifying that they didn’t have the money, but they agreed with the smugglers that they will somehow pay when they reach the destination countries. Which is an indicator for our organization and field workers that it could be a debt bondage and that they could be in much more trouble when they reach their destination countries,” explains Jelena Hrnjak, who works for Atina, a Belgrade-based NGO combatting trafficking and gender-based violence. “Also, they testified that, because they didn’t have the money, they were forced, for example, boys, 14- and 15-years-old, they were forced to strip. The smugglers were forcing to get them to get naked, taking pictures and sending them on the internet, this was how they were to asking for money from their parents, and they were molesting them. And also what we see is that their position and how unprotected they were put them in this position and made then unable to speak about it.”

Afghan children play cricket in the Krnjaca asylum center, though in reality almost nobody seeks asylum in Serbia, a country of low wages and high unemployment. Out in Belgrade’s suburbs, Krnjaca is a row of gloomy barracks which once housed Serbian refugees who fled other parts of the Balkans during the bloody regional conflicts in the 1990s. Amrullah was an English teacher in the restive Afghan province of Kunduz. After being tricked by a smuggler who dumped him Serbia instead of Italy, he is broke and trying to resist the temptation to join the gangs.

“Some of my relatives, my family members, they told me much more than a hundred times to start smuggling [people] here,” says Amrullah.

Amrullah’s friend Abdul-Sami explains that for educated Afghans like them, options are limited, and fifteen years since the west intervened militarily, nothing seems to have changed.

“Our government is fighting with Taliban, but inside the government there are a lot of people who are coming with exactly the same ideology,” Abdul-Sami points out. “How you can live with these kind of people?”

“Tahreeb,” the Arabic word for smuggling, is even on the lips of Syrian children who play on rusting swings in Krnjaca, as they sing about how they managed to escape their ruined homeland. With legal pathways to reach the west limited, Europe’s refugee crisis did not end with the closing of the borders, it just became less visible, and possibly even more dangerous.