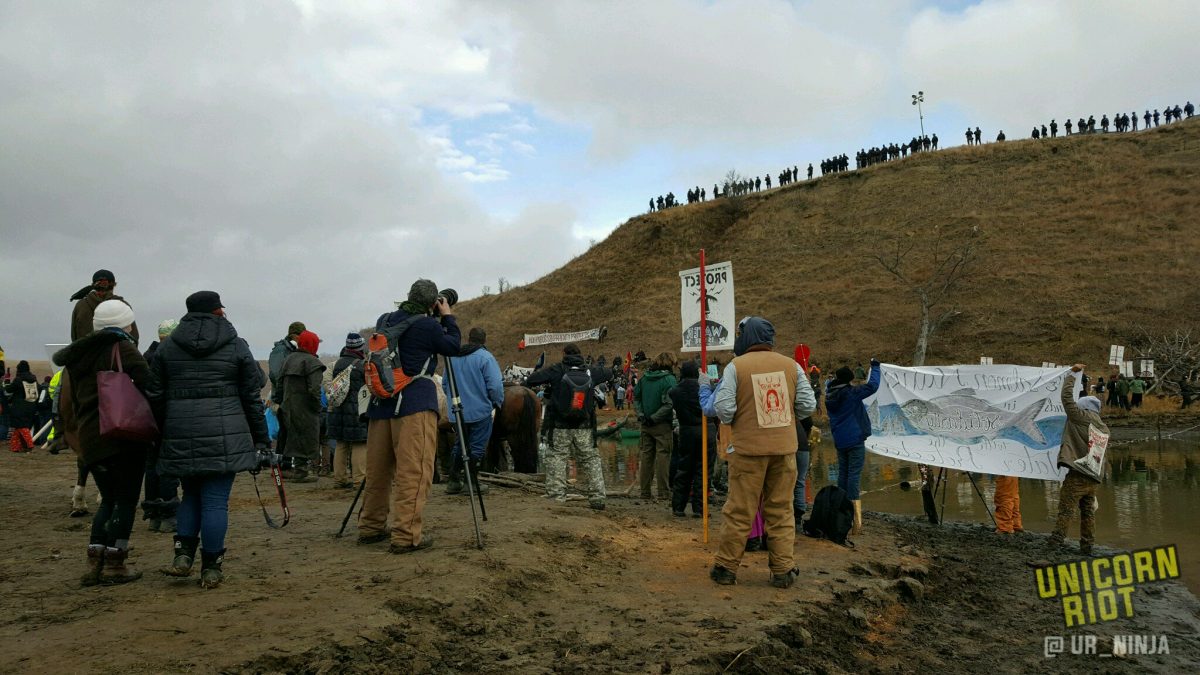 Water Protectors mark Thanksgiving with a Prayer Walk and ceremony at the base of Turtle Hill. (Photo credit: Unicorn Riot, used under Creative Commons license)

As people around the U.S. celebrated Thanksgiving, indigenous rights activists and environmentalists moved Thursday to reclaim a site near the route of the contentious Dakota Access Pipeline.

Opponents of the pipeline, who call themselves water protectors, built a bridge across a creek to hold a ceremony at the base of Turtle Hill as police looked down on them from the ridge. Indigenous water protectors say the site – now occupied by police – is sacred ground.

Water protectors were attempting to remove barricades on a bridge on Highway 1806 they say prevent emergency vehicles from accessing the Standing Rock Sioux reservation. The Morton County Sheriff’s Department called the Sunday action an “ongoing riot” and said water was used to put out fires.

Video from a live stream at the scene showed a high pressure jet of water hitting activists directly in temperatures below 30 degrees Fahrenheit. Medics estimate more than 160 water protectors were injured.

The Dakota Access pipeline has sparked unified opposition from Native Americans who say the project violates tribal sovereignty and endangers the drinking water supply for millions of people who depend upon the Missouri River. Water protectors have used both the courts and protest encampments to attempt to prevent the completion of the pipeline that is slated to carry fracked oil from the Bakken formation in North Dakota to a distribution hub in Illinois.

The editorial board of The New York Times echoed calls by water protectors Wednesday for President Barack Obama to take up the matter. And the Associated Press reported Friday that President-elect Donald Trump owns stock in companies developing the pipeline. Trump has thus far resisted putting his assets into a blind trust while serving as President, raising concerns about numerous conflicts-of-interest during his administration since the executive branch writes regulations and enforces laws that could affect his businesses and investments in private life.