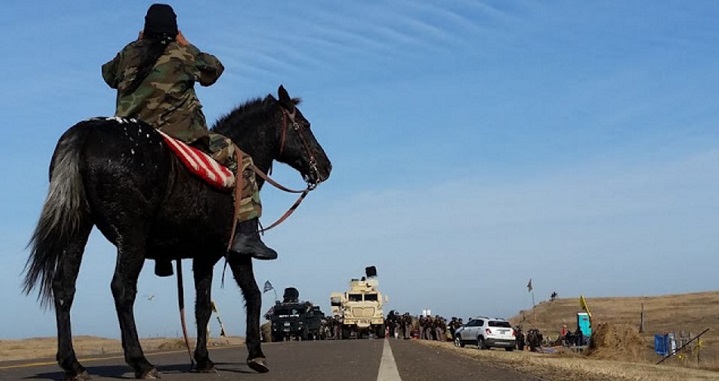 Led by the Morton County Sheriff’s Department, hundreds of police pushed protesters back from a roadblock and away from the recently established Winter Treaty Camp; arresting at least 141 people.

Officers reportedly fired rubber bullets, bean bags, concussion grenades and pepper spray as they removed people from what indigenous activists say is unceded native land under an 1851 treaty; police say the land is privately owned by the pipeline company.

Much of the standoff,including police use of a long-range audio device and riot batons on pipeline opponents, was captured in livestreams broadcast throughout the day.

But at a Thursday evening press conference, Morton County Sheriff Kyle Kirchmeier denied using any weapons other than pepper spray.

Kirchmeier also said that there was just one injury, a small cut. But the Standing Rock Medic and Healers Council says they treated people on scene.

One medic reports that two of his colleagues, clearly marked with red crosses, were arrested: “The medics here were driving our medic car. After we were struck and knocked off the back of the medic car, police advanced and, without even letting our medic driving put her vehicle in park, pulled her out and arrested her. One of our other medics was nearly struck by that vehicle while it was still moving because they pulled her out without letting her stop the vehicle. And he was arrested – both of those medics were arrested.”

Standing Rock Sioux Chairman Dave Archambault issued a statement late Thursday, reiterating the call for federal authorities to pay “immediate and close attention” to the situation” and “ensure the protection of First Amendment rights and the safety of thousands … at Standing Rock.”

Native American resistance to the pipeline intensified after the original pipeline path that ran closer to Bismarck was rerouted because of water safety issues. The Standing Rock Sioux say they are fighting to protect their water as well sovereignty, and that sacred land has already been destroyed.

The mass arrests of front-line indigenous environmental activists came the same day that a federal court in Portland acquitted anti-government militant Ammon Bundy and six others of charges related to their 41-day armed takeover of a national wildlife refuge in Oregon.