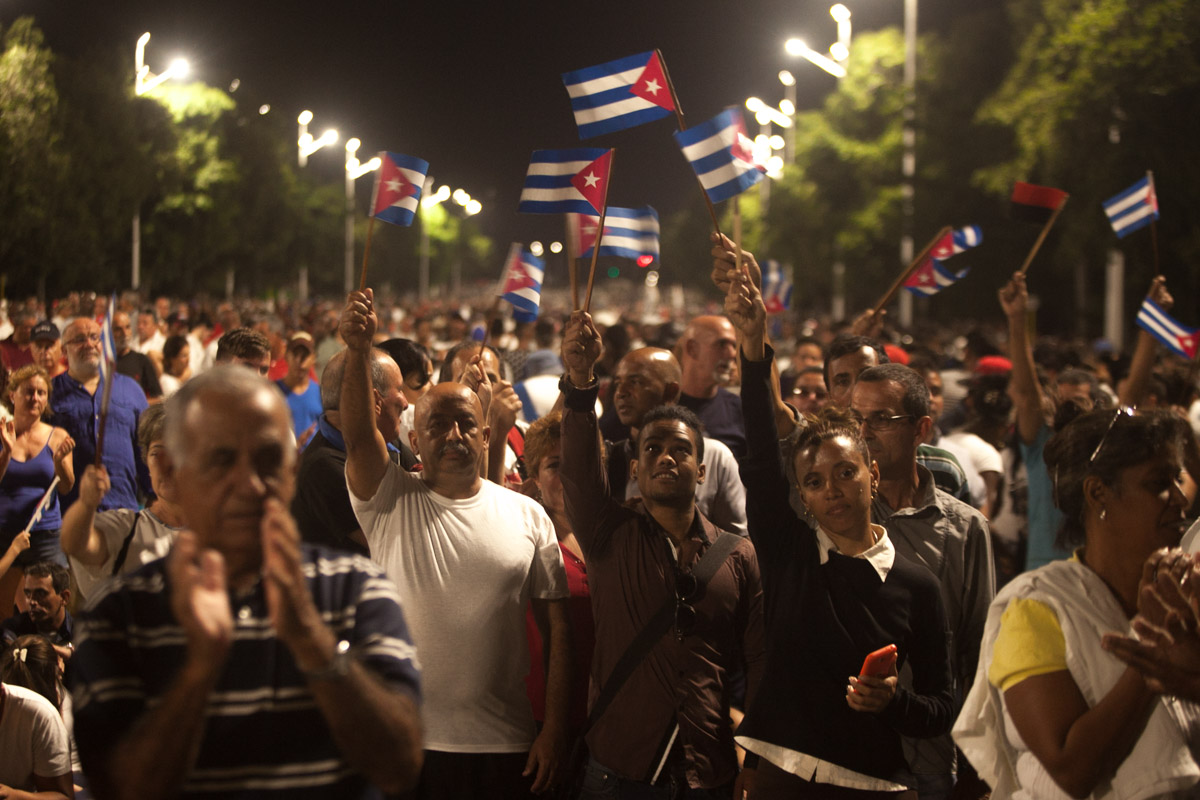 An enthusiastic group of Fidelistas raised their nation's flag before and after every single speech of the world leaders in attendance. (Photo credit: Andalusia Knoll)

Cuba is holding nine days of mourning over the death of Cuban Revolutionary leader Fidel Castro, who passed away on November 25 at the age of 90. A global symbol of revolutionary socialism, he survived eleven U.S. presidential administrations and hundreds of assassination attempts. Andalusia Knoll has more from Havana.

One million people filled Havana’s Plaza of the Revolution on November 29 to say goodbye to Fidel Castro, who ruled the country for nearly five decades.

Over twenty world leaders, mostly from the global south, attended the ceremony to share their eulogies, while leaders from wealthy nations were largely absent.

That was to be expected, as Castro purposefully cultivated alliances with poorer nations while taking a defiant stance against Cuba’s superpower neighbor, the United States.

Retired doctor, Lazaro Guillermo Herena said that Fidel’s legacy is most evident in Cuba’s systems of free education and universal health care: “This system is really what the entire world should have because it’s what’s most fair. It puts the human aspects before the economic. We wish the whole world could have this privilege that we have, of access to free education and the ability to receive medical attention without having to pay for it.”

Cuban doctors – sent on field work delegations all over the developing world – became the country’s de-facto goodwill ambassadors by providing free healthcare in many of the poorest regions of the globe.

The education model is also held up as one of the most successful gains of the revolution. Many Cubans are proud to point out their country has the hemisphere’s highest literacy rate.

“I would say that this was the start of Fidel’s great education campaign. At the time, we had to pull the majority of the Cuban population out of illiteracy. The most humble and dispossessed were the ones who didn’t have an opportunity to study,” explains Miguel de la Hoz, who participated in the nation’s first campaigns to combat illiteracy in the early 1960’s at age 14. “We had to teach them to think because to form one’s own criteria and reasoning based on available information is the way to develop oneself. Without that, we’d be living under a form of slavery.”

While hundreds of thousands of people turned out to the plaza, many holding photos of Fidel and waving Cuban flags, the event felt somewhat muted. Speeches were long and energy was low. Groups of young people stretched out on the ground, playing with their cell phones.

Yet when questioned about criticisms of Fidel’s rule, all were quick to defend the reputation of Castro and their country.

Thirteen year-old student Sheila Alexandra Terrero scoffed at the accusation that Cuba is not a free country, saying, “A free Cuba – for us – is one in which we are not dominated by anyone, one in which we have our own way of thinking, our way of acting and of expressing ourselves and one in which we create our future.”

Seventeen-year-old Beatriz Barrios said she’s going to honor Castro’s legacy by continuing with her studies: “Of course he was not a dictator, the complete opposite. He is the undeniable leader of our revolution, the positive leader who always has done good for our people. The objective has always been to advance, never the opposite. Whoever thinks that he is a tyrant – we think that is a total lie.”

From Havana, a caravan with Fidel Castro’s ashes retraced the route he and Ernesto “Che” Guevara took in 1958 on their way to take the capital in the revolution. The caravan will conclude in the city of Santiago over the weekend. During its trajectory, thousands of people lined the caravan’s path to say goodbye to their comandante.