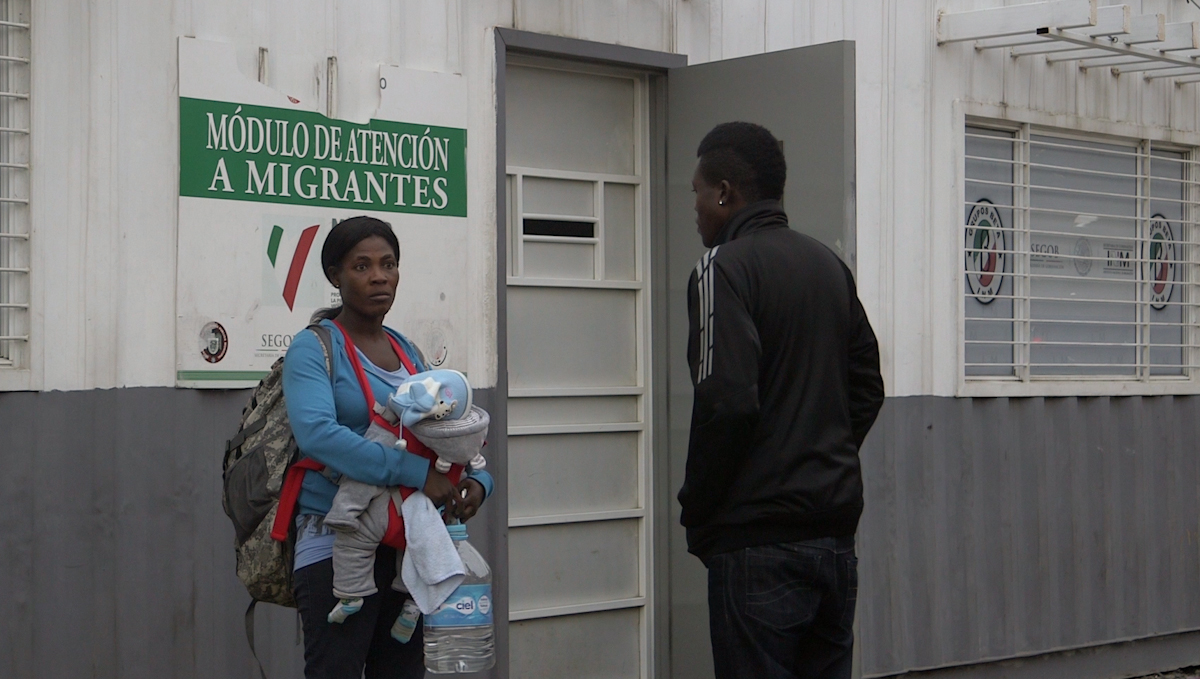 Brigitte Pierre traveled from Haiti to Mexico in the hope of reaching the U.S. (Photo credit: Andalusia Knoll)

Late last week, The Obama administration ended the ‘wet foot, dry foot’ immigration policy that, for decades, allowed Cubans arriving on U.S. shores to apply for legal residency. It’s a policy that many would-be migrants from Latin America and the Caribbean cited as unfair, given the preferential treatment in legal migration it gave to citizens of Cuba.

More recently, Haitians with relatives legally residing in the U.S. have had the possibility of coming to the U.S. with humanitarian parole visas. Applicants for those visas have arrived en masse in Tijuana, Mexico. But a surge in applications has created a backlog, effectively stranding thousands of Haitians on the Mexican side of the border. FSRN’s Andalusia Knoll files this report from Tijuana.

Tijuana has long been a key stop along migratory routes into the U.S. It’s common to see Central Americans toting light backpacks and the stern faces of Mexicans dumped at the bridge after deportation. But more recently, Haitian nationals have been arriving by the thousands.

Among them is James Cherenfant. He left Port au Prince after the devastating 2010 earthquake to work in Venezuela, and when that country’s economy collapsed, moved on to Brazil.

“When the earthquake struck, I lost my business there, my two-story house. Many people in my family died,” Cherenfant recalls. “It was a hard blow, it was very difficult and my mother said, ‘There is hardly any life here for you any more. Go elsewhere.’”

Thousands of Haitians migrated to Brazil and other South American countries in the aftermath of the earthquake. When the Brazilian and Venezuelan economies started going south, these migrants starting heading north, hoping to qualify for U.S. humanitarian parole visas.

Cherenfant traveled across ten countries with his wife and two small children. They are now stuck in Tijuana awaiting their interviews with U.S. immigration authorities, which may take many months.

The humanitarian parole visa program for Haitians started in late 2014 for the purpose of re-uniting families with relatives legally residing in the U.S. But applications have skyrocketed since mid-2016, creating a lengthy backlog.

Brigitte Pierre traveled the same route as Cherenfant’s family by herself. She first worked in Brazil and later in Chile but decided to leave for a country closer to her mother and her three-year-old son back in Haiti. Her interview with immigration authorities is scheduled for after Donald Trump’s inauguration, but she says she doesn’t understand why he would close the door to people like her.

“It makes me sad because how can they not receive migrants when there is so much food there and people are dying of hunger?” Pierre asks. “You have to find a way to help others.”

Pierre currently lives in a crowded makeshift shelter with a few dozen other Haitian migrants waiting for their paperwork to grind through the gears of bureaucracy.

Prior to the start of the influx of Haitian migrants in May of 2016, Tijuana had five migrant shelters. There are now more than 20.

Pat Murphy coordinates one of the preexisting shelters that used to focus on newly-deported Mexicans. He says this is a humanitarian crisis for which various governments are responsible.

“The U.S. government first, because they can’t process more than 30, 40, 50 people a day. Secondly the countries of origin, because people have to leave, they can’t be taken care of. The disaster in Haiti was over several years and even though so much money has been invested back in that country, it is still in a disaster zone,” Murphy points out. “We can also blame Brazil a little bit because they gave visas to these people, to over 40,000 Haitians and recently with their economic decline they started basically pushing people out of the country. And then fourth, I think, the Mexican government because they keep letting them into Mexico without any real strategic plan except go to the north and, they won’t say this publicly, but hopefully you will cross and be out of our hair.”

Pierre, who lives at one of these recently opened shelters, has found work at a pizzeria while living in a sort of migratory limbo.

That wait doesn’t end upon arrival in the U.S. The next stop is often a detention center where applicants await a final decision. The lucky ones will be released to sponsoring relatives, the less fortunate are deported to Haiti. Despite the odds, it’s a gamble that’s already in process for thousands of Haitians already in route from Brazil.