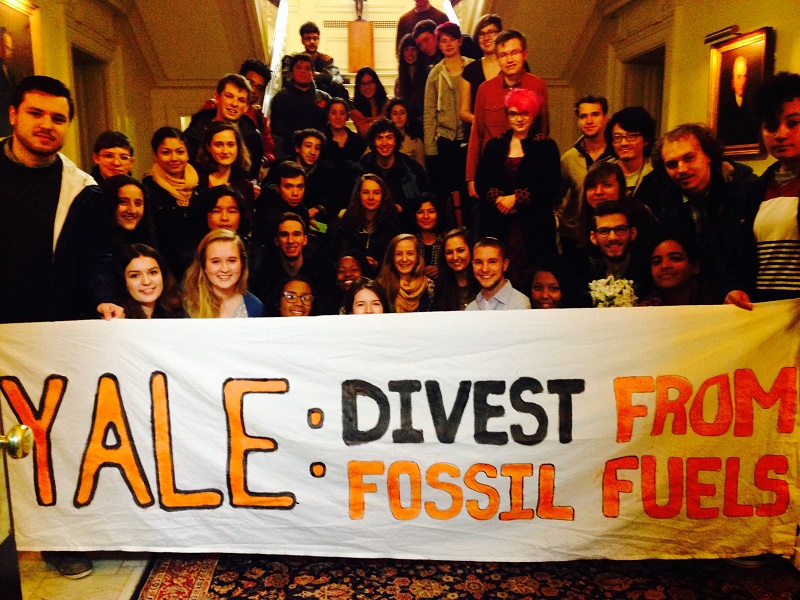 Students at Harvard and Yale have joined other schools around the country in the past week as they step up their push for divestment of fossil fuel stocks from their universities’ multi-billion dollar endowment portfolios. Swarthmore students have been holding a continuous sit-in since March 19. Two weeks ago Syracuse University announced it will divest, joining more than 20 other schools. Their efforts are part of non-violent direct actions this spring being coordinated through the Fossil Fuel Divestment Student Network. FSRN’s Melinda Tuhus reports from New Haven.

“We are here because the fossil fuel industry depends on its ability to keep pumping carbon dioxide into the atmosphere, just as our survival depends on our ability to stop them, and right now they are winning,” reads freshman Phoebe Chatfield from Fossil Free Yale’s brief statement to university president Peter Salovey, just after she and 47 other undergrads filed in to the school’s administration building April 9 and sat-in outside his office.

“While, as you know, it discussed the issues and made the recommendation it came to,” Salovey said, “which was then accepted by the Yale Corporation not to divest, they are open to new arguments, new information, and have always said that they want to listen to student input on this issue.”

Fossil Free Yale’s Nathan Lobel questioned how productive the effort would be given that the Yale Corporation already rejected a proposal students based on the university’s own guidelines for ethical investment.

“So last year we designed a divestment proposal that was purposefully exactly within the lines of divestment through that document,” Lobel noted. “And even with all that compromise, the Yale Corporation decided in August that they were not going to divest. And not even going to do the most basic part of that proposal, which was to ask companies how much carbon the burning of their fuels was producing.”

Now students have upped their request to include the standard demand of most colleges, churches and municipalities that have taken a position on the issue: divestment from the top 200 fossil fuel companies. Three days after the sit-in at Yale, students, alumni and other members of the Harvard University community kicked off what they’re calling Heat Week to pressure their university to divest.

At $36.4 billion, Harvard has the largest endowment of any college in the world. President Drew Faust announced in October 2013 that Harvard would not divest because the endowment is intended “to advance academic aims, not to serve other purposes, however worthy.”

“While the event was happening, a core group of students went to begin the blockade of Massachusetts Hall, which is the building where our president has her office,” said Harvard student Chloe Maxmin, who is active with the divestment campaign on campus. “Our ask is for Harvard to divest its direct holdings from the top 200 publicly traded fossil fuel companies. We can actually see our direct holdings, so we know that’s about $20 million in four companies. So it’s not that much, given the size of our endowment.”

Yale’s Nathan Lobel says the Yale Corporation does not divulge the details of its finances, so the students don’t know what its fossil fuel company holdings are. Yale’s endowment is $24 billion.

Just like the administration at Yale, a spokesman for Harvard said in a statement Tuesday that Faust and the university have provided many opportunities for divestment supporters to raise their concerns.

In addition to the blockade, Harvard law students last year filed suit against the Harvard Corporation, challenging management of its funds as a non-profit charitable institution.

“Our argument is that by investing in fossil fuels, which are known to cause serious harms to the environment and human health, they are in violation of those charitable duties,” explains second year law student Ted Hamilton. A judge dismissed the suit last month, but the students are appealing.

Some have criticized the divestment movement as impractical, saying holdings in top-traded commodities like oil and gas make sound business sense for large institutions. Yale freshman Maya Jenkins responds that top universities should be able to apply the ethical theories of their classrooms to the financial practices of their endowments.

“We know that our school divesting is not going to crash the market,” admits Jenkins. “But what it does seek to do is change the conversation and stigmatize these industries. And so it’s a political statement more than anything, and I think especially at a place like Yale with a lot of clout, divesting would help to shift and change that conversation.”