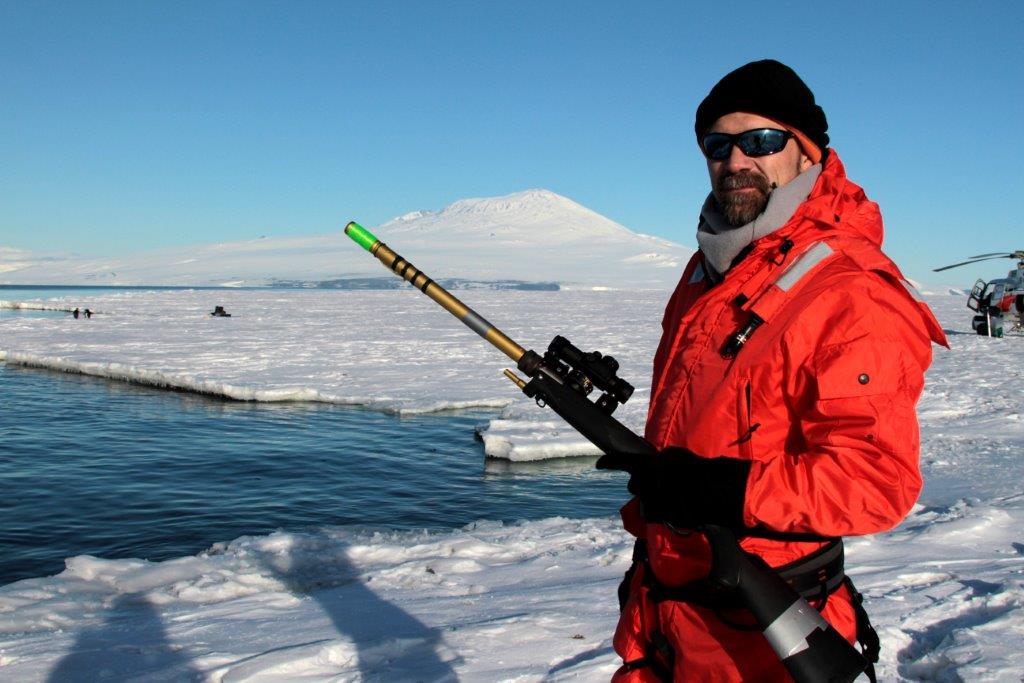 In Antarctica,  an enormous crack that’s now 100 miles long is moving across the world’s southernmost continent. As a result, the British Antarctic Survey is moving its Halley Research Station to avoid its falling into the ocean.  But not everything in “The Land of Ice” is threatened. In fact, the world’s largest marine protected area was recently created in the Ross Sea at Antarctica.  More than 1.5 million square kilometers, or 600,000 square miles, of the Southern Ocean will gain protection from commercial fishing for 35 years.

FSRN’s Jim Kent sat down with a scientist from the small South Dakota town of Hot Springs who played a key role in bringing 24 nations and the European Union into agreement to protect marine life there. His name is Ben Sharp and he works for New Zealand as part of the Convention for the Conservation of Antarctic Marine Living Resources. He began by asking Sharp about New Zealand’s role in the project.

Ben Sharp: New Zealand led the process of designing and proposing what ended up being the world’s largest marine protected area, which they did together with the United States – proposed this thing together, designed it and proposed it. It was about five years of my life that that was the main part of my job that I was doing, convincing 25 member countries to protect what’s now the largest, effectively a national park, but in the ocean. As part of the scientific justification behind the design of the marine protected area was to protect areas where top predator populations rely upon the same resources that people are also catching. We have a fishery for something called Antarctic toothfish – they’re sold as Chilean sea bass in restaurants. That same fish is also, we think, a critical part of the diet for killer whales and Weddell seals. So we were looking for a way of designing this fishery in such a way that the places that are important for the predators are protected and they get the first crack at the fish, and the fishermen fish in deeper water where the predators can’t go. This was the most persuasive argument that we made and the scientific justification for the protected area. In the course of doing that, a lot of the other countries – legitimately, this is not a criticism – said this is all based on logic and first principles but where’s your actual evidence? Do you have a killer whale program? And, well, no, we don’t. I anticipated this, so in the course of designing this I was also advocating for we need to start studying the things that we were using to justify it so we’d have a real science behind it as opposed to just scientific arguments. The killer whale program, through the efforts of myself and a lot of other people, ended up getting started.

Jim Kent:Who came to you and said let’s do this?

BS: The convention was talking about it as a concept as early as 2005. It’s a consensus forum – you need all 25 members have to agree. One person says no and nothing happens, you come back the next year and you try again. With the countries around the table, it was fishing countries and there’s poor countries and rich countries and Western countries and Eastern countries. There’s countries that fish and countries that don’t. So to get agreement on something as big as that, it almost seems like an impossible task. But it’s a wonderfully designed convention in that the scientific basis for decision making is that you have to have a balance between conservation and utilization, but the conservation requirement is very stringent. It’s the most conservation minded ocean management forum out there – I don’t think anyone would disagree with that. The other part of the requirement is that all decisions have to be made on the basis of science. Effectively, the scientific forum leads and the diplomatic or political level forum either agrees or doesn’t, but the proposals have to come up through the scientific committee, which is an independent body. I think we actually made a scientific design proposal in 2011 and up until then it was really a science process. I was leading that for New Zealand and my counterpart in the United States. It was only after that that it became suddenly politically very hot – suddenly the diplomats and the rest of the world and the international NGOs started paying attention to what we were doing.

JK: Was that a good thing that the politicians were getting involved, or a bad thing, or both?

BS: Well, of course. Nothing happens until they get involved, obviously. It’s a declaration of what can and cannot happen on the high seas, which has all kinds of implications for international precedent and sovereignty issues and lots of things that are very political. The Antarctic Treaty is – the basis for it is that all the countries set aside any ideas of territorial claims in Antarctica for the purposes of the treaty. Basically, all of the countries pretended that sovereignty claims don’t exist. But the sovereignty claims are still sort of there, on hold in the background, which makes everything you do intensely politically. So nothing was going to happen until it got to the stage of getting the political process in place. What was very gratifying for me was I actually got to be there for every step of the process, and then once it got to the political stage I ended up being sort of the last scientist in the room as the diplomats were taking over. It eventually traveled to 13 different countries. We finally got a agreement of all 25 countries around the idea of how it should be designed and which areas were most important. So there was still a bit of legal room, but locked down the core areas and principles in 2013 at a special meeting that was held in Bremerhaven, Germany. It took three more years to actually get the political level agreement because of other geopolitical things that were happening, and a bit of a staring contest for three years. But eventually, one month ago, we got the last member on board and everyone agreed to it.

JK: How do you feel as a scientist that, regardless of what it is that brought these countries together, you had a major – you and whoever else was involved in it – you had a major part in, for whatever reason, bringing together all these countries that in other circumstances might not be in agreement on anything, but here’s something we can agree on? How do you feel about being able to participate in that and succeed in doing that?

BS: It’s a wonderful feeling and it’s what was most gratifying about the role and why I spent so much of my life doing this, for all of those years. It’s that the value systems of the people sitting around the table are incredibly different; the Japanese, and the Koreans, and the Russians and the Norwegians all see the world differently and instead of trying to bang the table and convince them that our value system was superior and therefore they should do what we said, we said, “No, we’ve agreed to scientific principles and this is the one language we all have in common and the one thing we’ve already agreed to.” By taking that approach, as opposed to anything that’s proposed for conservation or preservation – a lot of value based arguments – effectively that wasn’t going to get us there because what we agreed when the convention was designed 30 some years ago, the one thing we have in common is science and that’s what we’re going to make decisions on. So, it was really the way that the convention itself is framed that made that possible. It’s wonderful and to be honest, I think that if you allowed scientists to lead processes in all kinds of forums, it would break through a lot of barriers because, by definition, the truth matters, and, by definition, evidence counts for something and it’s not just about power, it’s not about politics, it’s not about who can bang the table the loudest. A country like New Zealand, we don’t have a giant GDP, we don’t have a nuclear arsenal, we’re not a big player, but we can actually be more effective in a forum like this precisely because of that. We have the reputation as the neutral, honest broker and that allowed us to just stay focused on having a scientific process and it carried the day.

Ben Sharp works for New Zealand as part of the Convention for the Conservation of Antarctic Marine Living Resources.