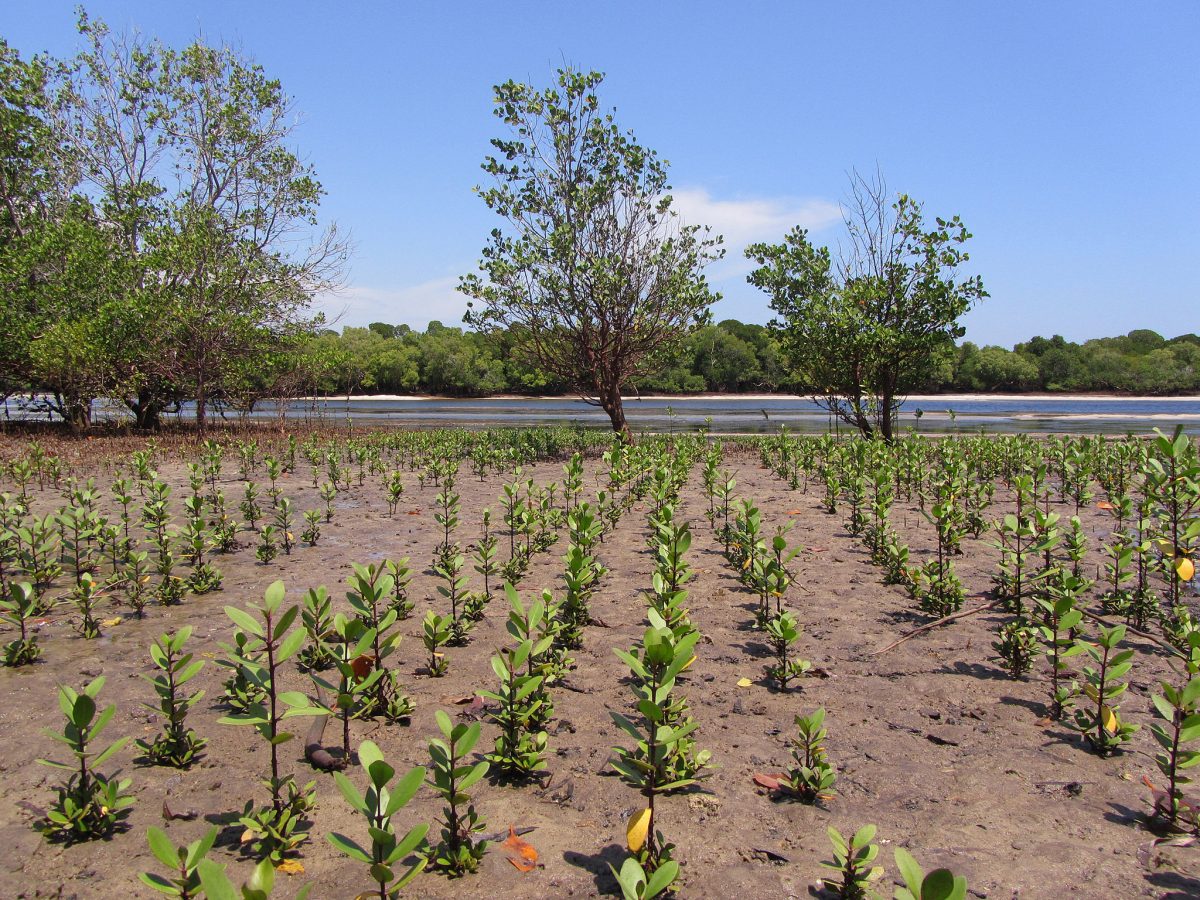 Two villages living adjacent to the Indian Ocean in the southern coast of Kenya are improving their livelihoods after earning money from selling carbon credit from mangrove trees to international environmental organizations. Diana Wanyonyi reports from Mombasa.

In the swampy, soft mud of the mangrove forest on Kenya’s south coast, farmer Idi BomaniI is with a local community group surveying and planting some of the seedlings that have fallen from the trees in the estuary.

Idi is a member of the Mikoko Pamoja community project, a conservation and restoration program in which locals farm mangrove trees on the shores of the Indian Ocean.

Mikoko Pamoja is the Swahili word for “mangrove.” The group was founded in 2009 after the residents of two nearby villages – Gazi and Makongeni – realized that the number of mangroves, which they depend on daily, were rapidly disappearing due to illegal harvesting for firewood, burning charcoal and building materials.

Local women, like Thimah Matano, are taking a central role in the effort to reclaim their mangrove population: “We women are actively involved in planting of mangrove because we know that they are important in conserving the environment and also it gives us fresh air and many fish.”

Mangroves grow along the shoreline, and are very salt tolerant. They provide vital shelter for young marine life – a nursery for fish.

Salim Abdallah is project coordinator for Mikoko Pamoja. Abdullah says that in the past two years, they’ve started more than 6,500 mangrove seedlings. The group is also planting Australian Pine, or Casuarina, a fast growing tree that can quickly fill the need for firewood and building materials.

It’s an economic and environmental win-win. Locals have access to the less expensive timber, and the communities can engage in a carbon trade. Abdallah says that means selling carbon dioxide credits to environmental international organizations on an ongoing basis.

“We are able to capture and store carbon (IV) oxide, which is around 3,000 tons of carbon. This is now annually. So, from this now, we can be able to participate in the carbon credits business globally. We are selling these credits to voluntary buyers of carbon overseas,” Abdullah explains. “Now, Gasi Bay community is able to get around 1 million Kenya shillings annually, which is around US$12,000.”

Social impact officer of the Mikoko Pamoja project Anne Wanjiru says they plan to integrate environmental mangrove education in the syllabus of primary schools: “I will be trying to create educational materials that we can use to teach because we always receive a lot of visitors and students from university and even primary schools.”

“And that is why you see most of the oil industries will be based in the tidal area or they are based in the delta, because of the carbon stored by the mangrove and other bookable ecosystems like sea grass bed and salt marshes,” points out Kairo.

Dr. Kairo notes that preserving the mangroves is vital to keeping the carbon contained, as well as fostering fisheries and providing shore line protection.

“By protecting our mangrove, we will be enhancing carbon absorption potential and will be reducing the carbon footprint of our county,” Kairo explains.