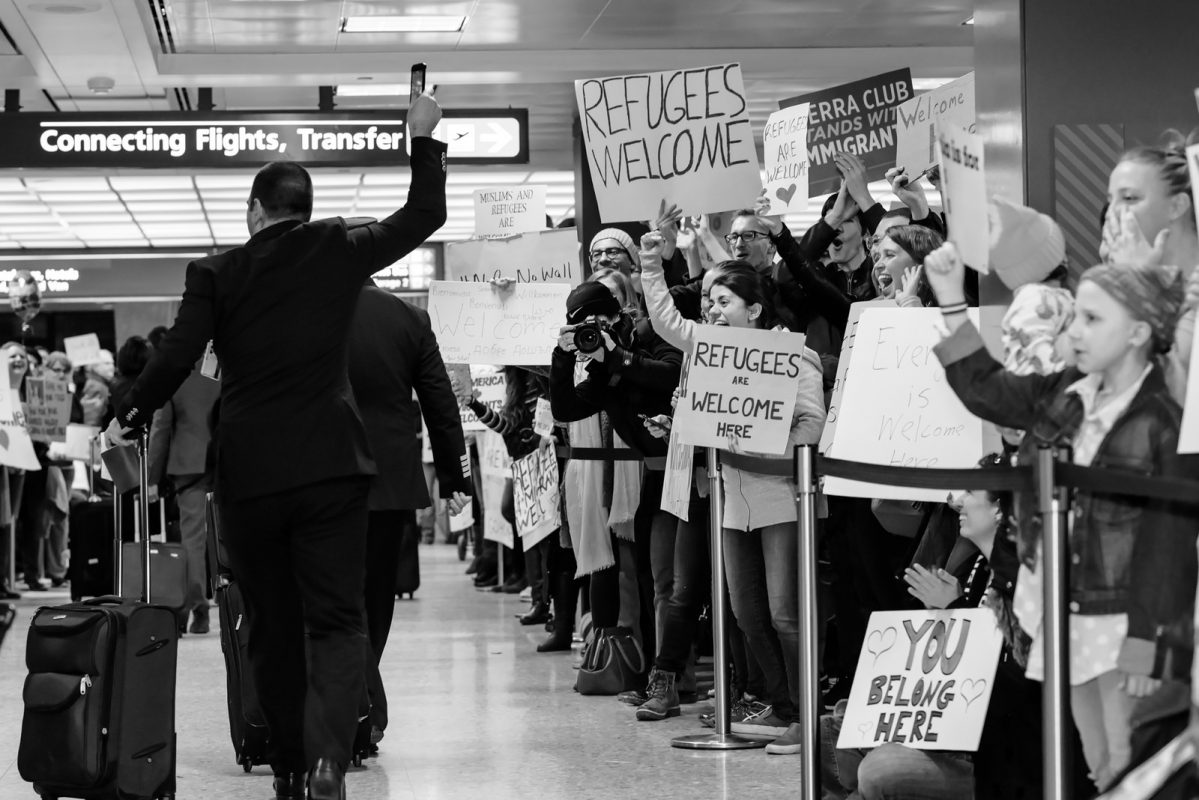 The Trump administration is taking a second crack at using an executive order to block people from half a dozen countries from entering the United States. The order signed today – and set to take effect later this month – will revoke and replace the controversial executive order signed just one week after Inauguration Day. FSRN’s Nell Abram has more.

With no public ceremony or fanfare, President Donald Trump signed a revised version of his controversial travel ban Monday morning. The updated executive order blocks new visas for individuals from six Muslim-majority nations for a period of 90 days and retains a 120-day ban on refugees entering the country, though it no longer indefinitely bars Syrians.

“Accordingly, it is important to note that nothing in the executive order affects existing lawful permanent residents or persons with current authorization to enter our homeland,” said Department of Homeland Security Chief John Kelly. “We don’t make the law, but are sworn to enforce it – we have no other option. We are going to work to implement and enforce it humanely, respectfully and with professionalism – but we will enforce the law.”

The original travel ban, issued in late January, blocked entry to all foreign nationals from the six countries still covered – Iran, Iraq, Libya, Somalia, Sudan, Syria, and Yemen, plus Iraq – irrespective of their US immigration status.

The first ban also took effect immediately. Legal permanent residents who had traveled abroad were unable to return home; current visa holders from the nations on the list couldn’t enter the country.

Under the new version, implementation is delayed ten days and immigration officers are permitted to grant waivers on a case-by-case basis.

U.S. officials continue to deny the ban targets Muslims, claiming rather that the nations in question were unable to provide sufficient information about their citizens to satisfy U.S. vetting requirements.

After the president signed the revised order, the Secretaries of State and Homeland Security, joined by the U.S. Attorney General, held a very brief press conference. They each delivered prepared remarks and took no questions.

Secretary of State Rex Tillerson explained why Iraq was removed from the revised executive order: “Iraq is an important ally in the fight to defeat ISIS, with their brave soldiers fighting in close coordination with America’s men and women in uniform. This intense review over the past month identified multiple security measures that the State Department and the government of Iraq will be implementing to achieve our shared objective of preventing those with criminal or terroristic intent from reaching the United States.”

Tillerson did not expound on what those security measures are, or how they will affect Iraqi nationals seeking entry into the United States.

Much criticism of the travel ban has centered on the fact that no one convicted of a terrorist attack on U.S. soil hailed from any of the countries on the list. But according to Attorney General Jeff Sessions, many people seeking to “support or commit” acts of terrorism have entered the country through the refugee program.

“In fact, today more than 300 people – according to the FBI – who came here as refugees, are under FBI investigation today for potential terrorism related activities,” Sessions said.

Immigrant advocates point out, however, those investigations are just that – they aren’t convictions.

As in the prior ban, the total number of refugees who can be resettled in the U.S. in any given year is capped at 50,000. Those already approved, but not yet in the country, may find themselves back to square one, due to a limited window of time during which they must travel.

The update comes six weeks after President Trump’s initial executive order, which quickly created a firestorm of chaos and international condemnation, trapping travelers mid-trip and wreaking havoc at airports. One week later, a federal judge in Seattle issued a nationwide stay and legal challenges to the original ban are still making their way through the courts.

Karen Tumlin, Legal Director of the National Immigration Law Center, says those cases should still stand, given the revised ban is not substantively changed, and questions about intent are identical.

“For me, there’s no question that this revised Executive Order, when it goes into place later in March, is just as unconstitutional under the free establishment clause as the original, regardless of the tweaks to the minority religious exemption. The touchstone principal of the establishment clause is that the government shall not discriminate against certain religious groups or favor or disfavor them,” Tumlin explains. “And even with this, again, what I think is a cosmetic change, from top to bottom, this is an order that attempts to discriminate against those considered to be Muslim or from Muslim countries.”

The travel ban is one of a number of executive orders the president has signed related to immigration. Abed Ayoub is Legal and Policy Director for the American-Arab Anti-Discrimination Committee. He says that be it this travel ban or the first – the upshot is the same.

“This ban is part of the, it’s clearly part of the administration’s ongoing anti-immigrant efforts,” Ayoub says. “When you couple this with the raids that we are seeing and the detentions that we are seeing at the southern border – there’s clearly an agenda here to push forward an anti-immigrant agenda from this administration and we will continue fighting this and continue doing what we can to protect our community from such actions.”