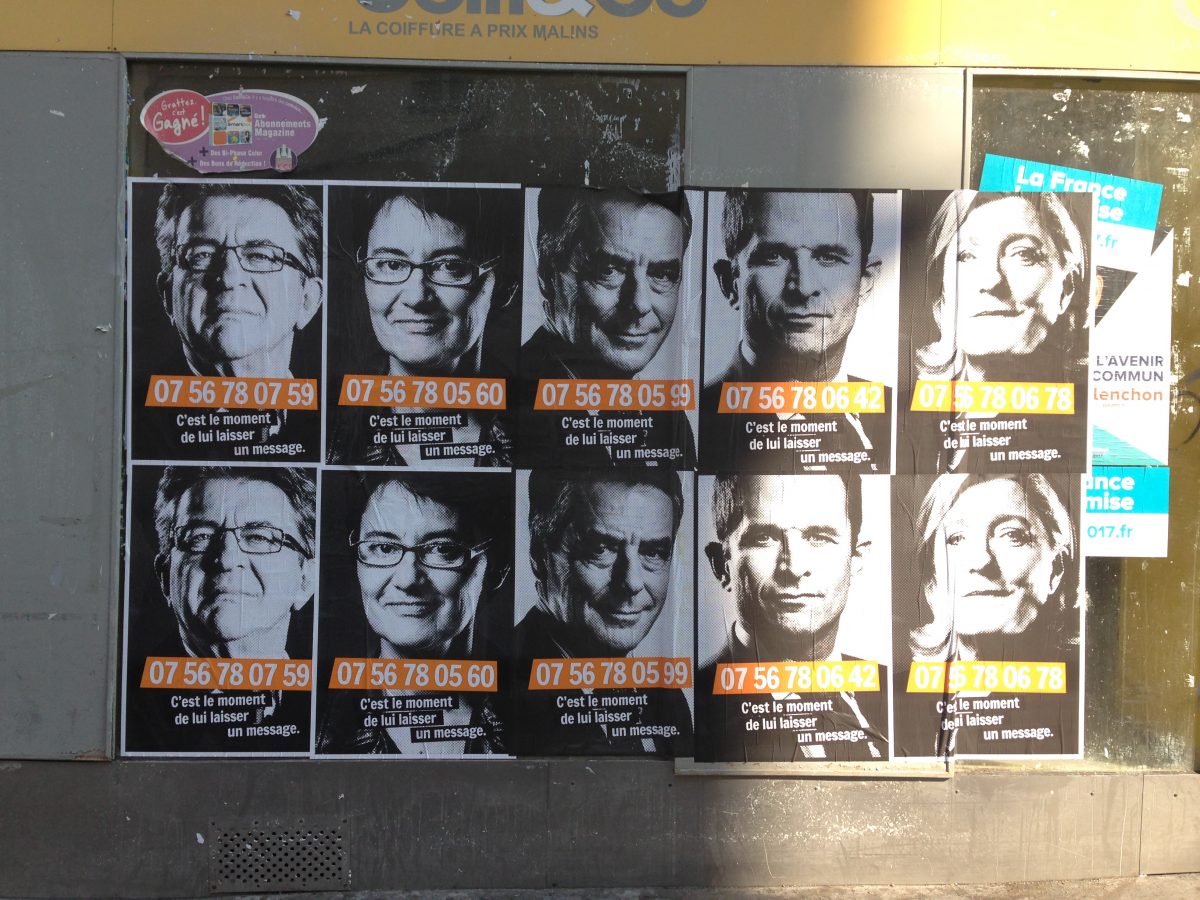 As voters in France gear up for the first round of presidential elections this weekend a gunman opened fired on police in Paris Thursday. One officer died, two others were injured and the gunman was shot and killed as he tried to flee the scene on the city’s storied Champs-Élysées. The incident is adding fuel to the nationalist fire that’s thrust the country’s far right-wing party to the top of the polls just days ahead of the vote.

The elections come amid an international surge in right-wing populism. And as with the recent U.S. election that brought Donald Trump to power, analysts in France claim that Russia is interfering in the political process.

A confluence of factors has pushed what were long the major political parties in the country to the backseat, and minority outsiders are riding up front in another election that could the nation’s presidential contest. FSRN’s Khaled Sid Mohand reports from Paris.

The long dominant center-right and center-left parties in France are eclipsed in this election by three formerly fringe candidates: Marine Le Pen of the far-right Front National party, the radical left Jean Luc Mélanchon and a new face on the political landscape, Emmanuel Macron.

Macron served as the Minister of Economy in the socialist government of François Hollande. The former executive at the Rothschild Bank graduated from the prestigious National School of Administration.

His popularity has grown within a political vacuum created by the disaffection of right-wing party voters, Les Républicains, whose candidate is engulfed in a corruption scandal, and the socialist party of the current, and deeply unpopular, president, François Hollande.

But how could Macron, only 39-years-old and with no political platform when he declared his presidential ambitions, climb so high in the polls?

“I wouldn’t say he didn’t have any program, he had a lot of new ideas. He wanted to provoke and create a change in the society, that everyone altogether, you can be from the left side, the right side or from center,” says Mariana Mendza, one of Macron’s spokespeople. “Your main goal and your main altogether, it’s to generate a progress into the society.”

Journalist Nadia Sweeney works at the weekly newspaper Politis and has attended most of Macron’s rallies: “He doesn’t really have ideas. It’s quite empty. We listen to his speeches, they’re long sentences without real content. But he has succeeded in selling himself like a yogurt — with a whole marketing plan. He’s sent teams into the streets, but unlike his rivals, they conducted market studies with a questionnaire and then used the results to adjust his speeches at local rallies.”

The shifting political ecosystem in France is also shaped by corruption in the country.

Philippe Preau is a history teacher. At an anti-corruption rally, he said he was shocked by what foreign media has dubbed Penelope-gate – a scandal involving the wife of a center-right candidate François Fillon.

Preau explains the effect these scandals have not only on his pupils–but also their parents.

“We try to teach them the republican values. We tell them that the Republic is the best political system. We tell them about liberty, equality and brotherhood,” says Preau. “But it’s been hard to fulfill our task these days, because children talk about it –the scandals. They say that they are all rotten and all corrupted.”

As France continues to struggle with an influx of refugees, right-wing nationalism is on the rise and many see candidate Marine Le Pen as an emergency exit.

“What would happen if, under Merkel’s pressure, one of her protégés, Macron or Fillon, continues to accept millions of migrants? Your neighborhood, your village, your children’s school, your life, your wages will inevitably be impacted by immigration,” Le Pen says. “I, as a president, will put borders back in place the first day in office.”

The leader of the National Front has intensified her recent speeches to consolidate her electoral base – and her popularity has skyrocketed. But what explains the spectacular rise of the far-right party?

Marwan Mohamed, Director of the Collective Against Islamophobia in France, says it’s their ability to recode racism against Arabs and blacks into anti-Muslim rhetoric which, in France, is more publicly acceptable.

“Islamophobia, in its political form, has been able to capitalize on concepts that have a positive connotation in France, for example the concept of laicité [secularism] or women’s rights or even freedom of expression, that have been taken away from their initial meaning and recoded into a form of exclusion,” Mohamed explains. “So, for example, laicité, which describes the state-church separation and it has been reinterpreted, recoded into a form of religious censorship.”

From the other side of the spectrum comes Jean Luc Mélanchon, a radical-left candidate and former member of the socialist party who launched his own movement, known as “insubordinate France” – or “La France Insoumise.”

John Mullen is a French-British national who has lived in France for more than 20 years. Mullen is a professor at Rouen University and is an active member of the movement.

“Well, he does have some resemblance to the ideas of Bernie Sanders or Jeremy Corbyn. And he’s running for this election on a very radical program: full employment, 100 percent organic agriculture, 100 percent renewable energy,” Mullen says. “He’s really saying it’s time to completely change the way the economy works. “

Unlike the fascists in Italy and the Nazis in Germany, far-right ideology here lies in the history of the French colonial empire – and more specifically in its loss.

Historian Françoise Vergès worries about the chances that Marine Le Pen might win the second round of the election and secure the presidential post.

“Aymé Césaire in 1956 talked about the boomerang effect, the fact that colonialism will come back to you, and colonial history reentered the French imagination through the migration and the migrants as the enemy – are the internal enemy,” explains Vergès. “So we could have a Trump moment in France flattering the worst feeling, flattering the fact that the other is your enemy.”

And polls suggest this could happen. The far-right National Front’s Marine Le Pen is currently holding the lead just days ahead of the first round this Sunday.