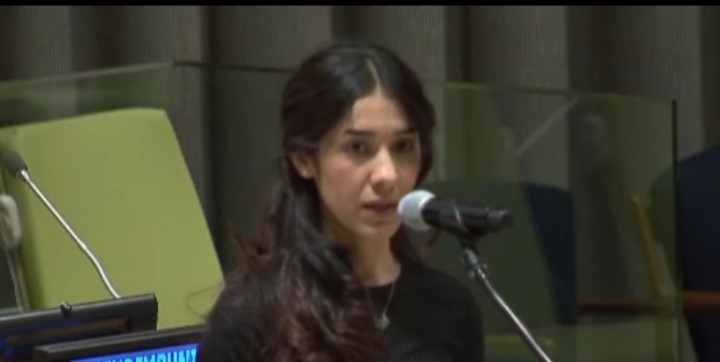 As the U.S.-led offensive against ISIS in the northern Iraqi city of Mosul continues, officials are now turning their attention to taking back the city of Raqqa, in Syria – the last of ISIS’s major urban strongholds.

If ISIS loses its territorial claims across Iraq and Syria, what comes next for the terrorist organization that has perpetrated atrocities against civilians in both countries? To human rights activists, including Amal Clooney, the answer is a war-crimes tribunal. FSRN’s Patricia Nunan has more from New York.

Nadia Murad is from Iraq’s minority Yazidi population. The 23-year-old woman was held by ISIS as a sex-slave, before escaping and eventually making it to Germany. She recently addressed the United Nations, for the second time.

After the horror of what she and other Yazidi women have gone through, she finds the international community’s failure to take legal action against ISIS almost incomprehensible.

“Why it is [sic] taking so long, I cannot understand why you are letting ISIS get away with it,” Murad says. “Or what more you need to hear before you will act.”

Murad now serves as a UN Goodwill ambassador for victims of human trafficking. She also has a high-profile human rights attorney – Amal Clooney, who has taken on the Yazidi cause.

But conducting a war-crimes tribunal requires evidence, and gathering evidence requires an investigation.

ISIS holds chunks of territory across both Syria and Iraq. Because Iraq is a friendly government and Syria is not, Clooney is among those calling on Iraq to allow UN investigators to gather forensic evidence of war-crimes committed by ISIS within its borders.

“The Iraqi government is aware that a one-page letter to the Security Council requesting the investigation would be sufficient to trigger a vote on the resolution,” Amal Clooney said at the UN. “But months have passed, deadlines set by the UK have come and gone, and the Iraqi government has declined to send the letter. So there has been no vote, no resolution, no investigation.”

Of course, war-crimes carried out within the Syrian conflict are not limited to those committed by ISIS.

Last week, the U.S. carried out air strikes on a Syrian air-base after it said the Syrian government used chemical weapons on civilians. Since then, President Donald Trump has called Syrian President Bashar al-Assad a “butcher,” and has made repeated references to Syrian war-crimes. But Wednesday, the UN Security Council failed to pass resolution condemning the attack and calling for an international probe of the incident, after Russia vetoed the measure.

Balkees Jarrah is with the International Justice Program of Human Rights Watch.
She points out that the UN General Assembly did pass a resolution in December setting up an “investigative mechanism” for Syria – which, like what Clooney wants in Iraq – would allow investigators to gather evidence of atrocities allegedly carried out by Syrian authorities for potential use in a war-crimes tribunal.

“At the moment, states are committing funding to the mechanism so that it can begin its work,” Jarrah explains. “To our knowledge despite having voted in favor of the resolution to establish the mechanism, the U.S. has not committed any funding to date.”

Rights workers say Iraq may be dragging its heels on allowing the UN to investigate ISIS within its borders because it fears some of its own forces could be found to have committed atrocities.