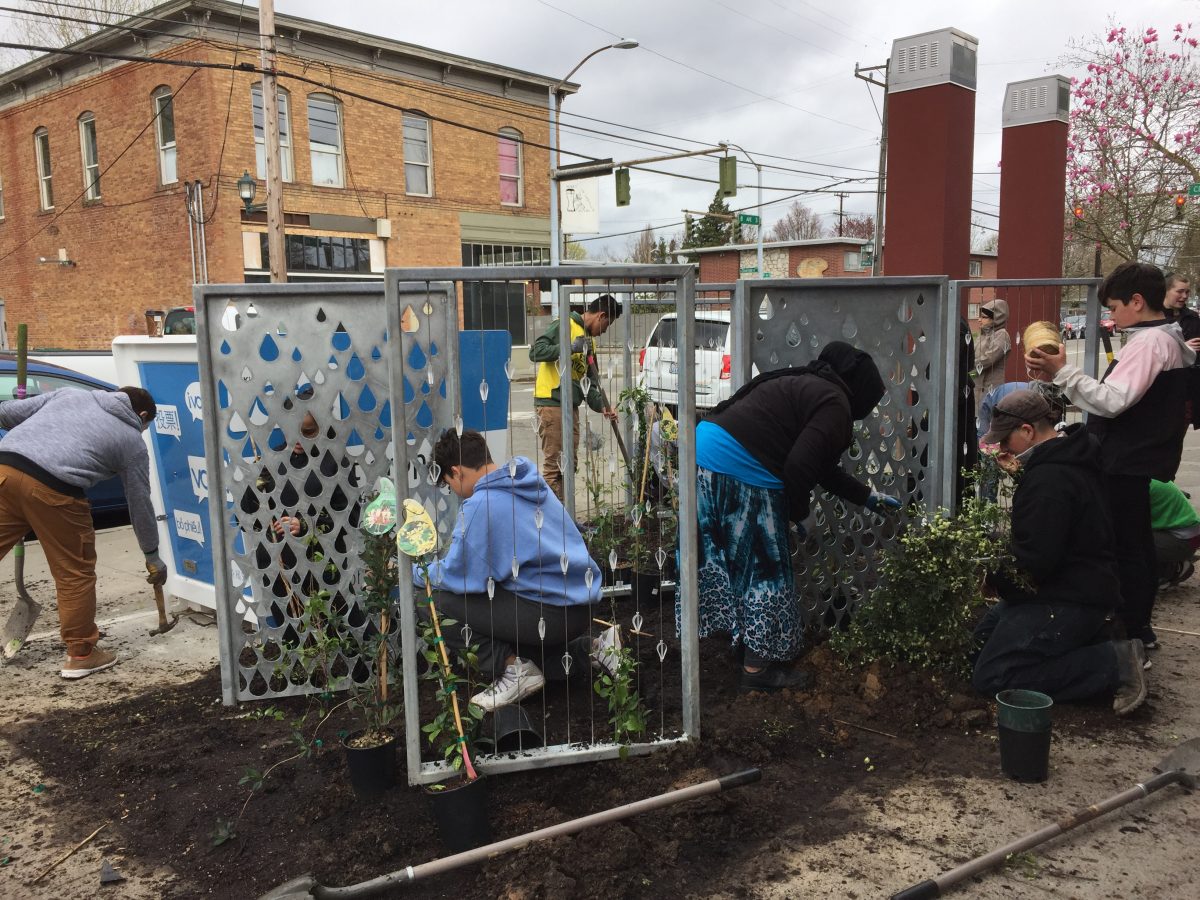 Hear the phrase “green walls” and you might think perhaps the southern border wall proposed by the Trump administration is taking on a eco-friendly theme. But the green walls going up in Seattle’s South Park are being built to clean the air and reduce air pollution. And they’re walls many in the immigrant community are putting up themselves.

A project of the Duwamish Community Action for Clean Air Project, the first set of green walls were put up on the grounds of the South Park Public Library. The local merchant’s association says they’re ready to help build more and talks are underway with the Port of Seattle whose trucks run through the neighborhood, for a bigger project. Martha Baskin has our story.

Beneath hand-crafted green wall panels on the site of a public library, youth in Seattle’s South Park immigrant community plant honeysuckle, jasmine and clematis. Soon their leafy vines will climb metal cables welded onto the panels. When fully grown, the green walls will filter particulates and help clean the air in a neighborhood dominated by highways, air traffic, and industry.

“We’re doing a green wall because in South Park we think there’s lots of pollution.” Hodan Mire is a local high school student.”So, we’re trying to put our hand in and help out with that.”

Asthma rates for young people here are double compared to the rest of Seattle. Life expectancy is also 13 years lower. So the community came together to find solutions.

Planting trees was the first solution. Trees are carbon storage experts. Seven hundred have been planted over the last year and a half. The second was to build “green walls.” Paulina Lopez is an organizer with the Duwamish Community Action for Clean Air, which launched the green wall project.

The South Park Merchant Association has agreed to help build more green walls and talks are underway with the Port of Seattle, whose trucks run through the neighborhood, for a bigger project.

The historically industrial neighborhood of South Park has long dealt with environmental hazards never fully remedied, including a river filled with legacy toxins and storm run off, Puget Sound’s most persistent clean water challenge. But after a report highlighted the area’s cumulative health impacts, air quality became a priority.

“You can work on air quality upstream, you know, by changing emission standards,” explains Linn Gould with Just Health Action, who authored the report and was on hand to help with planting the first green wall. “But how do you work on air quality from the community where they have the opportunity to take action.”

Initial support came from the EPA’s Environmental Justice Cooperative Problem Solving Agreement. Then the county’s wastewater treatment division stepped in with a green grant and the Seattle Parks Foundation.

“You put green walls where you can’t put trees,” says Gould. “You put them in places that are unique, where other things can’t happen.”

A Clinical Instructor at the University of Washington’s School of Public Health, Gould says a key ingredient to improving health is self-confidence and social cohesion: “When you think you can do something together, it actually improves your health and so here are these kids. They see what they can do for the community and they want to do it elsewhere. They want to make a difference.”

The youth are done planting. Now high-schooler Hodan Mire and her friend, Natividad, tie the vines of a honeysuckle around the slender cables of the hand-crafted green wall panels.

“We’re tying it around so they don’t fall,” Mire explains. “Because if they fall, they’re not going to grow like we want them to grow.”

With fresh mulch for nutrients and water retention, and Seattle’s ever present rain, that likely won’t be a problem.

Green wall project manager, Andrew Schiffer, says the concept was to merge public art with public good. Artists and welders donated their time. The site chosen for installation of the community’s first green wall, a public library across from a highway, already had a depiction of the Duwamish River on the ground.

“So, we wanted to add into that and become a part of that,” says Schiffer, pointing to raindrops suspended from metal cables. “So we have the raindrops falling down on the metal cut out panels and then the plants help the water to evapotranspirate, to go back up and evaporate.”

Evapotranspirate, a rarely used word about the way plants and trees move water into the atmosphere, sounds right for an equally rare public health project.

The installation of seven green wall panels may seem symbolic, but a granular approach is what it takes to integrate green growing things into existing hardscape or industrial landscapes, says Sean Watts with the Seattle Parks Foundation.

“These are not luxuries. These are not add-ons that you do if you’ve got the funding,” Watts says. “This kind of amenity needs to be core to creating a livable city that we want to see in the future.”

For South Park the future is now, with green walls made from climbing honeysuckle, jasmine and clematis.