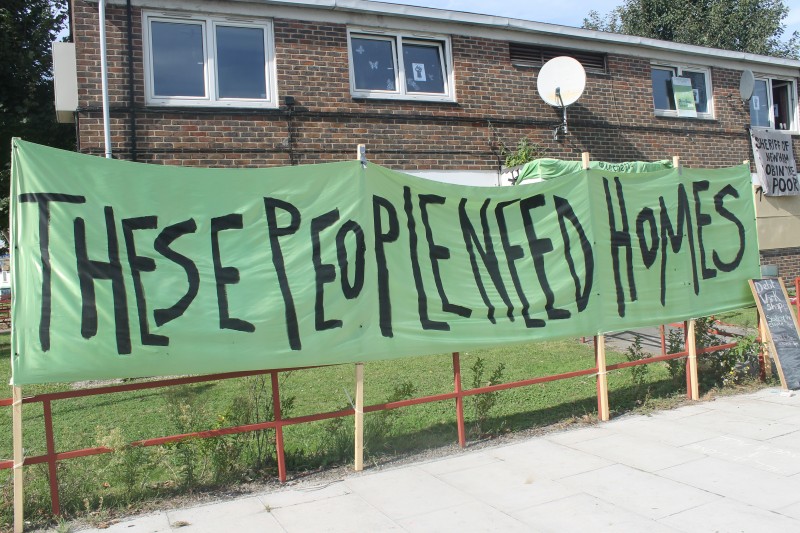 A battle over affordable housing in London drew to a close this week when a group of young mothers who had occupied a section of empty public housing left the building after signing an agreement with authorities. The group occupied the building in protest, demanding more public housing in London. The occupation reflected a trend across London, where rents have increased dramatically in recent years, forcing thousands of poor families out of the city. FSRN’s Sam Cowie reports.

The group of 29 young mothers left the property near London’s Olympic Park earlier this week after reaching an agreement with a local court. All have been rehoused locally. They formed the campaign group Focus E15 after receiving eviction notices from a local mother and baby hostel of the same name. Their aim, they say, is to draw attention to London’s rapid gentrification which is forcing poorer families out of the city.

For nearly three weeks, the group occupied an empty block of public housing on the Carpenters Estate – a low income community in Newham, East London. Long marked for demolition, today the majority of the residents have been re-located, leaving more than 600 empty public housing units.

Twenty year-old Jasmin Stone was one of the occupiers. Born and bred in East London, she says that she is being priced out of the borough.

“When the Olympics came to London, Newham council promised that it would benefit the local population – that there would be more housing and more activities – but for whom?” she asks. “Not the local working class people, just the super-rich.”

Jasmin says she living in a local mother and baby hostel with her young daughter when she received an eviction notice. When she asked about relocation options, she says she was told that she would have to move more than 200 miles away.

London rents have increased dramatically in recent years with average prices rising by 21 percent since 2010, according to LSL Property Services. At the same time, construction of public housing has all but halted and housing benefits have been severely cut.

Newham, one of London’s poorest boroughs, has been one of the worst affected. It currently has a public housing deficit of 24,000 homes. Meanwhile, Newham council recently approved the construction of 3000 private homes.

Twenty year old Sam Middleton, who was with Stone in the mother and baby hostel, says it’s outrageous to move people out of London while boarding up and abandoning public housing in good condition.

“They say there’s an acute housing crisis, but there really isn’t,” according to Middleton. “If you walk around this estate, you can’t even count how many homes are boarded up.”

It is widely speculated that politically-connected developers have plans for the property near London’s 2012 Olympic park. Newham council members have said that it is too expensive to redevelop the estate for public housing purposes.

Ayeesha Taylor is an advocate with the Focus E15 campaign and has been working housing issues around East London for the last twenty years. She says the selling off of public housing units forces poorer families into the unregulated private renters market and away from support networks – like relatives who can watch their children while they work.

“People are being forced into the private rental sector and rents are going up and up,” says Taylor. “Landlords are evicting people to get in new tenants that will pay higher prices. And so those people, especially if they’ve got children are extremely vulnerable.”

Following the eviction, Newham Council – the local authority – said they will open up forty of the empty lots on Carpenters Estate for families in need of housing. The mayor of Newham, Sir Robin Wales, also publicly apologized to the mothers, admitting that were badly treated.

The Focus E15 Group says they will continue their campaign to save the Carpenters Estate from demolition and to demand more public housing across London.