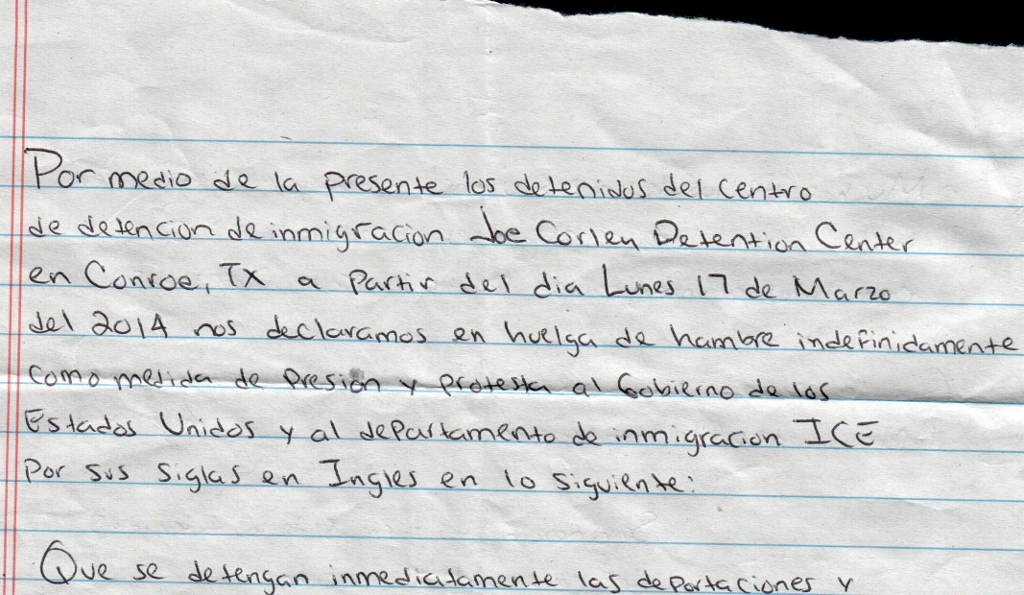 Part of a letter from the Texas hunger strikers

A hunger strike that began 12 days ago in a privately-operated immigration detention facility in Tacoma, Washington has spread to another center in Conroe, Texas. Shannon Young reports.

Just after midnight Monday morning, detainees at a facility in Conroe, Texas began a hunger strike. The move spreads the immigrant detainee hunger strike to a second private prison owned by the GEO group.

Adelina Cáceres is the wife of David Vásquez who is on hunger strike at GEO’S Joe Corley Detention Center. She says that when she saw him last Thursday, he and other detainees were already planning their protest. Her husband, a legal resident, was detained almost a year ago by agents who were waiting for him to leave his home one morning.

“What are immigration authorities or the government or officials hoping to accomplish with this?” asks Cáceres. “Why do they continue to divide so many families? Do they not think about the moral damage that’s caused?” She says say wouldn’t wish on any adult the depression, emotional, or economic damage of having a loved one in immigration detention, but warns the effects on children are much more traumatic. “Imagine what it does to kids left without their fathers, just to deport thousands, oftentimes for no good reason.”

Cáceres says agents initially didn’t give her a reason for detaining her husband, but she later found out it was related to a prior charge Vasquez had already served time for years ago. The Texas hunger strikers want an end to what they describe as double punishment for a single charge. While not named specifically in the list of demands, ICE has detained thousands of legal residents with past felony convictions and slated them for deportation under Operation Cross-Check.

The hunger strikers also want an end to deportations that separate families and improvements in the conditions at the facility.

As the hunger strike gets underway in Texas, two detainees at GEO’s  Northwest Detention Center in Tacoma, Washington continue a hunger strike which began there March 7th. Seattle-based immigration rights activist Maru Mora Villalpando has been monitoring the hunger strike there and participating in vigils outside of the facility.

Mora Villalpando spoke with two groups of detainees who were released while she was taking part in a solidarity vigil last week. When she and others approached the recent detainees to ask about conditions in the facility and their willingness to speak out publicly, they were met with extreme hesitation and told nothing the conditions have not changed with the hunger strike. “Of everybody that we talked to, only one person said ‘Yes, I will talk to the media.'” she said. “And I would ask ‘Why? Are you still afraid?’ and they’d say yes. And I would say, ‘But you’re on the outside!’ and they’d say ‘You have no idea how things are in there. I don’t want to talk.'”

Mora Villalpando says she is one of three people on the outside tasked with carrying out negotiations with ICE, but that authorities have not been responsive since an email last week.

“I’m not afraid,” said José Moreno in a phone interview. He participated in the hunger strike at the Northwest Detention Center prior to his release last Wednesday. “Thinking about all of the people inside makes me sad; seeing how they live day to day, how they talk with their relatives, with their kids. It’s something that just crushes your soul. And I’m speaking for the people who’ve been released and are still too scared to speak up. I’m not scared of reprisals in my case.”

Moreno was arrested for driving under the influence of alcohol and was imprisoned without bail for four months while awaiting his court date. He says many of those inside of the facility shouldn’t be locked up at all.

“The president please needs to do something to make a fair reform happen,” said Moreno, a native of the Mexican border city of Matamoros. “The unfair deportations need to stop, bonds need to be more affordable, and they need to stop treating us like animals. They treat us like criminals because, to them, we are – quote, unquote – ‘criminals’ and it’s not fair. They don’t even call us by name, but by numbers, as if we were objects.”

The U.S. Congress has mandated a bed space quota of 34 thousand, which President Obama has proposed lowering to 30 thousand. Cristina Parker, Immigration Projects Coordinator at Grassroots Leadership, explains the bed mandate essentially requires ICE to “hold a certain number of people – in this case, 34 thousand – in detention every single day.” Parker says no other law enforcement agency in the country requires a mandatory minimum number of prisoners at all times. “What’s really insidious about that is that the private prison industry is the biggest benefactor of that bed mandate quota because they own about half of the immigrant detention beds in the country.”

Despite protests with increased pressure tactics and deportation rates at a record high, the promise of comprehensive immigration reform remains unfulfilled… something many of the estimated three million U.S.-born children of undocumented immigrant parents aren’t likely to forget as future voters.