Bhopal, India – Thousands of villagers in the Indian central state of Madhya Pradesh are opposing a proposed diamond mining project by global giant Rio Tinto. Residents and environmental groups are poised to fight the project called the Bunder mine, which they say will cause large scale destruction of forests and affect the livelihood of the local tribal population.

HK Dwivedi is the president of PAHAL, a local NGO organizing against the mine. Dwivedi acknowledges that the project would create about 400 jobs, but it would take away the livelihoods of more than 5,000 tribal people who are directly dependent on the forest. “The water supply for more than 100,000 people residing in nearby areas is already insufficient, and must be supplemented once every 5 days during the summer.” Dwivedii adds that  Rio Tinto’s diamond processing would require more than 4 million gallons of water daily.

According to PAHAL, the Madhya Pradesh High Court issued an order in 2013 banning Rio Tinto from felling trees, but if the project is ultimately approved more than one million trees will have to be destroyed, thereby damaging the forest habitat of wild animals including leopards, tigers, sloth bears and hyenas. Dwivedi says the Forest Department has already conducted a survey and found many animals in the area, adding “the area also falls within the buffer zone of the Panna Tiger Reserve. The mining would affect the movement of the tigers.”

In a 2011, a public interest suit against the mining giant was filed by environmental activist Naleesh Dubey who charged that Rio Tinto was already mining without permission and breaking environmental protection laws. The company denies the claims and says they had permission to conduct exploration activities a the time.

Of the almost 2,400 acres of land in the proposed Bunder lease, about 75 fall within restricted forest area. But Rio Tinto claims that the proposed area is actually part of the Buxwaha degraded protected forest and that there are no villages or human habitation on the mine lease area that would be affected by the proposed mining. They also say that the company has commissioned six environmental studies in the last four years, including detailed biodiversity surveys, to understand the area, the impact of mining operations there and to help craft mitigation plans.

The Bunder project began in 2004 and is India’s first diamond discovery in the last four decades. Studies reflect the deposit holds a diamond content of more than 34 million carats. The Madhya Pradesh government issued a Letter of Intent in 2012, giving a provisional go ahead to the project. But before that provisional permission can be converted to an official mining lease, Rio Tinto must get environmental and forest clearances and have their mining plan approved.

The Anglo-Australian Rio Tinto has long been accused of various environmental and human rights violations at its mine operations around the world. Activists and local villagers in Mahdya Prasesh opposed to the mine continue to demonstrate and to ask the government to deny the final lease. 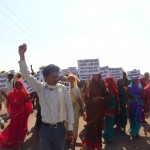 Villagers march in protest of the proposed Rio Tinto diamond mine in Madhya Pradesh, India 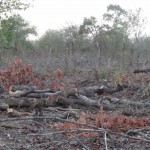 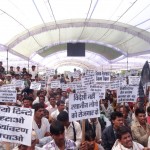 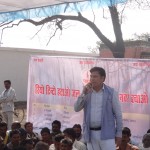