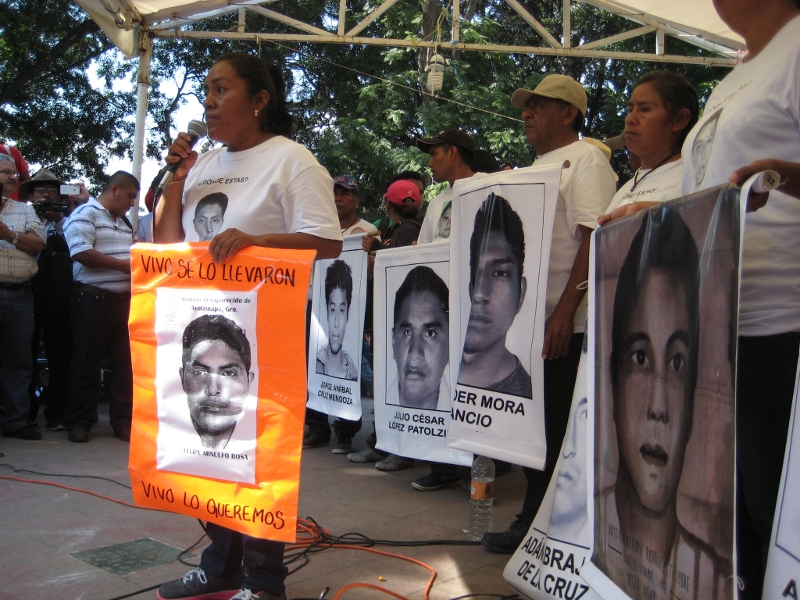 This weekend marks the one-year anniversary of the abduction and subsequent disappearance of 43 students from the Ayotzinapa teacher’s college in the Mexican state of Guerrero. Six people were killed in a series of attacks that accompanied the mass abduction. Many regard the incident as one of the worst human rights abuses to occur during Mexican President Enrique Peña Nieto’s administration. Shannon Young reports from Oaxaca.

The case of the 43 missing students and six people killed in Iguala, Guerrero during the night spanning September 26th and 27th, 2014  is one that victims’ relatives refuse to let the government close. The families still demand answers and justice, and have kept the issue in the public eye for a year now, despite government attempts to sweep the case under the political rug.

The official hypothesis, based on detainee statements, is that local police handed the students over to members of a drug gang who killed them, burned their bodies to ashes in an open-air trash dump and threw the bagged remains into a river. But internationally-recognized independent investigators have raised serious concerns about both the methodology of the official investigation and irregularities in the physical evidence.

“Our governments need to learn how to accept their mistakes,” said María de Jesús Tlatempa Bello, mother of one of the missing students. “And if they can’t solve these problems, then they need to leave it to experts who are responsible and serious.  Because the outside experts who have come in are the only people who have done any serious work on this case and supported us.”

The families say the government has diverted investigative attention away from the military and federal police present in Iguala on the night of the attacks.

The uncertainty about the students’ fate is a psychological agony the families share with tens of thousands of Mexicans. More than 26,000 people have disappeared without a trace in Mexico in the last nine years.