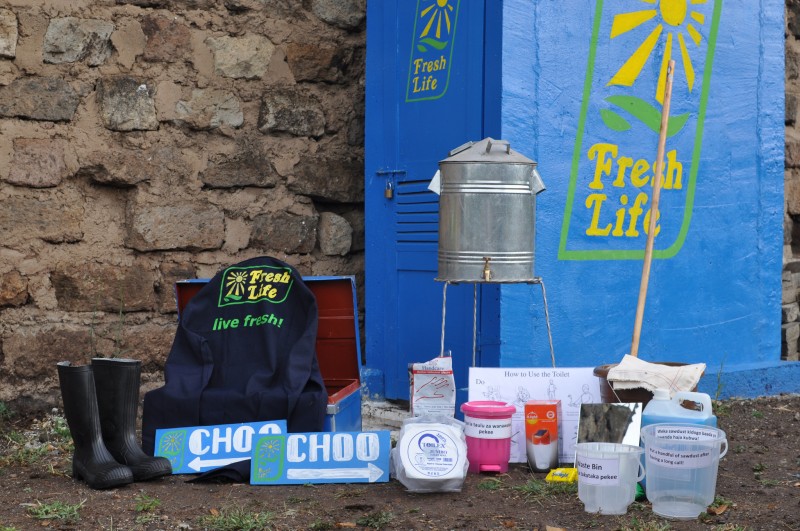 An outbreak of the Ebola virus has dominated health-related news coverage in recent days. It’s the largest Ebola outbreak ever and the first in West Africa. The disease has killed a combined total of more than 960 people in Guinea, Liberia, Sierra Leone and Nigeria during the current outbreak. The World Health Organization convened an ethic panel today (Monday) to examine the use of experimental medicines on persons found to be infected with the virus. WHO Director-General, Dr. Margaret Chan, will deliver a briefing to United Nations members in Geneva tomorrow.

Meanwhile, a much larger killer in Africa continues to take lives but with far less media attention. Disease resulting from inadequate access to safe sanitation is a leading cause of death throughout the continent. It’s an epidemic that’s preventable with proper infrastructure, something many informal settlements lack. Tanya Castle reports on efforts to prevent sanitation-related illnesses in two of Nairobi’s largest shantytowns.

The dirt road lined with barbershops, grocers, bars, schools and more leads in an out of one of Kenya’s largest slums. Approximately 700,000 people live in Mukuru in shacks made of plastic, cardboard, tarps and corrugated steal squeezed next to each other.

Until a few years ago, the only public toilets were pit latrines on the outskirts of the informal settlement. They dropped sewage right into the river below, says Anne, a Mukuru resident. It used to take Anne more than 15 minutes to walk to the rudimentary toilets.  But now she uses a Fresh Life toilet that is only a few minutes from her house. Fresh Life toilets are stand-alone concrete units that are fixed in place close to houses.

The Kenya-based company Sanergy makes the toilets. They are manufactured in Mukuru and sold for around $600 each to individual micro-entrepreneurs, who in turn charge 4 shillings (about 5 cents) per use. Each day a Fresh Life team collects the sewage and takes it to a processing plant where it is turned into fertilizer.  “The main advantage our facilities offer is they are very compact,” says David Auerbach, one of the co-founders of Sanergy. “They’re about one meter by one-and-a-half meters, so they can fit anywhere. And this is really important because it means we can get it close to where people are living and that’s important because one – obviously there’s huge convenience, but also safety.”

According to a report by Amnesty International: “The shortage of toilets and places to wash in the slums exacerbates women’s insecurity and heightens the risk of gender-based violence.”

Susan is a 23-year-old small businesswoman and Mukuru resident. She operates a kiosk and a Fresh Life toilet. “The other toilet was 3 shillings, it was cheaper but dirty,” she told FSRN. There are 420 Fresh Life toilets run by 220 micro entrepreneurs in Mukuru.

Across town is Kibera, Kenya’s largest slum, and one of the biggest in the world.  It is home to approximately one million people. Kibera, like Mukuru, faces severe sanitation challenges. It is estimated there is one toilet for every 300 residents. But one Sweden-based company is bringing toilets into homes, one bag at a time.

Peepoople is a personal, single-use, self-sanitizing, fully biodegradable two-layer bag that serves as a toilet. The inner layer inactivates harmful pathogens and unfolds to form a funnel to make use easy. The outer layer forms a protective barrier for handling. Both layers compost into fertilizer.  “All the toilets that exist in Kibera close at seven at night and reopen at seven in the morning,” says Camilla Wirseen, CEO of Peepoople-Kenya. “In between that area, people don’t have a toilet. So what do you do? You have to go to the toilet.  It’s not a problem you can wait with so that’s when these flying toilets come in place.”

Until recently “flying toilets,” plastic bags full of urine and feces, lined the narrow dirt pathways between the shacks of Kibera.  According to an NGO, approximately four million tons, or 90% of fecal sludge from Kenya’s slums, are discharged untreated into the environment every year. Each bag sells for four shillings and includes collection. “We started very, very slowly because we had to teach to go and sell one bag, one bag, one bag,” Patricia, one of Peepoople’s sales agents, told FSRN. “And me myself I was going to collect. Mind you, go and collect the uses. It was very difficult for us. The people could not even understand what we were talking about.”

Since launching in 2009, Peepoople has grown from 300 used bags collected daily to more than 5,000, preventing the dangerous discharge of fecal matter into the streets of Kibera.

Both Peepoople and Sanergy are working with the government to expand their operations and reach more low-income families in informal settlements across Kenya.