As Palestinian and Israeli negotiators continue truce talks through Egyptian and American mediation in Cairo, residents of the Gaza Strip are checking on their neighborhoods, much of which were destroyed by Israeli tanks and aircraft during the past four weeks. A 72-hour truce ends Friday morning. FSRN’s Rami Almeghari has more.

The Islamist Hamas party says that this three-day truce will not be renewed until Palestinian demands are met. They inlcude an end to the now eight-year-long Israeli blockade, reconstruction of war-torn Gaza, establishment of a sea port and renovation of the abandoned Gaza International Airport.

Israel insists on disarming Hamas and other armed resistance Gaza factions, which they designate as terrorists. U.S. Secretary of State John Kerry is in the region, pushing for a sustainable ceasefire.

While officials in Egypt horse-trade for peace, in the Shijaya neighborhood of eastern Gaza City, thousands of Palestinians are finally seeing the devastation of their homes, damaged or destroyed by Israeli air strikes, tank shells or bulldozers.

Um Mahmoud Alserswai is a mother of six children. Her one-story home was partially damaged and her anger is evident.

“We call on Palestinian negotiators in Cairo, not to bend,” she yells. “And if they do bend, we won’t.”

In the southern Gaza Strip’s rural area of Khuza’a, just a mile or two from the Israel-Gaza border fence, Mofeeda Ekdaih is grieving her 65-year-old father. He was killed when an Israeli army unit stormed their basement, where more than 45 people were taking shelter.

“He prayed the dawn after he spent the whole night praying and crying to God, asking the siege be lifted and no truce be observed,” recalls Ekdaih, describing her father and his last hours. “My father sounded like a big intellectual and politician. He spoke Spanish, French and Hebrew. My father was the chief of his family and of the whole neighborhood.

In Gaza city, hundreds of people took to the streets Thursday in support of negotiators in Cairo. Now Gazans wait, still with little electricity and fresh water, to see what comes next. Barring an extension, the 72-hour truce is set to expire Friday at 8:00 a.m., local time. 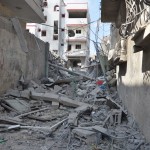 A part of destruction in Shijaya 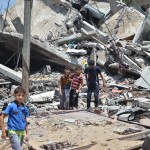 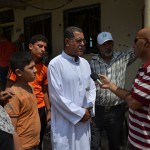 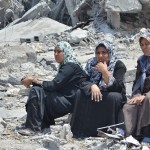