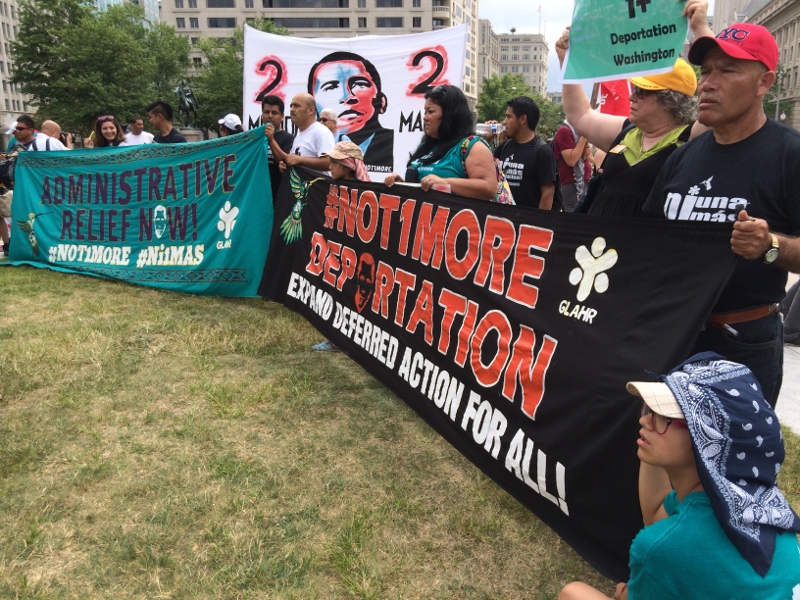 Congressional gridlock over the border crisis and immigration reform is leading up to a showdown between the legislative and executive branches. Last week the Senate failed to pass their $2.7 billion version of an emergency spending bill to address the increase of unaccompanied immigrant minors apprehended in South Texas. The House eked out a last-minute nearly $700 proposal on Friday that is unlikely to become law. President Barack Obama criticized the House’s bill as unworkable and said it will force him to act on his own. Ashley Westerman has more from Washington, D.C.

At a Wednesday meeting about legal services for unaccompanied immigrant minors, Vice President Joe Biden asked a room full of lawyers for assistance. He said an already tremendous backlog for immigration procedures like Green Card applications has been exacerbated by the recent influx of immigrant children, and the resources required to process and hold them. Biden told the attorneys the government is trying to determine how to use “the multiple assets absent the Congressional support and the real money we need to do the kinds of things we need because they left town…and they left town a long time ago, figuratively speaking, in actually engaging in this.”

On Tuesday, during a brief pro-forma session primarily called to object to taking up the pair of House bills passed last Friday, Senators made it clear they will not take action on the immigration issue this summer.

Congress has recessed for five weeks as campaigns for the upcoming mid-term elections ramp up. All 435 seats in the House of Representatives and a third of those in the Senate are up for vote. Immigration is just one of many hot button issues that have polarized the races.

Democrats paint Republicans as unwilling to approve reforms that would bring millions of undocumented residents out of the shadows. Republicans blame the increase in unaccompanied minors crossing the border on the deferred action program authorized by Obama via executive order. Deferred action, known as DACA, gives temporary legal status to qualifying immigrants who were brought to the US as children years ago.

However, immigrant advocacy groups are fed up with congressional inaction and are pushing for Obama to expand DACA. Hundreds of demonstrators marched across DC last weekend as part of the #Not1More Deportation events organized by the National Day Laborer Organizing Network. They marched from the National Mall to Freedom Plaza, where they demanded President Obama take executive action to implement comprehensive immigration reform and curb deportations.

Rosemary Meyer came all the way from Chicago and is part of the Illinois Coalition of Immigrant and Refugee Rights.

“I think families have the right to be together and not be separated by deportation,” said Rosemary Meyer of the Illinois Coalition of Immigrant and Refugee Rights. She came all the way from Chicago to participate in the march. “We’re all sisters and brothers, no matter which country we were born in or where we happen to move to.”

DC resident Brian McLaughlin says he supports immigration reform but finds it “personally sad that we’re using children as pawns when rather we should be reforming our immigration system and really doing something about it.”

On the opposite side of the immigration debate, a group calling itself the Border Convoy set out from Murrieta, California on August first on its way to McAllen, Texas. The group compares the influx of unaccompanied minors to a “foreign invasion” and supports the presence of armed militia groups in the border region.

Analysts in DC say if President Obama issues an executive order to expand DACA it could profoundly impact the midterm elections.

Mark Krikorian is the Executive Director of the Center for Immigration Studies, a DC think-tank that supports stricter immigration enforcement. He says if Obama acts without congressional approval, it will harm his credibility when it comes to border security: “In other words, no one believes that he’ll be enforcing the border in South Texas to keep immigrant young people out, if he’s just unilaterally amnestied millions of illegal immigrants to did the same thing a number of years ago.” Like many House Republicans, Krikorian says DACA sent a message that undocumented children can hope to obtain legal status in the US.

While different versions of immigration reform have called for a path to legal citizenship for qualifying individuals, outright amnesty, is not an option on the table.

With Congress out on recess and immigration reform at an impasse, little is likely to change in the short term. Unaccompanied immigrant minors apprehended at the border will continue to be processed by Department of Homeland Security and transferred into custody of the Office of Refugee Resettlement to await deportation hearings.