The NOs have it in Scotland’s independence referendum 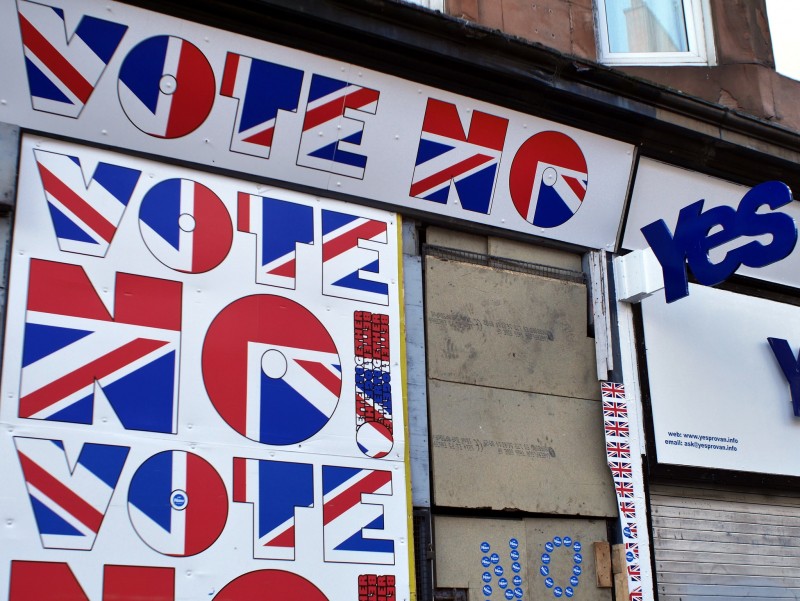 A majority of voters in Scotland have rejected independence in a referendum closely watched around the world. For more than two years the Scottish National Party campaigned to end the 307-year-old union between Scotland and the rest of the United Kingdom.

Turnout was at a level not seen since the UK-wide general election in 1950. But that wasn’t enough —  leading the SNP leader Alex Salmond to concede early Friday morning.

While the NO vote won in the Scottish capital of Edinburgh, the independence movement did carry Scotland’s largest city – Glasgow. FSRN’s Jacob Resneck reports.

As the results for Glagsow’s local council were being read in the early morning cries of jubilation erupted when it was clear that 53 percent of the city had voted YES.

But the independence celebrations didn’t last long. Across Scotland 55 percent, including 16 and 17-year-olds now eligible to vote, rejected the referendum.

First-time voter 23-year-old Lukasz Olech of Glasgow was crestfallen by the result.

“I’m really gutted – disappointed,” he said “I just hope for a better future for Scotland; Scotland deserves that. It deserves a chance to stand on its own. That’s all I can say.”

Ahead of the vote, leaders from the three main political parties had pledged to expand powers to the regions. “The three pro-union parties have made commitments, clear commitments for further powers for the Scottish Parliament,” Cameron said early Friday. “We will ensure that those commitments are honored in full.”

“We’ll see what happens. Hopefully we’ll get the powers they promised to give us. But probably not. They’re just promises that politicians never keep.”

Alex Salmond, Scotland’s first minister and leader of the Scottish National Party, said the country would hold London to its word.

“Unionist parties made vows late in the campaign to devolve powers to Scotland. Scotland will expect these to be honored in rapid course,” he said during his concession speech.

Shifting more powers to the regions could satisfy many people. NO voter 48-year-old Ruth Telford of Glasgow said she feels Scotland has real grievances against the Conservative-led government but wasn’t swayed that independence was the answer.

“Just because we’re disenfranchised with the Tory government doesn’t mean we need an independent Scotland,” she said. “Hopefully there’ll be a way forward with taxation, etc. So I’m staying positive.”

Of course there were many factors in the vote. One of them is the UK government’s growing rift with the European Union. The prime minister has proposed a UK-wide referendum in 2017 over Britain leaving the EU.

But that would be unpopular with many in Scotland, warns economist Fabian Zuleeg of the Brussels-based European Policy Centre.

“The independence question will be off the table for now,” Zuleeg said. “I would still argue that if there is a UK referendum on a possible exit from the EU that could reopen the whole independence debate in Scotland especially if there’s a significantly different vote in Scotland than in the rest of the UK.”

Defense matters also weigh in. The UK stores its entire nuclear arsenal on Scottish soil and that’s been a source of contention with the Scottish National Party which wants Scotland nuclear-free.

Despite the referendum result, there are still many issues to work out between Scotland and the central government in London – health care, tax revenue and power to local authorities. The core message from Westminster has been ‘trust us’ that they’d find solutions together as a nation.

But if Westminster backpedals on its promises, PM Cameron’s claim that the question of Scottish independence had been laid to rest for a generation could prove – premature.