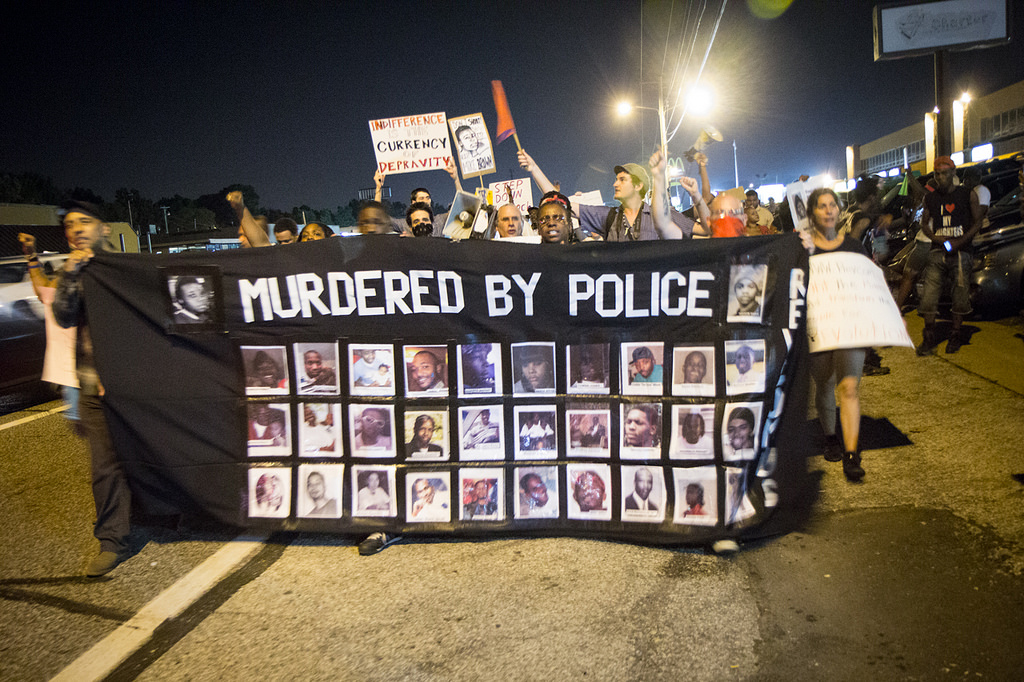 For the second week in a row,  protesters made their voices heard at the St. Louis City Council Tuesday night. Angry about what they see as inaction in the police shooting death of Michael Brown, many reiterated demands that officials remove the St. Louis County prosecutor from the case, and arrest the officer who shot the unarmed black teenager.  Residents lined up to address the Council, and audience members interjected with calls for action and chants of protest. During public comment, speakers assured Council members that they would exercise their right to vote in coming elections.

Earlier in the day in Washington, D.C., civil rights groups gathered on Capitol Hill to urge Congress to take up a measure that aims to end racial profiling by law enforcement. Advocates say the events that took place in Ferguson, Missouri this summer have highlighted a need for comprehensive law enforcement reform. Ashley Westerman reports from Washington, D.C.

The so-called End Racial Profiling Act – or ERPA – aims to prevent racial profiling by law enforcement at the federal, state and local levels. Among other things, the measure requires agencies to maintain adequate policies and procedures to eliminate racial profiling or risk losing federal funding. It would also make it easier for any individual who felt they were injured by racial profiling to have their case heard by a court.

At Tuesday’s briefing, the bill’s author is Maryland Democratic Senator Ben Cardin asked how many more cases of police shooting of black teens like Michael Brown and Trayvon Martin would it take to spark a policy change. “We all know that profiling is un-American and wrong, but we also know it’s deadly, it’s causing loss of life.”

Proponents of the law say it would also be an unprecedented step in gathering much-needed data about racial profiling incidents, as the measure would award grants and contracts for the collection of that information.

Panelist Phillip Goff, president for the Center for Policing Equity, said at the briefing that the lack of data has impeded development of effective policies to combat racial profiling. “We have a racial problem with policing in the United States and the way we’ve been approaching it has not been serious,” he commented. “We don’t have a plan because we don’t even know what the numbers are.”

What empirical evidence is available, much of it does show that law enforcement actions are not uniform across race and ethnicity. For example, a 2005 study by the U.S. Department of Labor’s Bureau of Justice Statistics shows that during that year, black drivers were twice as likely as white drivers to be arrested during a traffic stop.

However, opponents of the bill say it’s redundant, too vague and an overall a slap in the face to law enforcement. James Pasco, executive director of the Fraternal Order of Police, says ERPA is an automatic indictment of law enforcement and that “in this country, you have to prove something was done wrong before you impose sanctions on someone.”

Pasco says there is no systemic racial profiling problem in law enforcement, so there’s no need for a law to make it go away. He also says the legal remedies currently available to people who feel like they’re victims of racial profiling are sufficient.

Legal director of the ACLU of Missouri Anthony Rothert, who was also a panelist, said after the briefing that passing ERPA is especially important now since local police forces have become so militarized – another issue the events in Ferguson highlighted. “I think it was shocking to many Americans,” he told FSRN. “It was shocking to those of us in Missouri to see that kind of military force brought to people peacefully in the street.”

While political analysts say this bill is unlikely to pass, civil rights advocates are hopeful that on the heels of the recent events in Ferguson, Missouri, the Trayvon Martin case and many others, that it will gain bipartisan support and be taken up by Congress in the future.