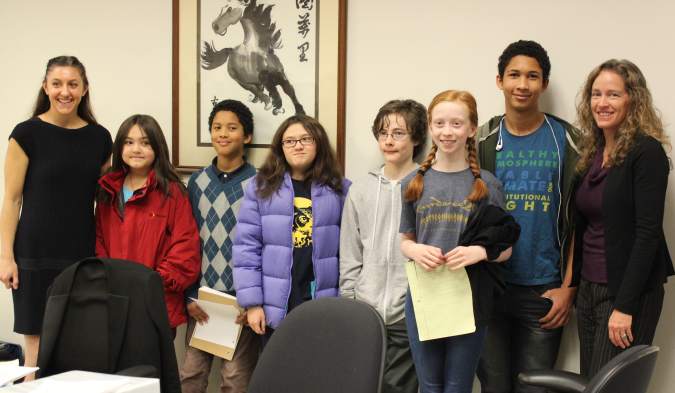 Some of the Climate 8 plaintiffs. (Photo credit: Our Children's Trust, used with permission)

A group of youths in Washington state known as the Climate 8 are claiming victory in a case they brought against the state’s Department of Ecology. In it, they argue they have an inalienable right to a stable climate system and that the agency has a mandatory duty to protect natural resources, including the atmosphere, for future generations. In a ruling late last week, a judge from Seattle’s King County Superior Court agreed with them on constitutional and public trust doctrine grounds but not on their request that the agency follow best available climate science.  Attorneys for the Climate 8 say they will continue to press the Department of Ecology on that science as the agency develops new standards for greenhouse gas emissions. Martha Baskin has more from Seattle.

The questions circling in this court room battle are fairly recent to the climate justice movement. Do youth and future generations have a legal – as well as a human – right to a stable climate system?

“If we don’t stop this, the atmosphere is going to keep getting thicker and the conditions are going to keep getting worse,” said plaintiff Athena Fain after oral arguments. The seventh-grader added that with melting polar ice caps and rising sea levels, “Seattle is liable to be under water.”

The case, which began almost a year ago, asks the Department of Ecology to develop tough new standards for cutting carbon emissions based on the best available climate science.

Washington’s Governor Jay Inslee directed the department to develop new emissions standards in the summer, but it didn’t come with a directive to follow current climate science. Attorneys acting on behalf of the youth say the new standards – slated to take effect sometime in 2016 – don’t go far enough.

“They don’t think they have an obligation to use best available science when promulgating the rule and we are arguing that that violates not only the Clean Air Act, but that it violates the fundamental rights of these kids,” says Andrea Rodgers of the Western Environmental Law Center.

Scientists like Dr. James Hansen and hundreds of others have calculated exact reductions needed to turn the global atmospheric concentration of carbon dioxide back to 350 ppm by the end of the century, notes Rodgers. This year the concentration reached 400 ppm for the first time in recorded history. Under these standards, Washington state would need to immediately reduce emissions by 4 percent a year while most of the globe would need to reduce emissions by 6 percent. She says the DEP “has all the statutory authority they need. What they need is the political will to protect the people of Washington.”

Stuart Clark, Ecology Air Quality Program Manager says the new rules will cap 60 of emissions in the state. He admits they may not be as stringent as the Climate 8 lawsuit asks for, but will cover large industrial emitters, petroleum producers and natural gas distributors. Where the agency differs strategically with the Climate 8 is whether they have an immediate obligation to use the best available science absent a directive from the governor or legislature.

Clark says the agency instead will wait until recommendations are made by scientists preceding and after the Paris climate talks about “what is necessary to achieve reasonable climate stability and how much reduction would that require across the planet to achieve that.”  The recommendations will inform the agency what its fair share is, says Clark. Until then, they’re relying on non-binding greenhouse gas recommendations authorized by the legislature in 2008 and their authority under the Clean Air Act.

Mary Wood, a noted environmental law scholar at the University of Oregon says the children’s right to a stable climate system is a fundamental one that goes back to the public trust doctrine, a legal principle with roots in early Roman law. The doctrine holds that the public has property rights to natural resources critical to survival – water, shorelines, land, even atmosphere says Wood. She explains this has been interpreted as a “constitutional principle with constitutional implications in the sense that it holds even legislatures accountable and certainly agencies like the Department of Ecology.”

Lawsuits similar to the Climate 8 in Washington state are pending in Oregon, Massachusetts, Colorado and North Carolina and under consideration in half-a-dozen other states. The idea of securing young people’s legal right to a stable climate system and forcing governments to act was the brainchild of attorney Julia Olson, founder of Our Children’s Trust. Olson says young people are disproportionately impacted by the decisions made by adults today because they’ll bear the brunt of the impacts, can’t vote and don’t have money to lobby.

“Government as a trustee of those resources has an obligation to protect them not just for us, but for future generations,” says Olson. A federal lawsuit was filed against the Obama administration on similar grounds but the government filed a motion to dismiss earlier this month. Olson says her group will appeal.

Governments are nearly out of time to make deep carbon cuts before irreversible thresholds are passed, says Wood. Tipping points create emergencies and lawsuits like those by the Climate 8. In other words, “there’s a window of opportunity that creates the urgency.” The emergency is of governments own making, she adds, they’ve neglected it for decades.

For her part, Andrea Rodgers, the attorney who filed the lawsuit on behalf of the Climate 8, says it’s a hard case to force agencies to do something about because many believe it’s impossible. She pauses briefly in a corridor at King County Superior Court, before adding, “I think the only people who don’t believe it’s impossible to drawn down our greenhouse gas emissions are the kids.”

And that’s why they brought the case.