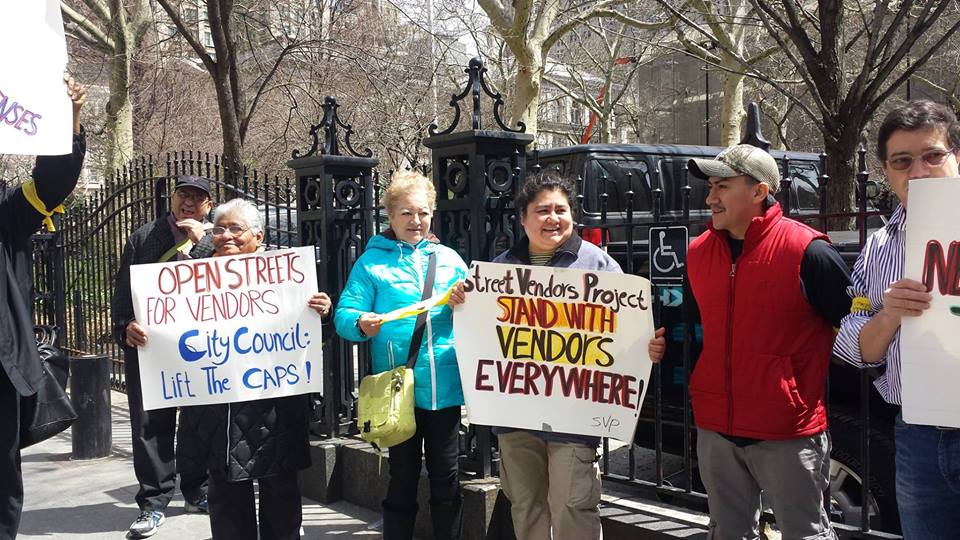 New York City’s street vendors say they have the momentum to do right now what they’ve been trying to do for over a decade: that is, decriminalize the profession. First, they want the city to remove its cap on the number of available vending permits and instead grant a permit to anyone eligible who applies. And, second, they want the city’s other regulations clarified and reduced. In New York City, Eilís O’Neill caught up with a few of the people that sell food on the street.

During morning rush hour, just outside the entrance to the R train, Primitivo Gonzales stands over a small cart filled with tamales and arroz con leche: rice with milk, cinnamon, and sugar. About six months ago, the police arrested him for selling without a permit.

“When they arrested me, they took all my stuff and told me I couldn’t sell food without a vending permit,” Gonzales says. “I was detained for about six hours,” he adds. “They took my fingerprints and my photo, as if I were a criminal.”

Gonzales doesn’t have a permit because the city’s not giving them out anymore. In the 1980s, the New York City Council capped the number of available permits at three thousand – and hasn’t increased that number since. So the only way to get a permit these days is to rent one on the black market for ten thousand dollars a year—a steep price for someone who, like Gonzales, makes only two hundred dollars on his best days.

“So what this means is that if you want to own a vending business in New York you basically have to choose to be a criminal or choose to operate without a permit in the hopes that you don’t get caught,” according to Burt Gall, an attorney at the Institute for Justice, a non-profit, libertarian law firm in Washington, D.C. “That’s a real problem when we basically say to street vendors, or anybody, is that the only way you can make a living in your chosen field is to be a law breaker.”

On Primitivo Gonzales’ day in court, lawyer Sean Basinski defended him and persuaded the judge to dismiss all charges. Basinski is the founder of the Street Vendor Project, an organization of New York City’s street vendors. As things currently stand, he says, street vendors are extremely vulnerable to police harassment because many of them are immigrants who may be unfamiliar with U.S. laws and customs or unable to speak English.

“So the vendor can’t even say, ‘What am I doing wrong? What am I doing? I’m sorry. Can I fix it? Let me move this thing,'” Basinski illustrates, saying the language barrier can also make it hard for vendors to defend themselves in court.

The lack of vending permits isn’t the only obstacle with which New York City’s street vendors have to contend. Even those with a permit can get fined, says Elise Goldin, an organizer with the Street Vendor Project.

Your table is supposed to be a certain height,” Goldin explains. “If it’s a few inches too high or too low, you could get a ticket or you could get arrested,” she continues. “Definitely selling out of a shopping cart or selling without a table is not legal, and as a result people are definitely criminalized for selling in that way.

The list of regulations goes on and on. No selling within ten feet of a crosswalk—but it’s unclear where the crosswalk starts. No selling within ten feet of a bus stop—but sometimes a whole city block is defined as a bus stop. Normally, the fine for selling without a vending permit or license is one thousand dollars. Fines for any other violation can be up to five hundred dollars. But Primitivo Gonzales has found a way to defend himself from the police: his Street Vendor Project membership card.

“People call Sanitation and the police, and they come and ask me why I’m selling there,” Gonzales says. “And I show them my ID, and then there’s no problem; they go away.”

“A lot of cities, including most of the major cities in America, have regulations that go beyond simply protecting the public’s health and safety,” says Gall. “They also extend to basically trying to protect established brick and mortar restaurants from competition, from street vendors.”

But New York City’s Business Improvement Districts don’t want to see changes to the status quo. They claim vendors clog streets and sidewalks, leave mounds of trash, and siphon foot traffic and profits away from traditional retail establishments. “We oppose any proposal to lift the cap on vending permits in the absence of a comprehensive, deliberate, and research-based study, with input from public stakeholders,” the New York City Business Improvement District Association said in a statement.

Burt Gall says this opposition is misguided: “I have never seen folks walking to a business lunch with a client who decide, ‘Oh, wait, I’m going to stop at the hot dog cart instead.’ But I also think that there is a real synergy between street vendors and brick and mortar restaurants, where food trucks, food carts, other street vendors, and retailers together end up creating sections of a city that people want to go to, where they want to patronize businesses.”

Back in Brooklyn, Primitivo Gonzales hopes the city will change its vending laws soon. He wants the city to hand out more permits and to open up the streets.

That’s what the Street Vendor Project is working on. First, they’re trying to decriminalize street vending violations, making them civil instead of criminal infractions. And, next, they’re going after the permit cap.