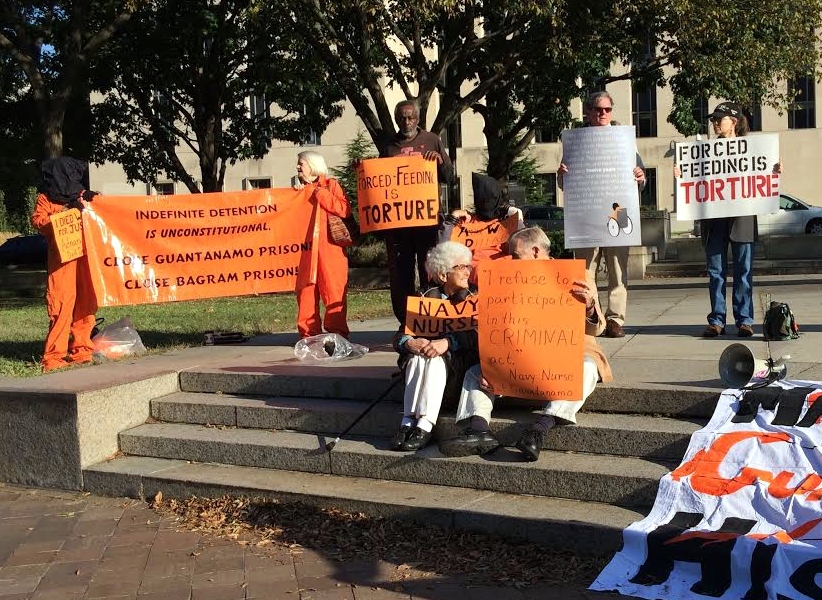 A two-day hearing wrapped up today in a case that involves a Guantanamo Bay detainee suing the U.S. government over force-feedings. As Ashley Westerman reports from Washington, D.C., the case does not seek to end the practice of force-feeding at Guantanamo Bay, but rather change the way the procedure is performed.

The petitioner in this case, Syrian Abu Wa’el Dhiab, is seeking a preliminary injunction over the way guards force-feed him. A 12-year detainee at Guantanamo Bay in Cuba cleared of charges in 2009, Dhiab has been on a hunger strike for the last seven years in protest of his indefinite imprisonment.

National Religious Campaign Against Torture Policy Director Matthew Hawthorne says this case has more potential than other challenges brought by GITMO detainees: “Certainly there are changes that could be made that would still allow the government to succeed in what they want to do, which is prevent the detainees from dying – even if that’s their choice – and also be less inhumane than it currently is.”

On Monday, U.S. District Judge Gladys Kessler heard the two sides’ opening statements and then testimony from two doctors, both of whom had examined Dhiab. On the second day, she heard from testimony from a third doctor and then the government argued its side.

In their opening statement, Dhiab’s lawyers argued there is a more humane way to force-feed their client. They would like a medical doctor to be present, for Dhiab to be able to use a wheelchair to get to and from feedings, for a one-point restraint to be used rather than a five-point restraint and, finally, for the feeding tube to be left in for three days at-a-time to reduce what they are say are painful insertions into Dhiab’s nose and throat.

Dhiab’s council, Eric Lewis, said his client does not want to die, “he just wants to be treated like a human being.”

Lawyers representing the Justice Department, however, argued the policies to manage a hunger strike and provide quality medical care are already in place at Guantanamo. They also said that Dhiab has a history of outbursts and kicking prison staffers, making the five-point restraint necessary, and that leaving in a feeding tube for days at a time could cause infection. They also argued Dhiab has been allowed to use a wheelchair since September, and that he would be able to continue do so.

Hawthorne says cases like these, regardless of whether or not they go anywhere, do spark change — both good and bad. “You know they made their force-feeding protocols secret last year, as certainly in part as the result of publicity for the inhumane treatment, but also obviously there isn’t as much actual acts of torture or something occurring either, and so that’s change for the better.” The anti-torture campaigner notes one change resulting from this specific case is the court’s willingness to be more open.

Last week, Judge Kessler denied the U.S. Government’s petition to not only close the hearing entirely to the public, but also ordered the release of video tapes of Guantanamo detainees – including Dhiab – being force-fed. The Obama Administration argued both could pose a risk to national security.

At a rally on the steps of the U.S. District Courthouse in downtown Washington, D.C., before the start of the hearing Monday members from the human rights groups Witness Against Torture and Code Pink sang and held up signs that read, “CLOSE GUANTANAMO PRISON” and “NO SECRET COURTS”.

“I think the scariest thing that’s going on now is the basic principles that are upheld in the Constitution are not being upheld by the administration,” said Helen Schietinger, an organizer with Witness Against Torture. “And that’s why I’m here is to try to get the United States administration to do the right thing.”

Past cases involving Guantanamo detainees have moved slowly through the courts. There is no set date for the judge to issue a ruling in this case.