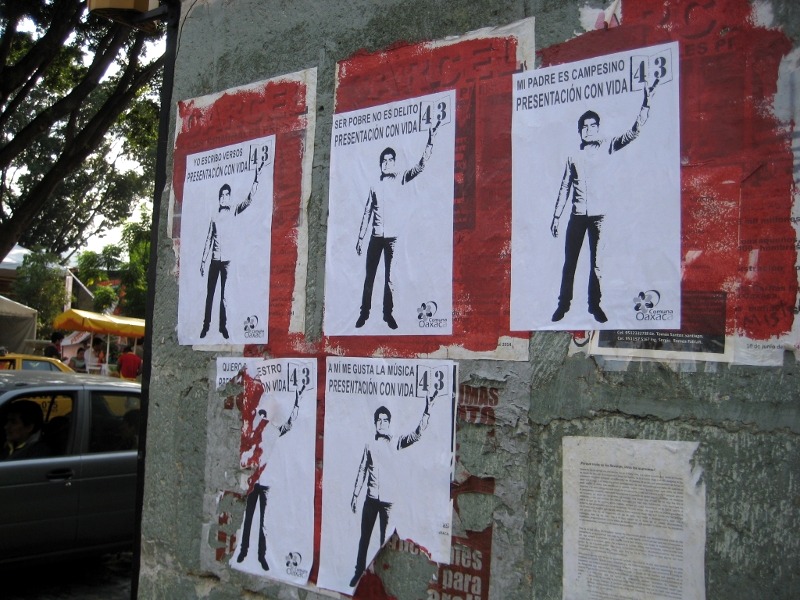 Parents of 43 missing students from a teachers’ college in the Mexican state of Guerrero launched a nationwide tour Friday to reach out to movements across the country that have expressed solidarity throughout their weeks-long search. The parents have split into three groups to cover more ground. One caravan will head south, another north and a third will canvass the state of Guerrero, epicenter of ongoing protests. The three groups will meet up in Mexico City on November 20th, the day Mexico commemorates the start of its 1910 revolution. Shannon Young reports.

In Mexico, the case of 43 missing students has sparked the largest political crisis in President Enrique Peña Nieto’s nearly two years in office, but the head of state is not in the country to attend to the matter. Peña Nieto left Mexico on Sunday for seven days of high-level economic and trade summits in China and Australia.

The 43 students have been missing since a series of police ambushes on September 26th. Mexico’s Attorney General Jesus Murillo Karam announced last Friday that three detainees gave statements indicating that the  students were all killed on the night of the ambush, and their remains incinerated.

Parents and classmates of the students refuse to accept the now official theory without forensic evidence it back it up, and the announcement intensified protests surrounding the case.

On Wednesday, demonstrators set Guerrero’s state Congress on fire. Earlier in the week protesters blocked the main terminal of the Acapulco international airport. And public outrage was evident in actions throughout the week targeting government buildings, federal highways, offices of political parties and property of large corporations in the states of Michoacan, Chiapas and Oaxaca.

“We’re seeing this right now because of the teachers’ college students, but what if the case had never happened?” says José, the uncle of missing student Christian Colón Garnica, who – like many of the students’ relatives, gives only a first name when speaking publicly. “This reaction has been a long time coming. It’s not spontaneous. The government blames organized crime. That’s a lie because they’re part of organized crime.”

As demonstrators criticize both the government’s handling of the case and Peña Nieto’s decision to leave the country in a moment of crisis, on Monday the head of Mexico’s armed forces called on society to close ranks with the president.

Amid the protests in Guerrero this week, the G-20 quietly held a first-ever energy summit in Acapulco. Mexico recently finalized legislation to de-nationalize the country’s oil and gas sector.