Keystone XL pipeline defeated in the U.S. Senate by a one-vote margin 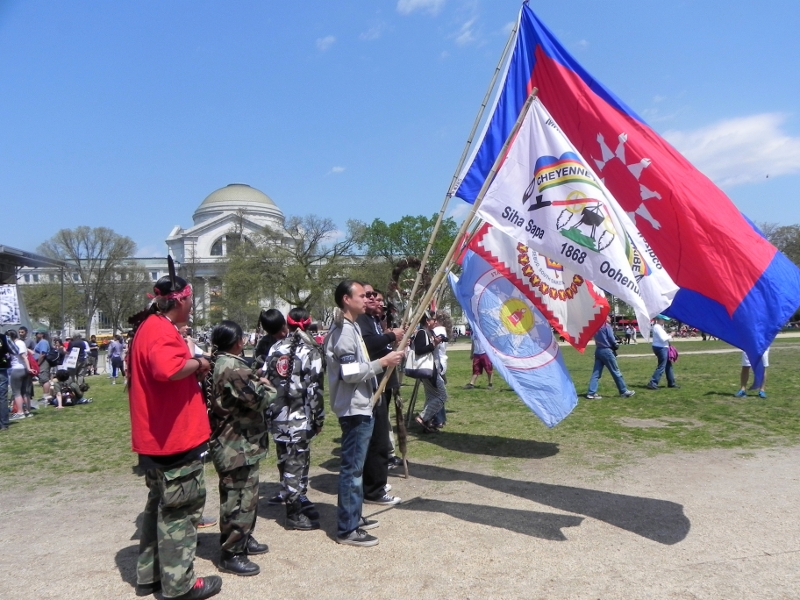 Indigenous activists lead an April 2014 march of the "Cowboys and Indians Alliance" bearing the flags of their nations.

The U.S. Senate failed to pass legislation by a one-vote margin late Tuesday to approve construction of the Keystone XL Pipeline. The dramatic vote, which comes just days after the House voted to approve the controversial project, means the issue is now dead for the remainder of the session. But as Ashley Westerman reports from Washington, D.C., Republicans intend to bring it up early in the next Congress.

Just moments after the results of the vote count on the Keystone XL Pipeline approval bill were announced, a Native American victory song filled the Senate chamber. C-SPAN captured the moment.

But earlier Tuesday morning, in kicking off six hours of debate on the legislation, one of the bill’s co-sponsors Louisiana Democratic Sen. Mary Landrieu said the U.S. already has 2.6 million miles of pipeline and that the new pipeline would only add about a thousand miles more. “What is everybody upset about?,” she asked. “We’ve been building pipelines in this country for a long, long time and we need to build this one. This is about energy independence, this is about jobs, that’s why I’m here, this is what the people want.”

Landrieu, chairwoman of the Senate energy committee, started a political firestorm last week when she urged her Senate colleagues to take up the bill. She is locked in a tight race to keep her Senate seat in Louisiana, which is dependent on the energy sector. But her efforts may have been in vain as her Republican challenger, Rep. Bill Cassidy, quickly sponsored the Keystone XL Pipeline approval bill that successfully passed Friday in the House.

Environmental advocates say there is much to be upset about, as the XL portion of the pipeline would catalyze the market for the most carbon-intensive oil on the planet with devastating results to the climate.

Louisa Abbott Galvao, climate and energy associate with Friends of the Earth, says the difference between tar sands oil and regular crude oil is the extraction process. Unlike regular oil that is pumped out of the ground, Galvao says tar sands is a combination of sand, clay, water and bitumen, which is extracted as an unconventional source of oil. “It has the consistency of peanut butter so it has to be virtually baked out of the ground in order the bitumen be separated from the rest of the mix,” she explains. “And this is an incredibly intensive extraction and refining process, which results in the emission of 3 times the emission of greenhouse gases than gasoline.”

While a State Department report released in January found that the project would very likely not have a significant effect on greenhouse gas emissions, opponents dispute those findings.

Melinda Pierce, legislative director of the Sierra Club, says the assessment failed to look at the whole picture and noted the evaluation is still ongoing. Further, she says, the State Department is being held up because of litigation in Nebraska about the route of the pipeline — a decision that is supposed to be ruled on in the coming month. She adds that “any move by Congress to try and preempt the decision when much remains to be followed through would be injurious.”

For six years, President Barack Obama has also maintained this wait-and-see approach for the pipeline. He’s repeatedly said he’d prefer to wait until the full State Department evaluation was complete. Even if the bill did pass both chambers of Congress this week, he was still expected to veto the project.

But proponents of the pipeline say the project has been delayed long enough.

Florida Petroleum Council Executive Director David Mica says he doesn’t see the Keystone XL Pipeline as an environmental or transportation issue, only that it will move the U.S. towards energy independence and create thousands of much-needed jobs. He says if the Canadians are going to produce the oil anyway, the U.S. should benefit.

“And it’s going to be brought to market one way or another,” Mica told FSRN. “So bringing it to American refineries makes a great deal of sense in the sense so that we can have those American jobs at the refineries, those American jobs in the construction of the pipeline and security that product for our nation’s energy future.”

The State Department says that while the two-year construction phase of the Keystone XL Pipeline is projected to create about 2,000 jobs, TransCanada estimates that once finished, only about 50 new American jobs will be needed for the operational phase.

In reaction to the bill’s defeat Tuesday in the Senate, incoming Senate Majority Leader Kentucky Republican Mitch McConnell told the press the Keystone XL pipeline will be on the agenda early in the next Congress, and that he is confident it will succeed.

North Dakota Republican Sen. John Hoeven, who co-sponsored the Senate bill with Landrieu, said at the same press conference the project comes down to its merits: energy, jobs, economic growth and building a secure energy future for the U.S. Hoven added “the American people know it and overwhelming they’re saying to their elected representatives and senators, ‘Approve this project!’ And so we’re not going to stop until we do.”

But environmental advocates are also moving forward and say momentum is gaining in the fight against any expansion of carbon-based energy infrastructure in the country in order to achieve energy independence through clean sources like wind and solar.

Louisa Abott Galvao of Friends of the Earth says “this movement is increasing, mobilizing and it’s organizing and we’re going to fight every new fossil fuel project.”