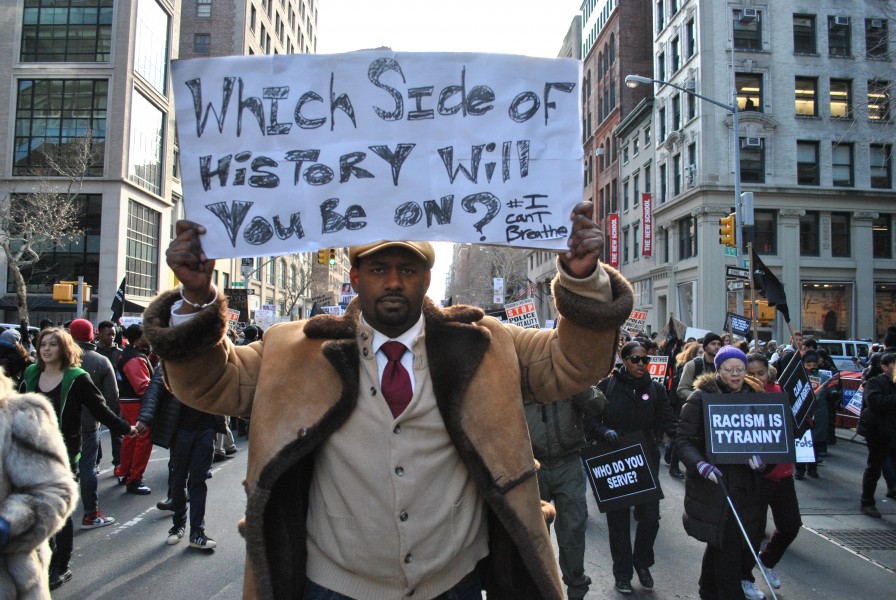 Protesters took to the streets of New York, D.C., Oakland,  and cities all across the U.S. over the weekend calling for police accountability. In New York, tens of thousands of people took part in the demonstrations, which swelled on the heels of recent decisions by grand juries in Ferguson, Missouri and Staten Island, N.Y.  to not  indict white police officers involved in the killings of unarmed black men. In Ferguson last month jurors voted against charging Officer Darren Wilson for fatally shooting 18-year-old Michael Brown,  triggering angry protests nationwide.  Then, earlier this month a New York grand jury similarly did not bring charges against Daniel Pantaleo, an NYPD officer who was videotaped strangling Eric Garner — a father of six who died of asphyxiation in July.

FSRN’s Peter Rugh joined demonstrators at what was billed as the “Millions March” in Manhattan on Saturday, where a protest that sometimes stretched twenty blocks clogged the city’s arteries as it traveled through midtown then south to NYPD headquarters. He filed this report.

Eric Garner’s last words, “I can’t breathe,” have become a mantra at demonstrations against racist policing in New York City and across the country. Many of those attending Saturday’s rally said they have personally experienced or been affected by racial profiling. The NAACP points out the incarceration rate for African Americans is nearly six times that of whites.

Nicholas Heyward, whose 13-year-old son  Nick Jr. was fatally shot by a police officer in a Brooklyn housing development twenty years ago while playing with an orange and brown plastic toy rifle,  was at Saturday’s march.  Heyward senior has not given up the hope that one day the officer who shot his son will stand before a judge — an expectation that so far has gone unfulfilled. However, he has been a steadfast presence at rallies for others slain by the NYPD ever since.

Family members who, like Heyward, have lost loved ones at the hands of the police, led the Millions March as it shut down major thoroughfares, including Broadway, before arriving downtown at One Police Plaza — NYPD headquarters. “I’m glad it is finally coming to light and people are finally beginning to see that the system we live under is an unjust system, which allows the police to kill innocent, unarmed humans,” said Heyward. “People are tired of it.”

While the deaths of Garner and Michael Brown helped to set off what is now a national movement for police reform, two other recent high-profile killings bear striking similarities to the death of Heyward’s son. Akai Gurley, 28-years-old and unarmed, was shot by a police officer in a Brooklyn housing development this November. As in the death of Nick Jr, police blamed dim lighting for their failure to assess the situation before discharging their weapons.

That same month, a police officer in Cleveland fatally shot 12-year-old Tamir Rice while he was playing with a toy gun in a park. A caller had informed a 911 dispatcher in advance that the gun appeared to be fake.

At Saturday’s march, Jivonne Gilmore, a social worker from Brooklyn was on hand with three grade-school-aged children in tow. “I brought my sons out here and my son’s friend because enough is enough,” she said. “This is about educating the public about police brutality, about how African-American males are affected by the injustice that continues to happen in this country.  And they need to see what goes on and they need to be a part of the movement of ‘my life matters, their life matters, their kid’s life matters. We matter.’”

Women are also deeply impacted by racial profiling not only as targets, but as partners, siblings, and parents. Gilmore worries what will happen if the voices now mobilizing nationwide go unheeded. “I’m always worried for my kids,” Gilmore told FSRN. “Whether it is change in the police department, whether it is change in policy, there needs to be also changes in just the way individuals see us and treat our children over all. So, there needs to be major change.”

Major change is exactly what organizers of the Millions March are aiming for. Their immediate demands, listed on the march’s website, include an indictment of Daniel Pantaleo for the death of Eric Garner and the creation of an independent prosecutor’s office to investigate allegations of police misconduct. Their broader goals include housing, educational and labor reforms and an end to mass incarceration; systemic changes that they say must “acknowledge and address the structural violence and institutional discrimination” black and brown communities face in the United States.

The U.S. Justice Department has opened federal civil rights investigations into the cases of Eric Garner, Michael Brown and the police departments in Cleveland and Ferguson, Missouri. But until wider, systemic change is achieved, demonstrators said they intend to keep hitting the streets.