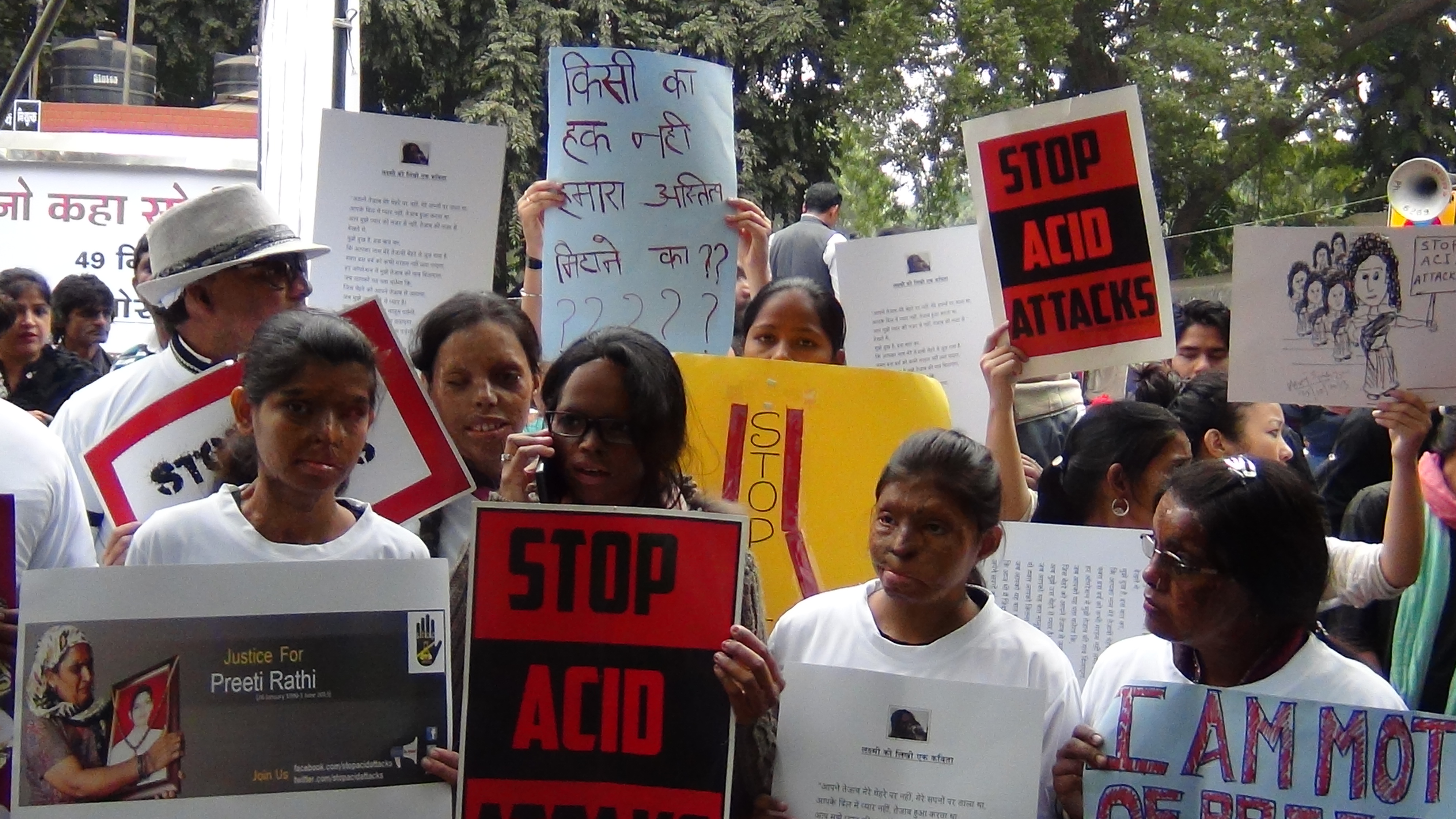 Each year about 1500 acid attack cases are reported around the world. According to the UK-based Acid Survivors Trust International, the actual figure could be much higher because many victims are reluctant to come forward. A large number of these cases occur in South Asia. While overall the region has shown some progress in recent years, acid attacks in India appear to be on the  rise. Alarmed by the increase, acid attack survivors have launched a campaign to demand immediate measures to help prevent attacks and rehabilitate survivors. Bismillah Geelani reports from New Delhi.

Thirty-year old Geeta, who uses only her first name, is a single mother from the northern state of Uttar Pradesh. She started selling tea to make a living after her husband abandoned her and their baby daughter nine years ago.

One day, a customer proposed marriage to Geeta. She politely turned down the proposal, but the man took offence to the rejection. He first threatened Geeta with dire consequences but when she refused to change her mind, he did something that still makes her tremble with horror.

“He came with a plastic container in his hand,” she recalls. “There were a few customers around. He waited for them to leave and then when I was about to light the gas stove, he threw the contents of the container onto my face. Some of it fell on my dress and the synthetic fabric melted and started dripping down. Soon after I saw the same thing happening to my skin. I was screaming in pain. Some people from the neighborhood came and put me under running water, but by then my eyelids were stuck together and I was unable to see.”

After a couple of surgeries, doctors opened Geeta’s eyes and she can now see again. But the medical bills drained her financially. She can’t afford further reconstructive surgeries and there’s no one to help her. Her tea shop also closed down because customers stopped coming.

“It’s as if everything ends after an acid attack,” she told FSRN. “Your face turns into something that makes people feel sick. They don’t want to look at us or even talk to us. Even our relatives don’t want to have anything to do with us so they don’t invite us to family functions like weddings, etcetera. Sometimes even our own children are afraid of us.”

Geeta is in New Delhi along with dozens of other acid attack survivors campaigning for prevention and rehabilitation measures. They organize protests and public meetings to draw attention to their demands, which include introducing a law against acid attacks, regulating acid sales and providing free treatment for survivors.

“Acid has become a weapon of choice,” says Ashish Shukla, member of the New Delhi-based advocacy group Stop Acid Attacks. “People have used it in family feuds, in group rivalries, in land disputes, and even in petty fights between youngsters. But an overwhelming majority of these attacks are against women, and the main reasons behind them often involve one-sided infatuations and refusals of marriage proposals.”

India did not recognize acid attacks as a specific criminal offence until 2013. Therefore, official figures on such attacks prior to that date are unavailable. But incidents of acid throwing are frequently reported from across the country and campaigners estimate nearly 200 attacks occur here every year. The targets in most cases are women.

Senior Supreme Court attorney Kamlesh Jain has represented many acid attack victims and says the criminal justice system has let them down. “The trials in acid attack cases drag on for years even though there are usually very few witnesses to examine,” she explains. “I have handled cases that took eight years and they were supposedly expedited. The courts at all levels are very insensitive. In many of these cases, the Supreme Court has handed down only one, two or three-years punishments whereas the victims’ whole lives are ruined. The government is also not doing much ad the victims continue to suffer.”

Jain insists India needs to learn from neighboring countries. She points to a steep drop in acid attacks in Bangladesh after it banned over-the counter-acid sales and introduced harsh penalties. In Pakistan, acid attacks can be prosecuted as a form of terrorism.

Used as a cleaning product, acid is very cheap and easily available in India.

In 2013, as a result of a lawsuit by a survivor named Laxmi, the Supreme Court ordered the government to regulate the sale of acid and provide compensation, free treatment and rehabilitation to survivors. The court also called for a specific law to deal with acid attacks, but Laxmi says the orders remained only on paper.

“The Supreme Court had said acid won’t be freely available, but it still is and more acid attacks are ocurring,” she remarked. “The court also said survivors would get immediate compensation, but nobody has received any thus far. Our treatment has stopped. We are suffering and our families are suffering with us. I have been through seven surgeries and more have to be done. Some women have to have more than fifty surgeries. It is not easy, but nobody seems to care and nobody is helping.”

Laxmi was just 15 when her friend’s brother threw acid on her while she was waiting for a bus in a busy Delhi market. Laxmi had previously rejected the advances of her attacker, a man twice her age. The acid disfigured her face, chest and arms. Since then, she has become a full time campaigner for acid attack survivors. Her work has been widely acknowledged and she has won several awards including the US Department of State’s International Woman of Courage Award.

While activists like Laxmi campaign for a tough law against acid attacks, they are fully aware that mere laws cannot eradicate the problem that largely remains a brutal form of violence against women.

They say legal measures to promote gender equality and deep changes in social behaviors and attitudes are also part of the solution.