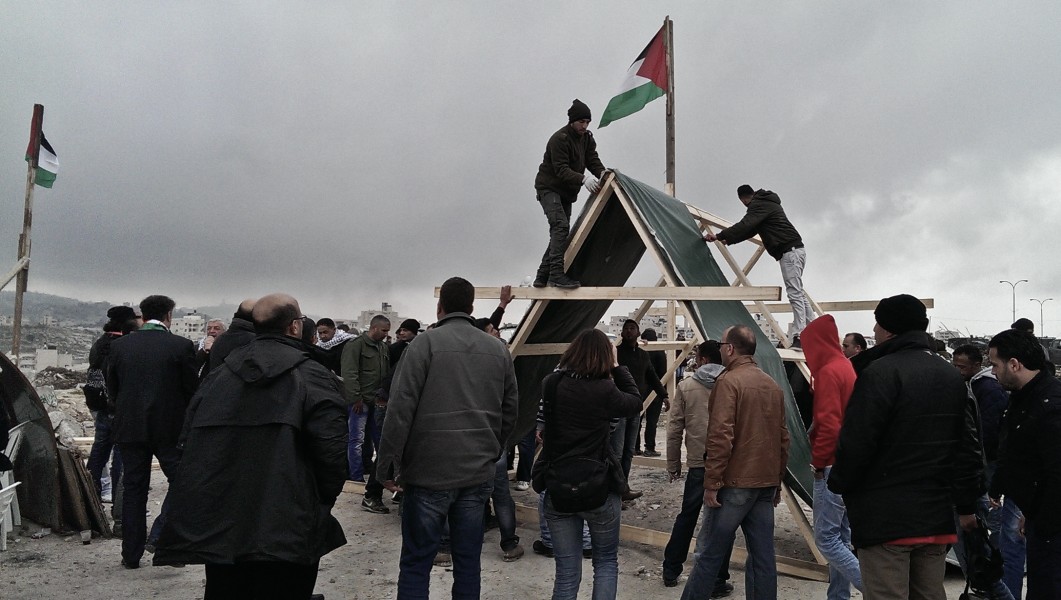 A new Palestinian protest camp was recently set up in the outskirts of Jerusalem. It has already been demolished several times by the Israeli authorities – only to be rebuilt – and it is just the latest in a decade of non-violent protests and initiatives. Though skepticism and frustration are widespread among the Palestinian community, the non-violent resistance movement insists that this is the only solution to gain justice and freedom. FSRN’s Lena Odgaard reports.

“Freedom for Abu Dis” chants a small group of Palestinian men and women standing in the middle of a small campsite consisting of two tin shacks.

Big red and green letters spray painted on one of the shacks read ‘Bawabet al Quds’ – Gateway to Jerusalem.

Located on a hillside about two miles east of Jerusalem, the camp overlooks neighboring Palestinian villages, a number of Bedouin communities from the Jahalin tribe and the characteristic red-roofed houses of the Israeli settlement Maale Adumiim.

Young men haul wooden beams to the camp to build the frame of a small tent without paying much attention to the growing number of Israeli military jeeps and soldiers surrounding the camp.

36 year-old Thair Anis, leader of the Popular Struggle Coordination Committee for Jerusalem, explains that a group of local residents set up the small protest camp after people in Abu Dis noticed Israeli authorities had begun working in the area.

The E1 is an area of about  3000 acres east of Jerusalem which lies in the path between the Maale Adumiim settlement bloc and Jerusalem. Past Israeli plans to create a physical link between the two locations, effectively annexing close to 12000 acres of Palestinian land, received international condemnation. As this would also cut off the only road accessible for Palestinians linking the south and north, critics warn that if the plan is carried out   it will essentially divide the West Bank in two – diminishing any prospect of a viable Palestinian state.

The office of the Israeli Coordinator for Government Activities in the Territories stated via email that the ongoing work is to – quote – “promote a plan that would regulate the residency of the Bedouin community.” The official’s written statement indicated representatives of the community participated in the plan but members of the Jahalin tribe, who took part in the tent protest, dispute this.

The protest camp attracts people from nearby areas as well as leaders of the Palestinian non-violent resistance movement from throughout the West Bank. One of them, Abdullah Abu Rahmah from the village of Bil’in, guides the construction of the tent. For him Bawabet al-Quds is a symbol of continuous non-violent struggle for rights and freedom.

“We protest not only against the wall or settlements in our villages but against the occupation everywhere,” Abu Rahmah commented to FSRN.

Bil’in recently marked ten years of weekly demonstrations against the barrier, which Israel started building in 2002. In Bilin it cut local residents off from 60 percent of their fields. A few years ago Bil’in saw the fruits of their work as the barrier was moved back. Though 370 acres of the land are still inaccessible, Abu Rahmah sees the case of Bil’in as a model for success, saying they “are working towards an Intifada of non-violent resistance with all people from north to south. We succeeded in our village but I work now to succeed in my state to remove the occupation.”

But the group of 50-70 people present at the Bawabet al-Quds protest camp doesn’t look much like an ‘Intifada’ or a popular uprising. 31-year old school teacher and social activist Afaf Faroun says most Palestinians choose to stay at home. But as a mother of three, she also doesn’t want her children to take part in demonstrations with her.

“I don’t like them to take part in something like this. Because children are suffering in Israeli jails and the soldiers don’t care if it is children or adults,” she said.

Bawabet al-Quds imitates previous protest camps in areas in the West Bank under full Israeli control. And like previous camps, Bawabet al Quds is not allowed to stay for long.

Only a few hours after the raising of the tent the Israeli military storms the camp, dispersing the crowds using tear gas and sound grenades. Soldiers load the tent and tin shacks onto trucks and a bulldozer flattens the area.

Palestinian politician, Mustafa Barghouthi, who has been at the protest all day makes sure to collect the Palestinian flag from the demolished camp. According to him, the non-violent resistance movement is only just starting – and so is Bawabet al-Quds.

“They have demolished this place five times already and we have rebuilt it six times,” Barghouthi says. “So now they demolished it for the sixth times and I told the officer we will build it again. Even if it takes us hundred times, we will rebuild and build it and build it again. We are fighting here not just for a piece of land but for the future of Palestine.”