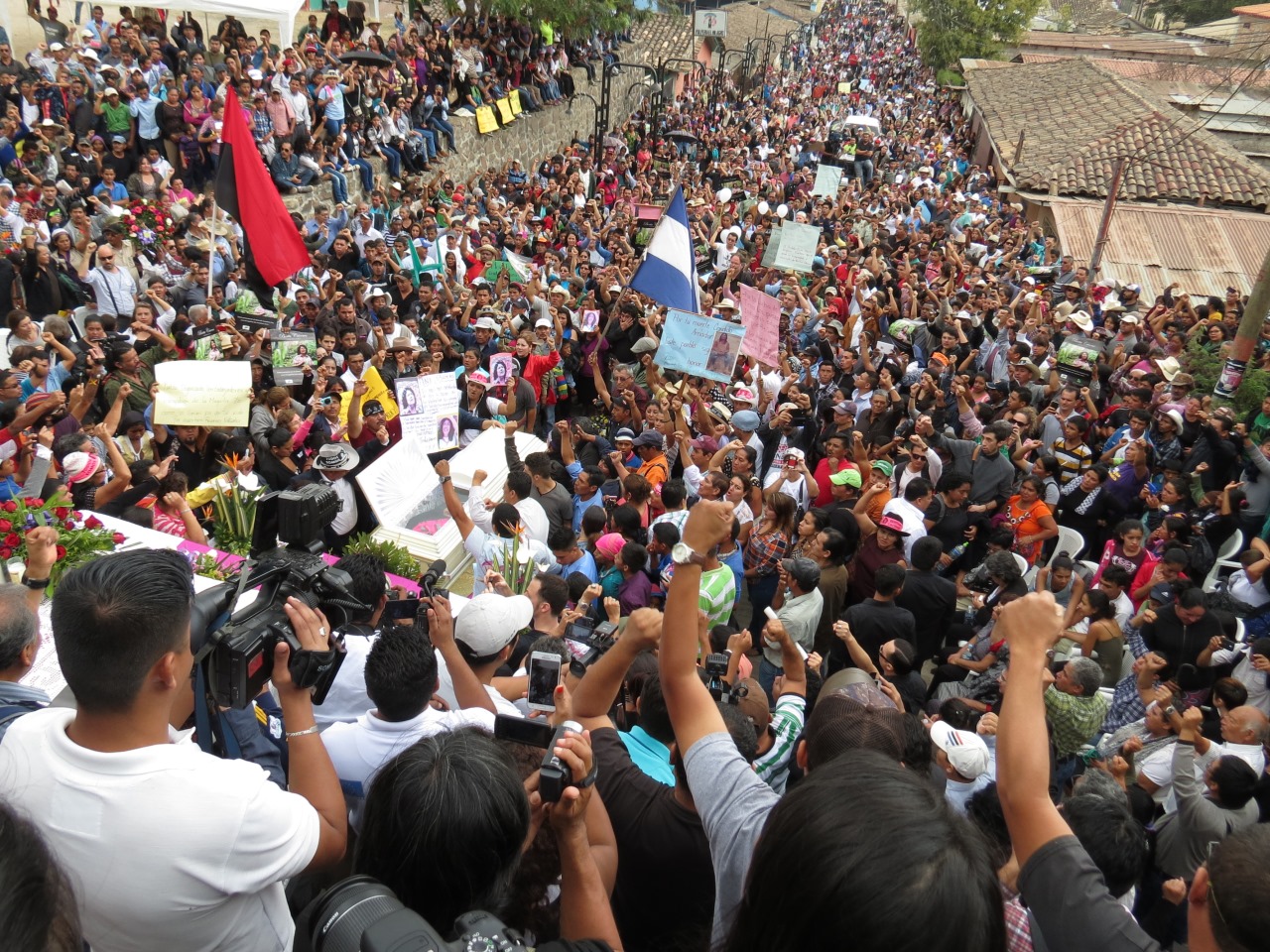 Thousands of mourners pack into the streets of La Esperanza for the funeral of Berta Cáceres. (Photo credit: Giorgio Trucchi | Rel-UITA)

Thousands of people from across Honduras traveled to the western city of La Esperanza over the weekend to attend a wake and funeral services for Berta Cáceres. The internationally recognized indigenous and land rights activist was murdered early Thursday morning when armed gunmen stormed her home and shot her dead, wounding a house guest in the process. Mourners across the region and around the world marked her death, and organizations in Mexico are calling for the safe return of the crime’s sole witness, also a recognized environmental campaigner who was wounded in the attack. Shannon Young has more from Oaxaca, Mexico.

The funeral of slain Honduran activist Berta Cáceres drew thousands of mourners to her hometown of La Esperanza over the weekend. Her wake became an impromptu candlelight protest calling for justice. Her funeral included a miles-long march from her mother’s home to a hillside chapel to the cemetery, with a line of mourners stretched out as far as the eye could see.

Olivia Zúñiga, one of Cáceres’ daughters, told Honduran community broadcaster Radio Progreso, she wants an immediate halt to the extractive projects her mother opposed and that she doubts the government’s ability to carry out an impartial investigation into the murder.

“I’m asking other countries to immediately suspend their financial backing of the government of Honduras because it’s a state-sponsor of human rights violations, it won’t guarantee the lives of human rights defenders, not even when they have precautionary measures granted by the Inter-American Commission on Human Rights,” Zúñiga explains. “I also demand the government of Honduras sign an agreement with the Inter-American Commission on Human Rights so that international investigators and human rights experts work on this case alongside the special prosecutor’s office because we need some kind of guarantee of an impartial investigation.”

Zúñiga says the investigation appears to be off to a bad start with the country’s top security chief claiming that Cáceres turned down police protection measures, something her family says is untrue. Officials have arrested three people thus far: two members of COPINH, the indigenous rights organization Cáceres co-founded, and a neighborhood security guard.

And Mexican environmental and social justice organizations are raising red flags, concerned about the safety of Gustavo Castro, a prominent Mexican anti-mining campaigner and sole witness to the crime. Castro was wounded in the attack that killed Cáceres, but faked death until the gunmen left. After giving lengthy and repeated depositions to Honduran authorities, Sunday morning, Honduran immigration officials refused to let him board a plane bound for Mexico.

According to a Monday press release from Otros Mundos Chiapas, an NGO Castro leads in Mexico, Honduran authorities took the activist from the Mexican Embassy in Tegucigalpa back to the western city of La Esperanza. Honduran investigators say they need Castro to expand on his deposition, but colleagues say he is being treated as a detainee and is suffering psychological abuse after witnessing the murder of his friend.

Domingo Lechón of Otros Mundos Chiapas has been able to talk to Castro since the attack, and told Latin American radio network Radio Mundo Real how Castro described his treatment at the hands of Honduran police: “He’s a victim but they’re treating him like a suspect. They didn’t return his belongings, his luggage, to him. They kept him in the same blood-stained clothes for three days straight, transferring him around. They weren’t letting him sleep, they hardly let him eat. He wasn’t given medical treatment, despite his wounds, until much later. He noted that they were trying to wear him down to weaken him psychologically. We think they’re trying to get him to implicate someone from the organization, from COPINH, so that they can open up a line of investigation that points away from the ones we think are key – like investigating the companies Berta was fighting against.”

As of deadline, Castro remained in the so-called protective custody of Honduran authorities. The country’s Secretariat of Foreign Affairs says the government is pursuing all lines of investigation to quickly solve the crime and is receiving international support to that end from the U.S. government.