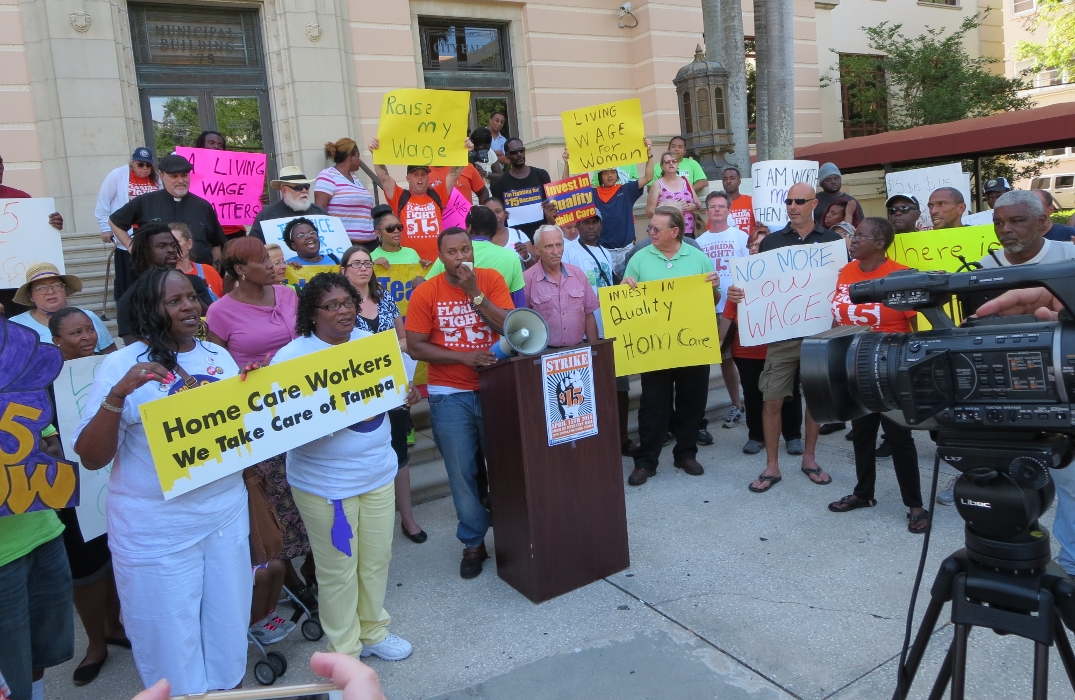 Fast food workers, home health care assistants, adjunct professors and many other types of low-wage workers walked off the job today across the United States to call for an hourly minimum wage hike to $15. Samuel Johnson reports from St. Petersburg, Florida.

Fast food workers at Burger King started the day of events in St. Petersburg by walking off the job at 6 a.m. The Fight for $15 movement gathered in front of city hall for a lively rally later in the morning.

“Minimum wage is minimum wage for a reason,” said Dylan Kinder, a 23-year-old full time fast food worker who participated in the one-day strike. “Living wage is how much I can sustain life off of. You can’t expect me to live a full life if I have to worry about do I want to pay my electric bill or do I want to buy groceries this week. That should never be a question.”

St. Petersburg city council member Darden Rice was one of several local politicians on hand observing the event. While local leaders aren’t contemplating a minimum wage hike, Rice said the city is poised to adopt an ordinance this Thursday that will help protect its residents from wage theft. “This ordinance provides an easy way for citizens to go through a city administrative process,” she told FSRN. “You don’t have to get an attorney. You don’t have to go to your employer first. You can come straight to the city and the city will administer a process. Most of the claims get settled in conciliation. But if they don’t, and it goes forward and the employer is guilty, they owe three times the amount owed to the employee.”

The rally in St. Petersburg was one of dozens to take place across the country in what has been the largest organized day of action yet in favor of a $15 an hour minimum wage.